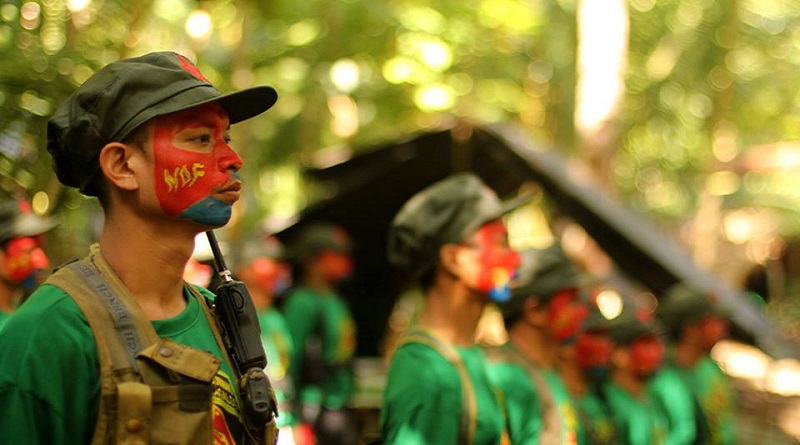 Humiliated in the face of defeat and supremacy of guerrilla tactics, the enemy desperately attempted to twist the facts of the incident to conceal the bare-faced rottenness of the AFP’s counter-insurgency plan Development Support and Security Plan Oplan Kapayapaan.

The battle report submitted by the Mt. Apo Subregional Operations Command showed the NPA unit’s mastery of terrain, correct reading of the enemy situation and the superb use of guerrilla tactics in a swift tactical offensive directed against a fascist PNP unit that, along with the AFP, had perpetrated and continue to perpetuate the atrocious human rights and international humanitarian law violations in Davao del Sur and North Cotabato provinces.

On March 8, at 2:20 am, the NPA unit carried out an order to exact revolutionary justice against Marlon Lomantas, a former AFP soldier turned active intelligence agent of the 39th IB and a known drug trader and user in Brgy. Sibayan, Bansalan.

An NPA platoon was positioned at the mountainside of Brgy. Sibayan in order to frustrate military and police operations in the area. Another squad took position nearby. The NPA command was in anticipation of police and military operations to be coordinated by the 39th IB. At 6:15 am, heavily armed police personnel aboard two mobile PNP vehicles were dispatched, apparently to reconnoiter and clear the area before deploying its soldiers.

The first police vehicle passed by the NPA ambush position site at 6:35 am. The NPA squad desisted from striking when it saw civilians riding in motorcycles were in close proximity to the moving PNP vehicle. The second police vehicle passed by subsequently. At 7:10 am, the NPA squad, positioned eight meters from the road, proceeded to ambush the passing mobile vehicle. After the initial five-second volley of gunshots, the NPA commander called for the enemy troops to surrender and lay down their arms.

The PNP personnel, however, retaliated with numerous return of fire. A wounded police officer jumped off from the vehicle. It took ten minutes of an exchange of fire before the NPA squad succeeded in subduing the PNP unit before cautiously approaching the PNP mobile vehicle to seize two M16 rifles and two 9mm glock pistols. At 7:25 am, the NPA 14-man squad safely withdrew from the ambush site.

Shamefaced by the aftermath of the successful NPA ambush against its troops, the PNP hierarchy peddled the dubious line and outrageously melodramatic declaration that the PNP unit was a “non-tactical police team” overwhelmed by a superfluous NPA force which seized all six of its total firearms. It is a vain attempt to cover-up the fact that an armed PNP unit on offensive operation was effectively neutralized by a 14-man NPA unit. Seizing the initiative as a matter of principle of guerrilla warfare, the NPA unit was able to induce the enemy into a well-laid ambush and attack the enemy’s weak force by the NPA’s relative superior force. In subduing the PNP unit, the NPA aims to win a battle of quick decision by demobilizing its moving targets and wiping out the enemy swiftly.

In the wake of the Bansalan ambush, the Army’s 73rd IB, PNP Regional Public Safety Battalion, PNP Special Action Force and the 39th IB are now again scouring the countryside. Along with the PNP, these are the same forces that have no qualms whatsoever about their daily bloodbath, victimizing civilians and unarmed suspects alike, under the auspices of Oplan Tokhang and the GRP’s all-out war. The PNP troops in Bansalan are in the thick of the GRP’s counterinsurgency campaign, actively surveilling revolutionary organizations and personalities, harassing unarmed Lumad and peasants and contributing greatly in intelligence to target Red fighters and NPA units.

Mandated to defend the masses as its true army and in strict adherence to the tenets and protocols of war, the NPA will continue to exact revolutionary justice and wage tactical offensives anywhere and anytime in the countryside and areas under the People’s Democratic Government. Tempered in the long running guerrilla warfare in the country, the Red fighters will continue to deliver heavy blows against the enemy, seize arms to increase the number of its full-fighting units and advance the level of people’s war.