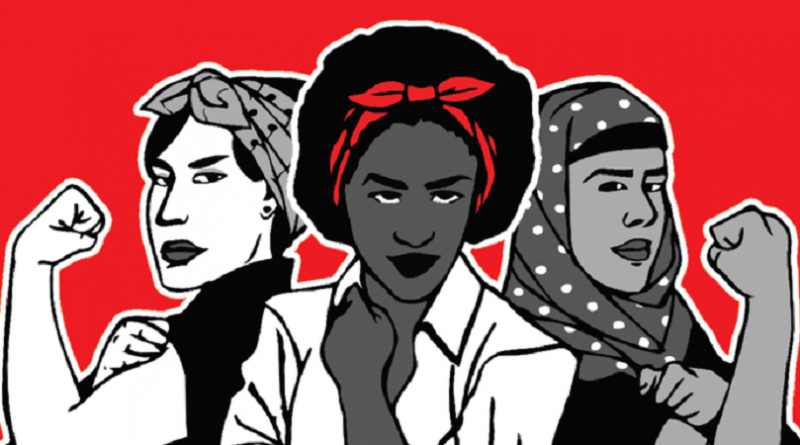 Introduction to the theme of tue Red Forum hold on 8th of March in Trondheim.

The main theme today is women’s struggle and the struggle against imperialism. We say that the Norwegian state and capital is enemy of the women in the world, and I am going to tell you a little about it now. I hope that people will ask questions after this introduction, and contribute with comments – and say their opinion about the topic, and what we might do about it.

The 3 biggest Norwegian compaies are: Statoil, Telenor and Norwegian Hydro.

On the top-ten list we also find Norgesgruppen (The Norwegian Group) and Reitangruppen (The Reitan Group), which owns almost all stores and kiosks, which is not in the ownership of Coop, and the bank DNB (The Norwegian Bank). Many of these companies have large and profitable businesses in the third world.

What is the third world? Mao is among those that divided the world into three. He and we consider most parts of Asia, Afrika and Latin-America as the third world. These are countries and nations which are oppressed – countries which are held down as poor, while at the same time they are the most populated, have most of the workers, does the most of the work in the world and have the most resources.

Norway’s biggest company is Statoil, and the Norwegian government holds the main ownership, with 67% of the stocks. The company is active in 36 countries and is among the world’s 50 biggest companies (!).

Statoil’s primary income is from oil- and gas production on Norwegian socket, but NRK writes: «The engagement of Statoil in Angola is the company’s biggest abroad. Statoil pays more in taxes to Angola than Norway gives in aid to the whole African continent combined.

The poverty and the difference between rich and poor is grotesque in Angola. Half of all Angolese live below 2 dollars a day, and are malnourished. Life expectancy is 52 years. At the same time, a cold coke costs 10 dollars in the rich areas of the capital. Statoil profits also benefits the rich Bureaucrats and capitalists of Angola.

How much has Statoil profitted from exploiting Angola? Scientists and journalists have tried to find out, but they are not able to. Statoil keeps this a secret. But one finds that they gave money and oil, worth 23 billion kroners in taxes to the government in Angola, in 2014…

They are also revealed to have paid 420 millioner kroners to a mystical research centre which only exists on paper – a hide-out for corruption.

Most women in Angola work within farming. The oil wealth should have improved their lives. It could have been used to develop Angola’s own industry and modernize the country’s agriculture. The imperialists and bureaucrats have their hands full of wealth from Angola’s soil – whilst the proletarian women and empoverished farmers toil their hand to blood on the outdated tools.

Telenor is also active in the third world. The state owns over half of Telenor as well. And Telenor has also been involved in scandals. For instance in 2008, when Norwegian media revealed extensive child labour among Telenor’s sub-contractors in Bangladesh.

Children under the age of 14 and people who weld without safety equipment, have delivered the cheap commodities which are used by Telenor to gain super-profits in Sout-East Asia. The media only cover the tip of the iceberg. And they do so only when the topic of child labour and corruption are mentioned – the ordinary explotation of women in the third world, doesn’t create big headlines.

Norwegian Hydro has operations in 50 countries. The state owns 43% of all of its stocks, and the company runs mining businesses, produces aliminum, produces electricity and a number of other products.

In 2012 Vale was designated by Greenpeace as the company in the world which has «the most contempt for environment and human rights».

To sum it all up

These are some of the examples of Norwegian exploitation of the third world. Big Norwegian companies downright rob the world’s poor of their resources. Sweet-talking bureaucrats and corrupt capitalists – makes Norwegian capital – both private and governmental – able to grow fatter at the cost of the environment and humans in the world’s empoverished countries.

To say it briefly, the Norwegian government and capital is an integrated part of the imperialist world-system, which plunders the third world – and the empoverished women of the world are affected hardest of all.

Part 2: What is special with the way women are exploited and suppressed under imperialism?

Imperialism is a system. The examples remains just examples. They however show a pattern. The pattern is systematic oppression and exploitation of the third world – from the imperialistic governments and capitals. And the worst is not the deviations, the corruption or breach of ethical principles – the worst is how imperialism works at its core, the imperialists power over the third world and their plundering of soil, water and humans in the world’s most empoverished countries.

Imperialism does mainly two things to the third world: First of all: It organizes plunder of the third world. First and foremost by super-exploting the labour force of proletarians in the poorest countries. Secondly, by robbing raw materials and resources which are under-paid for. In both accounts it is about unequal exchange, that they buy labour and resources from the third world far beneath its value. Marxism shows that the imperialists rob super-profits from these countries – a bigger outcome than they would have gained by investing the same amount of capital in the imperialistic countries themselves.

Secondly: Imperialism suppresses the development in the third world and holds it down artificially, in semi-feudal and semi-colonial conditions. They are refused to develop an independent national production. Corrupt and reactionary politicians are being bought up as partners to imperialistic companies and states. Revolutionary leaders, socialists and nationalists are systematically being removed by coup and military power, before they are overthrown and murdered – or chased into exile. The economy is held down in old-fashioned farming, and the culture is held down in old feudal and suppressing structures. Missionaries who preaches hate against gay people, and who preaches womens oppression, have their businesses sponsored by billions from the West.

The countries in the third world are still partly feudal. Feudalism is a system of production before capitalism. It’s based upon agricultural production and direct explotation, instead of industry and indirect exploitation through wage-work.

Under-development is a prerequisite for super-explotation. The imperialists are dependent on holding the third world down in form of politically, economically and socially backwardness. This is the prerequisite to keep the price on labour-force down, to provide cheap proletarians to the imperialists and to crack down on all organizing which might threaten the profits.

At the same time, they cannot avoid contributing to some infrastructure, to urbanization and to what is to become their path – hundreds of million empoverished proletarians who only have their shackles to lose by driving the imperialists out of their countries.

It is women who pay the biggest price of super-exploitation and under-development. It is them who die in child-birth, from the lack of medicins or clean water. The reactionary regimes keep the women down. In the factories of the imperialists, it is women who does the least paid work. It is men who are vice-presidents and chairmans in the factories, where women are subordinated proletarians. The feudal patriarchy is a useful supporter in keeping proletarian women down.

Feudal patriarchy reigns within the extended families, violence against women is widespread and women are not only subordinated to imperialism, capitalism and semi-feudal power, they are also subordinated their father or their husband. In national and anti-colonial revolutions, women in the third world have won a number of rights, but these have suffered setbacks everywhere where imperialism have dealt a blow to the national-democratic revolutions – or where reactionaries and jihadists have brought them on to their dead end.

Women play no small part in the third world and the imperialistic production – and in the division of labour. They bear the main burden in the families, and carry the main responsibility of reproducing the labour-force and raising the children. They carry out the unpaid or most poorly paid work in most parts of society. They are the reserve working-force for a number of industries, and they make up for a big part of the working stock in a number of industries which indirectly produce for Western markeds – like agricultural products, clothes and electronics.

Women are in addition victims of wealthy sex-tourists, women are sold as sex-slaves to prostitution and stripping, and marriages are being arranged between poor women in the third world and wealthy men from imperialistic countries.

My opinion is that we may sum up five important contitions which is the reasons for why women in the third world are effected especially by imperialism, in addition to exploitation and oppression by the whole proletariat and people of these countries: Semi-feudal modes of production in the countryside, where women have spesific tasks. The patriarchal family, where men have all power and where women are taking care of home and children. The semi-feudal culture, which treats women as second best. Extra low wages and working conditions for women, in the capitalistic production. Sexualized explotation, buying and selling bodies, sex-industry and trafficking.

Marxism states that the origin of private property, the family and the state, also included the historical subordination of the woman under the man. The creation of class societies led directly to the making of patriarchy.

Capitalism has not abolished patriarchy. It has woven the capitalistic and imperialistic production, culture and politics thightly together with patriarchy. These cannot be separated today.

Communism is the only alternative to this system. Communism is based upon collective ownership of resources and production. It is a classless society and will abolish the state as a organizer of classes. And it is a collectivistic society which does not leave the burdens of reproduction, child-rearing and people’s health to individuals and families. To say it briefly, it is a society that may remove all that which patriarchy is dependent upon.

Communism can only be established through people’s wars. In the third world, the first step is national-democratic revolutions, where the people throw out imperialism and crush the remnants of feudalism. Women in all countries, first and foremost proleterian women, must be a part of the hard nucleus in the revolutionary forces. This is the way it has been in previous revolutions – the socialist October revolution in Russia, which happened a 100 years ago this year, begun with the demonstrations and struggle of working-class women.

People’s war and revolution are not tea-parties. It is not easy, a quick affair or even funny. It is hard work, protracted, hard and dangerous. Revolutions are met with bloody oppression, and requires militant struggle, discipline and authority from the revolutionaries. The hardest struggle in the world is carried out by women in the third world, they carry the heaviest burdens in the revolutionary struggles as well – it is therefore our duty to stand in solidarity with them not just in words, but also in deed.