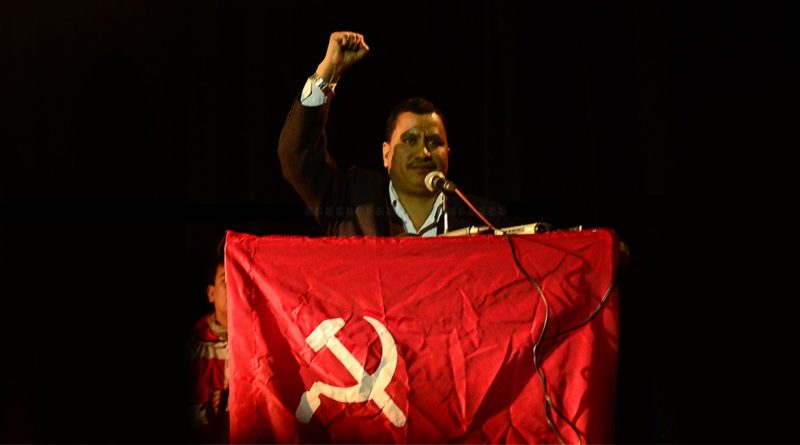 The police arrested one Dev Kumar Limbu of the Netra Bikram Chand (Biplav) led CPN from Panmara, Dharan-6 with an M 16 rifle and a light machine gun (LMG) on Wednesday. The LMG’s stand and two sets of magazines, and a magazine of M 16 were also seized from the member of party’s Koshi bureau and in-charge of Morang and Dhankuta districts.

M 16 is an American rifle while the LMG was made in India. The LMGs are used by both the NA and Armed Police Force (APF) in Nepal but the M 16s are used exclusively by the NA.

The Nepal Police headquarters has sent a team led by DSP from its intelligence bureau to investigate the activities of Chand led Maoists in the northern parts of Morang. The team is working in coordination with the NA and local police units.

“NA shows interest even when a home-made pistol is recovered nowadays. It is natural for the NA to show interest when weapons that they use have been recovered,” the police source added.

The NA had claimed back then that the UNMIN list was not correct and the Maoists hid many weapons. It had pointed that the Maoists had looted 3,430 units of weapons from the NA, APF and police. The Maoists were suspected to have many more sophisticated weapons of their own.

Where have the weapons gone?

The then Maoist Chairman Pushpa Kamal Dahal had once commented that some of the weapons were swept away by the river.

The Nepal Police headquarters believe the Chand led Maoists are trying to wage the war from northern Morang like the Dahal led Maoists had done from Rolpa. Nepal Police Spokesperson SSP Uttam Raj Subedi said the Maoists have stored the weapons at the jungle in Kerabari, Morang. “Storing and transport of the weapons and explosions in recent times show the Maoists are preparing for the war,” SSP Subedi stated.

The security agencies say the Maoists are focusing in the northern parts of Morang due to the forests in Kerabari, Letang, Jante, Jefale and Singhadevi area that have minimal presence of security agencies.

Letang and Sinhadevi are connected with six-number Budhabare of Panchthar and Raja-Rani area of Dhankuta district. These areas were considered as a safe haven of Maoists even during the insurgency.

The police arrested Jitendra Mahara, who led the Chand’s Maoists in northern area of Morang, on February 23 after intensifying activities in the area. Mahara, a resident of Jante, was accused of explosion at the contact office of Indian Embassy in Biratnagar.

Narendra, son of the party’s spokesperson Khadga Bahadur Bishwokarma was also recently arrested from Morang with three rounds of bullets but the court has already released him on bail.

A total of 374 cadres of Chand led Maoists have been arrested in the 11 months of the current Nepali calendar year. Seventeen of them have been released while the rest of them are in jail with most of them jailed for extortion.

Police Spokesperson SSP Subedi said the Chand led Maoists are on an extortion drive more aggressive than the Maoists during the insurgency period.

The police have not been able to make arrests in the incidents of arson and explosions though. One have been arrested for the bombing in front of Nakkhu, Lalitpur recently and another for the arson on Ncell tower in Chuhine forest in Dhakari rural municipality 3 of Achham on February 23.

The Chand led Maoists have been targeting big projects with foreign investment. The party has already threatened to shut down the Arun III and Upper Karnali hydropower projects. Ncell has also borne the brunt of Chand’s party.

“The Dahal led Maoists seemed to make efforts to do some positive works at the start of war. But the activities of Chand led Maoists are very aggressive. Their activities targeting big projects with foreign investment are aggressive,” Police Spokesperson SSP Subedi stated.