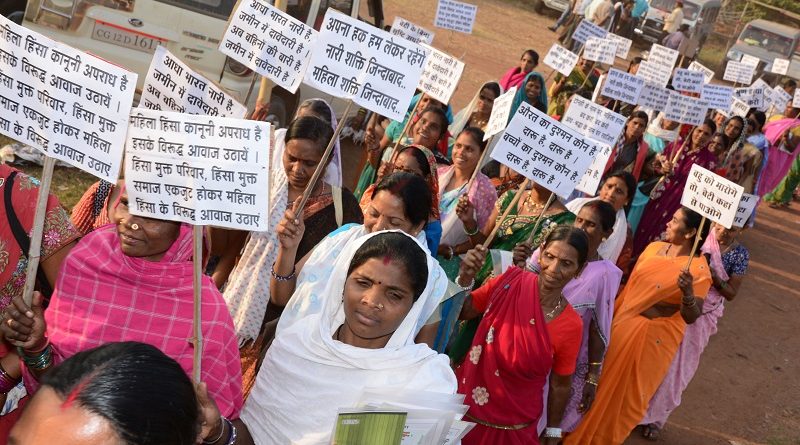 Bastar Solidarity Network, Mumbai organised the book release of “Bearing Witness:Sexual Violence in South Chhatisgarh” on 10th March 2017. The book has been brought out by Women against Sexual violence and State repression (WSS).

Dr. Ilina Sen, academician and activist released the book. While releasing the book she said that it would be naive to examine cases of violence in South Chhatisgarh independent of the resource presence there. Mineral deposits in the state, in most cases, intersect with traditional settlements of adivasis, and therefore places their eviction by the state, as an inevitable. The adivasis, in most of these cases, have displayed enormous courage, resisting the corporations, the governments and the vigilante groups. Hence the unforeseen and totally unjust presence and multiplication of violence. We have some of the richest corporations of the world—international as well as national—allying with the governments to annihilate the people and their ways of life. There are multiple forms of resistance that includes cultural forms as well, through which the people speak for themselves. The alliance between the corporations and the state and central governments is now quite obvious, and the onus is on all of us to critique, resist and extend solidarities towards the people.

Pushpa Rokde, who works with the Dainik Prakhar Samachar in Chhatisgarh is the only adivasi woman journalist from Bastar. She was one of the firsts to report the cases of rapes and atrocities by security forces in Bijapur in 2015. She spoke about the challenges of being an adivasi and a journalist. She spoke about how the state and the police view her as being pro maoist or going to meet maoists whenever she goes in the interior areas of Chhatisgarh to cover stories. She mentioned how the situation has deteriorated due to increasing numbers of fake encounters. Because of this fear, she said that men were afraid of taking ailing women to hospitals for fear of being killed midway. She said that Adivasis are truthful and have called encounters fake only when innocent people were killed. She said that the state has intimidated those journalists who have chosen to speak the truth.

Shreya K, a WSS activist, placed sexual violence within the larger history of violence of all forms in Chhattisgarh, which peaked between 2005 and 2009 where the Salwa Judum was in active operation. She asserted the presence of a pattern in terms of specific acts—unwanted touch on various body parts and especially sexual organs, pilfering of chickens, taking away money and so on—in areas filled with security forces. The incoming of forces has been continuing in newer forms post the Supreme Court banishment of the Salwa Judum, therefore contributing towards the manifold increase in multifarious instances of violence and sexual assault in particular. It has to be noted, she said, that one could derive identical patterns if one were to examine three factors in the state—the flow of government forces, constancy of violence and the presence of natural resources eyed by mining corporations. We’ve always been able to read the presence of sexual violence into incidents of warfare—where the inequality of power across spectrums are maximum, making justice an almost impossible end. Instances of sexual violence are seldom reported (due to the insistence of taboos), and if reported, the due process is seldom begun. Shreya spoke poignantly about the emotional and physical pain many victims she’d met had suffered, and one of the most important acts we could do, she said, is to bear witness, and hence the launch of the book.

Adv. Yug Mohit Choudhary, human rights lawyer, underlined the vulnerabilities to which people working in the state of Chhattisgarh— lawyers, journalists, academicians—are exposed, certainly caused by the absence of the rule of law. The instances of injustice and violence seems to be ever present in the state—and bearing witness to these events of urgency is a duty we all are responsible to. He examined an event that occurred in a village called Sarkeguda, in Chhattisgarh, in particular—where 17 villagers were killed by CRPF forces on 28 June 2012. The case, after analyses reveals stark violation of Standard Operating Procedures (SOP’s)—wherein there are evidences of gunshots at the back, head injuries, bodies shot when they were kneeling and incise wounds—which clearly indicate possible torture and fictitious encounters. The case is still undergoing a Judicial Commission Enquiry, awaiting justice, he said. He ended by highlighting that there is consistent lying from the side of the state, and this denial of truth seems to be the status quo. We should, he said, together think of strategies as a collective—to give and bear witness.

The three speakers were followed by the presentation of a few video documents from the state—recorded in 2016—recording state violence against the adivasis in Chhattisgarh, collected by Women Against Sexual Violence and Repression (WSS).

A photo exhibition on Bastar by renowned photographer Javed Iqbal was exhibited on the occasion. This was followed by a question-answer session with the speakers, and the session ended with a few cultural programme.