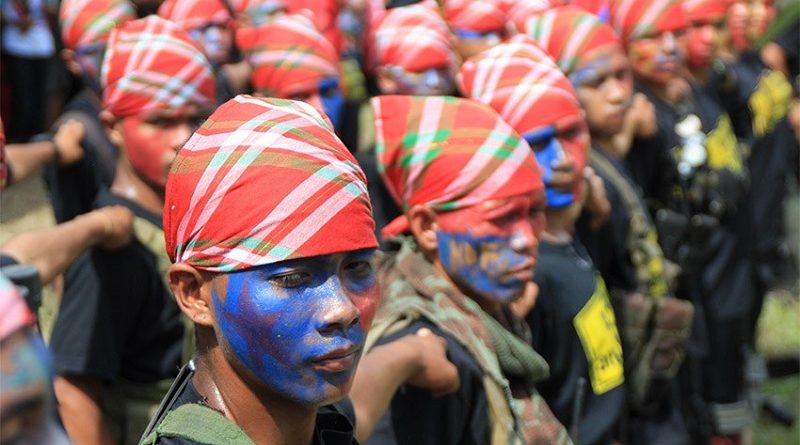 The New People’s Army (NPA) welcomes and supports the March 12 Joint Statement issued by the GRP and NDFP negotiating panels declaring a continuation of peace negotiations.

The National Operations Command (NOC) awaits instructions from the central leadership of the Communist Party of the Philippines (CPP) on the matter of the reinstatement of the unilateral ceasefire declarations.

Until then, the NPA is ready to confront and counter the offensives of the Armed Forces of the Philippines (AFP) in order to defend the people, especially the peasant masses and minority groups, from the abuses being perpeetrated by the AFP.

Since GRP President Duterte’s order last March 9 to “flatten the hills”, the AFP has become even more frenzied in its crazed war against the people.

Last Saturday, March 11, the AFP conducted aerial strikes against Barangay Cabuyuan in Mabini, Compostela Valley. It employed at least three MG-520 helicopter gunships to drop no less than 10 bombs, even as ground troops fired their machineguns. At least 75 families (200 individuals) were forced to evacuate.

For two days now, the AFP has conducted aerial bombing runs in Barangays Gawang, Tee and Andavit in Datu Salibo, Maguindanao, using FA-50 jetfighters and MG-520 helicopter gunships. At least 3,000 families in Maguindanao have been forced to evacuate their homes to escape the bombings and militarization of their communities.

Since February, the AFP has been conducting aerial bombings against peasant communities including those in Laak, Compostela Valley; in Bansalan, Davao del Sur; in Asuncion, Davao del Norte; in Fatima, Davao City; in Alabel, Sarangani and elsewhere. Thousands have been forced to evacuate as a result. The AFP has also threatened to conduct aerial bombing in Assipulo, Ifugao and Maddela, Quirino forcing hundreds of families to evacuate.

Over the past few weeks, no less than fifteen peasants have been killed by AFP troops and other state agents in Antipolo, Rizal; San Andres, Quezon; Maayon,Capiz; in Compostela and Maragusan in Compostela Vally; Arakan, North Cotabato; in Davao City and other places.

Peasant Ian Borres suffered 34 gunshot wounds in an operation conducted by the 61st IB in their village in Maayon, Capiz last February 24. On March 2, armed state agents killed anti-mining peasant activists Leonela and Ramon Pesadilla in their home in Compostela.

Last March 9, AFP soldiers rounded up 200 residents from Barangay Caylaway, Nasugbu, Batangas and forcibly brought them to Sitio Balagbag, Elementary School where they were subjected to interrogations by AFP troops.

These abuses by AFP soldiers are the reasons why the people continue to join and support the New People’s Army. As such, it is the obligation of the NPA to counter the AFP’s frenzied war against the people.

The NPA calls on the AFP commander-in-chief Duterte to restrain the AFP and command it to stop its acts of state terrorism against the people in order to prepare the ground for a meaningful ceasefire in line with the continuation of peace talks.