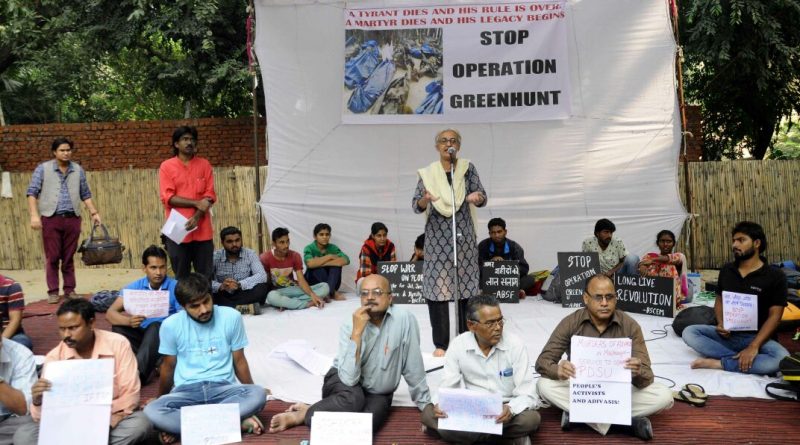 Condemning this brutal massacre conducted by the paramilitary forces, hundreds of intellectuals, cultural activists, democratic rights activists and individuals came together to register their protest on 2nd November at 11 am at Jantar Mantar.

The protest meeting was conducted by Sourabh, a democratic rights activist in Delhi. D. Raja, Rajya Sabha MP from CPI, strongly opposed this assault on the people fighting for their right to land and life and reminded us that this is an attack not just against one political party but against any voice that dares to stand up against the fascist regime at the centre.

He noted that any individual or organization that stands at the forefront of people’s resistance and raises their voice is brutally attacked by state forces. In these times, he found that we need to build a larger unity against fascism as every space for democratic dissent is under attack.

The evidence of such a brutal massacre marks a pre planned operation meant to destroy and crush adivasi assertions across the country.

He found that since our so called political independence, this is the largest such ‘encounter’ conducted by the state.

In such a time, it becomes crucial to remember that this area and the people resisting the state were fighting against the acquisition of land for Bauxite mining worth lakhs of crores to the Central and state government. Aparna, CPIML (New Democracy), reiterated the brutality of the attack where bodies appeared to have been mutilated and posed as encounters.

These encounters, she found, have been staged and these people were brutally killed in cold blood.

She demanded that those who are in police custody be produced in a court of law and treated as political prisoners. Rakesh Ranjan, professor in SRCC in Delhi University, reminded us of the history of attacks against the adivasi, dalit and poor peasants in this country.

Earlier the policy of Operation Green Hunt was executed across Central India and the citizens of this country were attacked by its own paramilitary.

He found that now the brutality of the paramilitary forces is visible on the bodies of the dead and reflects the policy of the state renamed ‘Mission 2016’.

Mrigank from CPIML (New Democracy) stressed the need to unite at such a time and fight this fascist assault of the state on the people of this country. Girija from CPIML (Liberation) hailed the long history of people’s struggles, from Naxalbari to the fight against brahmanical-fascism today and the need to fight unitedly. Pankaj Tyagi, advocate from Haryana, asserted that this is not just a fight for individuals.

He found that those who were killed fought for their right to jal-jangal-jameen and this is an attack on an ideology and those upholding their rights. He found that those sitting in the boardrooms of democracy were the true terrorists as they orchestrate and execute such brutalities in the name of ‘national interest’.

The killing of 8 members of SIMI in Bhopal, the attack on the people of Kashmir, the repeated violence on dalits across the country and now this massacre in Malkangiri, all these are related and need to be fought together.

Saroj Giri, professor of Political Science in Delhi University, reminded us that the form of violence changes over time and the only way to fight it is by sharpening our struggle.

All India Students Federation and several such democratic voices spoke in solidarity condemning this fake encounter and raised their voice in unison to fight fascism in order to build a truly democratic society.

On the 24th of October 2016, in the district of Malkangiri in Odisha, adivasis, cadres and leaders of CPI (Maoist) were massacred by security agencies in an unprecedented covert operation. So far in this brutal massacre, about 39 people were killed according to the leaders of adivasi organisations in the region.

The brutality and the secrecy of this joint operation of the police forces of Odisha, Andhra Pradesh and Central government’s paramilitary forces reveal that it was a well planned cold blooded massacre.

The police announced that 15 people were killed.

But over the next few days it became clear that many more had been brutally killed by the paramilitary forces in a combing operation.

The bodies of those killed revealed brutal marks of torture, heads were cut off, women’s breasts were chopped off and most of the bodies were mutilated to the point where they were unidentifiable.

The names announced by the police did not match the bodies that could be recognized and on the 30th of October, the police buried the remaining bodies by saying that no one came to claim the bodies.

Among the dead, women outnumbered the men. Moreover, the police took 10 adivasis and RK, CPI (Maoist) Central Committee leader, into police custody and have not produced them in court.

All the participants in the protest demonstration united agreed to raising the following demands:

1. Order Judicial Enquiry into Malkangiri Massacre by a Supreme Court judge to establish the facts
2. Akkiraju Haragopal (Ramakrishna, RK) and 10 others under the custody of Andhra Pradesh government should be immediately produced in a court of law
3. Stop Devastating Adivasi Villages in the name of Combing Operations and stop harassment of adivasis
4. All those responsible for this massacre, including police and paramilitary personnel, should be charged with murder.

Here is the commentary of a comrade, who participated to the protest :

“Today New Delhi witnessed one of it’s most vociferous and militant protests challenging state oppression ever in it’ s history.

It gave the vibrations of a huge red torch of resistance .illuminating .Speakers and activists represented a huge range of section sand organizations.

It was heartening to see so many trends from the Marxist-Leninist camp participating be it the Maoist,Liberation,C.L.I or New Democracy trend.

Speakers stressed on resurrecting the spirit of the Naxalbari armed struggle launched 50 years ago and none termed the Maoist movement as ‘terrorist.’

In earlier times many participating sections termed the Maoist movement as ‘path of terrorism or anarchism’.

This was a healthy change.

In no protest before was such united rage expressed like thunder and lightning appearing.

It was impressive to also see participation of intellectuals who explained how oppression lay in the base of the socio-political and economic state of the country.

Overall over 100 people participated.I received a most encouraging report from comrade Saurabh who described it as one of the most memorable protests ever.

It is a lesson for comrades to organize mass protests irrespective of political differences.

Significant that even a leader of the Communist Party of India expressed dissent.

It proved how broad the united democratic front could be.

No doubt very progressive political orientation was expressed in the protest today.”