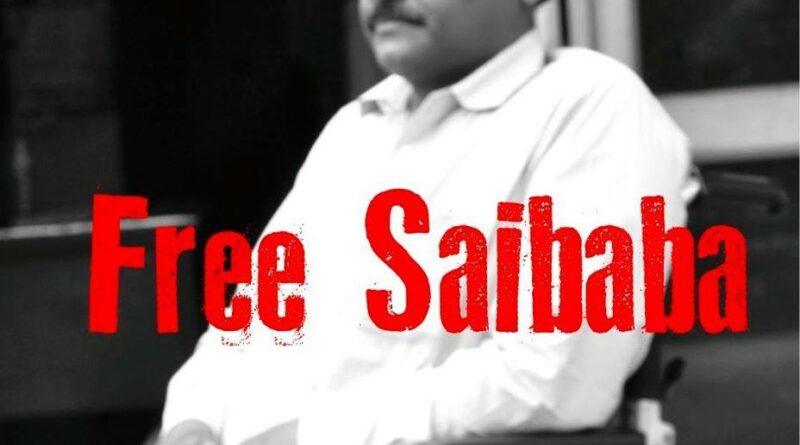 New Delhi: Professor G.N. Saibaba, who is serving a life term in the Nagpur Central Prison for alleged links with the CPI (Maoist), has decided to go on a hunger strike from October 21 as he has not been provided with clothes, medicines and books for a month.

According to a Hindu report, Saibaba’s wife A.S. Vasantha Kumari has said he has been denied access to reading material, medicines and clothes. “Saibaba who is lodged in jail since 2014 has been denied all basic human rights where he is not given any letters or allowed any phone calls from me since over a month,” she said.

Kumari has sent letters about “the hardships and harassment Saibaba faces in jail” and the “unfair restrictions” imposed on him to the Maharashtra additional director general of prisons Sunil Ramanand and the superintendent of prisons (Nagpur) Anupkumar Kumre.

“Sometimes all the medicines given by his advocates are not being given to him. He has multiple health problems and needs to take prescribed medicines every day to save his life,” Kumari told The Telegraph.

Advocate Aakash Sarode, who regularly delivers medicines, clothes to Saibaba, said that last month he had delivered a shirt, under garments, medicines, four books and two notepads for him. “However none of it was taken by the prison authorities, without giving any reason for the same. I went back again two weeks back but they refused to take anything I got. I will try going once again before October 21,” Sarode said.

Kumre, however, denied the “baseless allegations” according to The Hindu‘s report and confirmed that Saibaba was going on hunger strike from October 21. “Due to coronavirus we have stopped taking newspapers in jail since March but other than that books and letters are given to him after we go through them and decide on what is ‘right’ and needs to be given to him,” he said.

Clarifying what was considered “right”, Kumre said, “the administration (which includes the SP, Additional SP and another prison official) verifies the books and sees if they are “nice”,” and added that books on Gandhi, freedom fighters or mythology were usually allowed. “A magazine or any other reading matter has to be ‘correct’ for the inmate. As far as clothes are concerned, due to coronavirus we have stopped allowing any civil clothes inside the jail as it spreads the virus,” he said.

ADG (Prisons) Sunil Ramanand said that “the DIG is going to Nagpur jail tomorrow to ascertain the situation.”

In March 2017, a sessions court in Maharashtra’s Gadchiroli district convicted Saibaba and four others, including a journalist and a Jawaharlal Nehru University student, for Maoist links and engaging in activities amounting to “waging war against the country”.

The court held Saibaba and others guilty under the stringent Unlawful Activities Prevention Act.

The ailing activist had recently filed a plea seeking bail on medical grounds as well as to meet his mother, who was suffering from cancer, in Hyderabad. The bail was denied by the Bombay high court four days before his mother passed away.