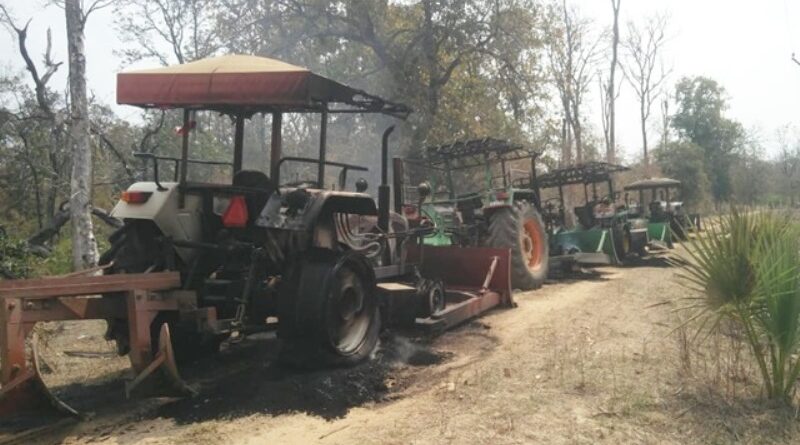 Kothagudem: Cadres of the CPI (Maoist), who have been increasing their active presence in Telangana State, set fire to construction machinery in Bhadradri Kothagudem district.

The incident took place in the wee hours of Wednesday between Bathinapalli-Tippapuram villages, on Chhattisgarh borders, where road works were going on under Central Road Connectivity Project meant for development of Left-Wing Extremism (LWE) areas.

According to police, the Maoists doused a bull-dozer and a road roller with petrol and set them on fire before disappearing from the scene. A team of around 10 members was said to have taken part in the action.

The Cherla Inspector of Police T Satyanarayana informed the press that a case has been booked, and police teams were conducting combing operations for the Naxal team that vandalized the machinery.

The Maoists left behind pamphlets in the name of the CPI (Maoist) Bhadradri Kothagudem-East Godavari Committee in Venkatapuram mandal of Mulugu district.

Burning down the machinery at Cherla was the first incident after the movement of Naxal action teams were reported in Manugur forests recently in the district.

Incidentally, it was in July 2019 that an ex-MPTC N Srinivas Rao, of Peddamidisileru in Cherla was abducted and killed by the Maoists. It was said to be the first incident after Telangana formation wherein a ruling party leader was eliminated by the Naxals.