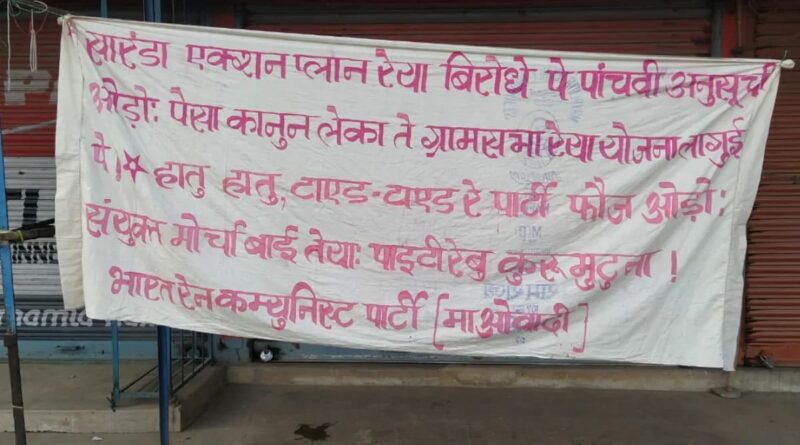 The CPI (Maoist) launched a poster-campaign against the administration at Chaibasa marketplace and township in West Singhbhum district on the intervening night of Tuesday and Wednesday.

Three banners, along with several posters denouncing the government’s measure to eliminate Naxalism from the tribal-dominated district were put up a day after Ajay Lynda joined as the new district superintendent of police.

The posters and banners in Ho, written in Hindi script, were found at the Chaibasa bus-stand,  Birsa Munda Stadium and at Mangla Haat market, all under Sadar thana area in Chaibasa.

The posters demand, among other things, the withdrawal of the Saranda Action Plan. They also call upon the young people to join the outfit in large numbers to work for the uplifting of tribals and fight against the administration.

A team of police officials from the Sadar thana have seized the banners and posters and initiated a probe.

“Having seized the posters and banners, we have started an investigation to know whether the poster-campaign was carried out by the outlawed Naxal outfit, or by any criminal elements.  We are talking to people near whose shops or business establishments the posters and banners were found.  We are also scanning the footage of CCTV cameras,” SP Ajay Lynda told The Telegraph Online.

“As I joined on Tuesday, I declared that the police will launch a more aggressive fight against Naxals and will see to it that Naxalism is wiped out from the district, including Saranda. Not only did the Naxals throw a challenge to the police and administration, but also tried to show that they are very much present in the district headquarters,” the officer said.