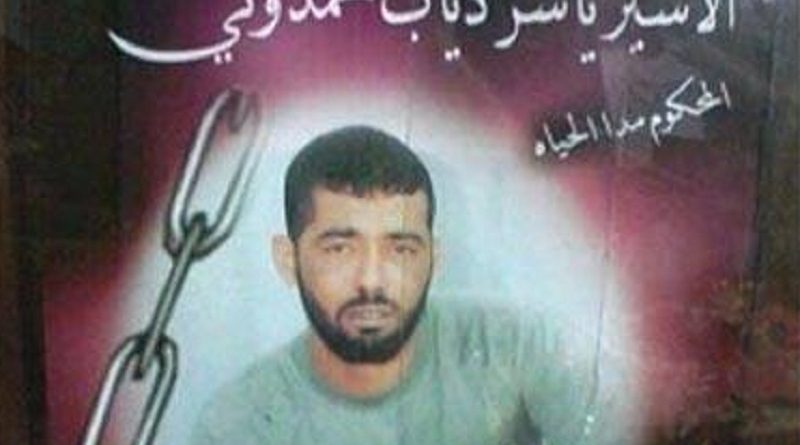 The Democratic Front announces the martyrdom of captive Hamdouni, martyr of Israeli medical negligence, and calls on the international organizations to investigate the circumstances of his martyrdom

The Democratic Front for the Liberation of Palestine announces to our Palestinian people and the Arab and international public opinion the loss of fighter and prisoner in the occupation prisons, Comrade Yasser Diab Hamdouni, 40 years old, who died as a result of heart attack caused by Israeli medical negligence.

The Democratic Front holds responsible the Israeli occupier of his death caused by medical negligence. The martyr suffered from heart and breathing problems and underwent cardiac catheterization, but this treatment was not enough.

The Front calls on the International Red Cross, Red Crescent and human rights organizations to intervene and investigate in order to reveal the circumstances of the Hamdouni’s martyrdom, knowing that medical reports confirmed the need for their release because of his deteriorating health conditions.

And it calls on the Palestinian leadership to internationalize the cause of the prisoners in Israeli jails, through the provision of draft resolutions to the UN Security Council and Human Rights Council. And to file formal complaints before the International Criminal Court, including the demand for release of sick prisoners, especially after the number of martyrs detained in Israeli prisons increased to 209 due to intentional medical negligence and the poor conditions to which they are subjected in these jails.

It also calls for organizing protests in concentration places of our people in the occupied West Bank and Gaza, in the asylum countries and the diaspora, in solidarity with the brave prisoners and their heroic steadfastness against prison administrations and their unjust practices.

At the time when the DFLP bids farewell to martyr Hamdouni, also addresses a greeting to prisoner hero Malek Al-Qadi who won his freedom by his brilliant resistance.

The martyr Hamdouni, who spent 14 years in prison and was sentenced to life imprisonment for “resisting the occupation” and to belong to the DFLP, is from the Yaabod town, Jenin district, in the West Bank.