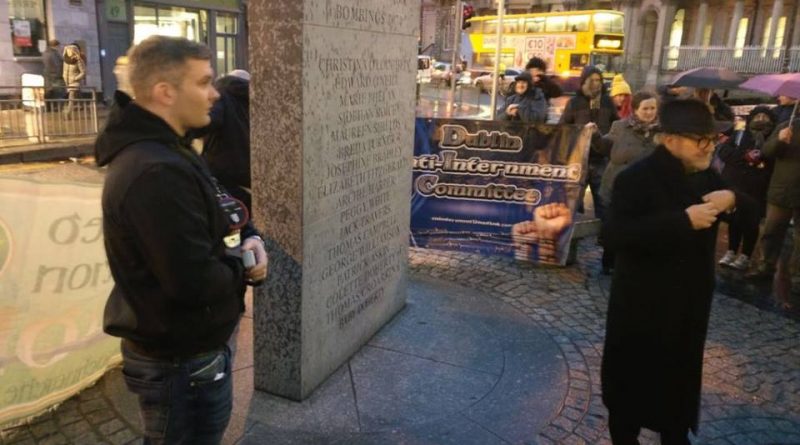 Up to 100 people took part in the Bloody Sundays – From Derry to Yemen March and Rally in Dublin this evening.

The event, organised by Anti Imperialist Action Ireland highlighted ongoing Imperialist war crimes in Ireland and around the world and was attended by a broad range of progressive forces including Irish Socialist Republicans, The Independent Workers Union, Saoradh, The Irish Republican Socialist Party, The 1916 Societies, the Anti Internment Group of Ireland and the Free Tony Taylor Dublin Committee as well as Independent Activists and other progressives.

The March and Rally began at 5pm at the Dublin and Monaghan Bombings Memorial and was presided over by Irish Socialist Republican, Padraig O Fearghail, who outlined the order of the evenings event before calling on internationally renowned broadcaster George Galloway to lay a wreath in memory of all those who lost their lives in the Dublin and Monaghan Bombings, a British War Crime in Ireland that remains unsolved. After a minutes silence, Padraig then Introduced Diarmuid Breatnach, who sang a rousing version of Woodie Guthrie’s Ludlow Massacre, a song that commemorates US Imperialist massacre of striking miners in 1914z.

The growing march, led by a wreath and Black Flags, then made its way along Talbot Street with chants of “From Ireland to Palestine- Occupation is a Crime” and “Donald Trump/Theresa May- How many kids did you kill today”. The demonstration received a lot of support from here passers by and cars and busses who beeped to show support. The marchers, some of who were carrying candles or light up boards made there way to the GPO where a further crowd had already gathered.

At the historic GPO, Padraig called on Marie Uí Mhaolain, a well known singer to lay a wreath on behalf of all those who had lost their lives as a result of Imperialist war crimes. This was followed by an inspiring oration by George Galloway about the injustice of the ongoing British Occupation of Ireland and the Imperialist interference and occupation of the Middle East. Galloway paid particular attention to the case of the detention of #AhedTamimi, who’s 17th Birthday occurs today by the Zionist Occupation of Palestine describing her as both a hero and a leader of the resistance!

Padraig reminded the crowed that imperialism continues its unwanted interference in Ireland today, highlighting in particular the crime of Internment before calling Pól Ó Scanaill from the Free Tony Taylor Dublin Committee who read a statement on behalf of Lorraine Taylor, wife of Derry Internee Tony Taylor.

Diarmuid Breatnach then lead those assembled in singing Happy Birthday to Ahed Tamimi, before brining proceedings to a close with the well known anti war song Waltzing Matilda.

Anti Imperialist Action Ireland would like to thank all those who attended tonight’s event, all our speakers and singers and all those who worked so hard over recent months to make this event a success. Tonight Dublin took a defiant stand against Imperialism on Ireland and around the world and we intend to continue to build on this in the immediate future!