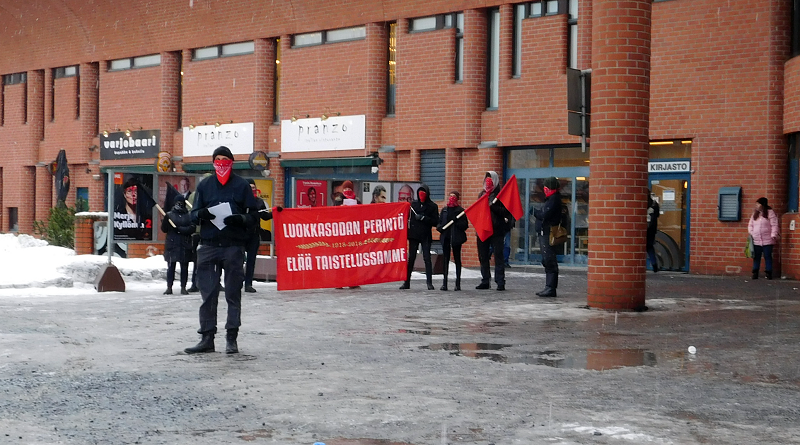 We made the declaration ”The heritage of the class war lives in our struggle” to be distributed on the hundreth anniversary weekend of the beginning of the workers’ revolution and class war of Finland. On Saturday we held a short unannounced rally, a lightning demonstration. Upon our arrival, we shouted together ”we won’t forgive, we won’t forget – a hundred years too much, don’t await” and ”proletarian solidarity, continuing struggle, revolution”. From the midst of a line formed by our banner and flags, communicating struggle unity, one comrade held a speech while other comrades handed out the declaration to people.

Shunned lessons of the class war and of the relation of its outcome to this day were presented in the speech and the declaration, with encouragement to organize into antifascist and revolutionary class struggle. Fittingly, the propaganda plates of the presidential candidates standing on a frame behind us had been painted with eight letters forming a call to ”struggle”. After the speech and the distribution of the declaration, we repeated our shouts and ended the demonstration. We thank for the attention, comments and questions from those who happened to be present.

We carried out the lightning demonstration with the Communist Youth of Tampere and the Red Flag Collective, the undersigned of our declaration. We received support and encouragement also from antifascists not belonging to the undersigned organizations. We will develop our cooperation and mass work also in the future. Boosted by the jubilee of the class war, we will perseverely strive to expand our working capability to all neighbourhoods inhabitated by the working class, but for that we need more local contact persons. If you’re interested in joining us or working with us in for example street propaganda and sports, contact us via email or come for a talk if you for example happen to be at the scene of our next lightning demonstration!