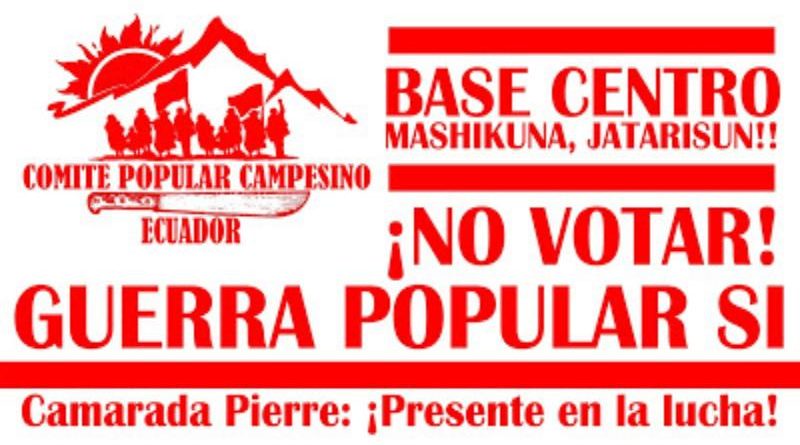 The big electoral circus has finished. The winner was “YES” with 64% of votes. Results that reaffirm the thesis that we have been handling, the process of weakening positions of the bureaucratic bourgeoisie is evident. Even worse, the readjustment of the comprador bourgeoisie has been important in the face of a trend that has been predominant in bureaucratic capitalism since its origins, especially as it has been able to consolidate, within its structure of allies, an important group of sectors of the domesticated left, part of the leadership of the indigenous-peasant trade union movement, in hands of the big bourgeoisie and big landowners. 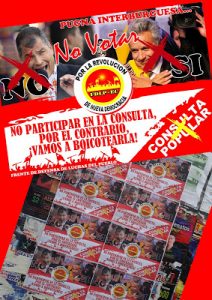 But the trend is not only evident in the polls, but in their economic disposition.

Typical of the comprador bourgeoisie (this doesn’t mean that the bureaucratic doesn’t walk along the same path) openly proposes the exemption of tariffs and taxes, downsize the state, reduce fiscal spending, concession of strategic sectors to private enterprise, free investment, trade agreements with the US, further strengthening of the Army and Police Forces, Yankee bases in national territory, and more…

With the triumph of the “YES”, the landowners are getting stronger, and not only those that support the ownership of large lands and the gamonalism, but that new breed of urban landowners who manage hundreds of urban properties for purely speculative purposes.

Once again, small and medium businesses are stabbed as they open, more aggressively, the doors to large enterprises, who import products that flood national markets and that cause the closure of hundreds of small and medium-sized businesses unable to compete with the large-scale production generated by imperialism.

The conditions become harder for the masses. The government, early in the year, returned to the line of indebtedness, more than 7 billion dollars, resources aimed at filling “fiscal holes” and whose payment will fall, in one way or another, on the masses through taxes, expensive services, etc…

The government’s difficulties in improving employment rates are dramatic.

On February 4 the referendum was held and on the 5th of the same month, the poor masses and the exploited workers woke up with the same feeling; that the referendum doesn’t represent anything that solves its most important problems.

Faithful to Marxism-Leninism-Maoism, to Gonzalo Thought and the need to prepare the conditions to unleash the People’s War in the country, the conscientious element of the class, the people and the poor peasantry organized around the People’s Struggle Defense Front of Ecuador, the Central Base and the North Base of the Popular Peasant Committee – elements of the Campaign named “COMRADE PIERRE” – called for a boycott of the referendum, and on that line some important actions were taken.

Flagging (hanging flags in public places), blocking roads, leafleting, posting posters and more, were the actions that were carry out under a single slogan: BOYCOTT THE REFERENDUM.

It’s also necessary to salute the leafleting in the city of Quito by the Red Guards, who from the Commune, called not to participate in the referendum because they consider it foreign to the interests of the masses and doesn’t contributes to the true democratic exercise of the people, without forgetting the harsh criticism and fight against the revisionism that has supported this process in order to strengthen the bureaucratic path, which is accurately the path of elections, referendums, assembly, etc…

The most important about these actions is that they should not be seen as a single event, but as an exercise in response to the old state and the building of the three instruments for the New Democracy Revolution under the fire of the class struggle and the unleashing of revolutionary violence.

HONOR AND GLORY TO COMRADE PIERRE! 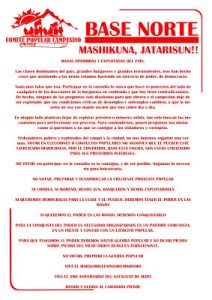 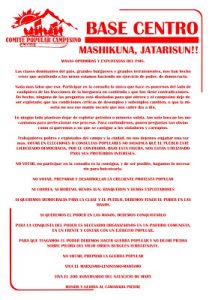 AT THE POLLS THE PEOPLE CHOOSE HIS MISERY. IN THE STRUGGLE, HIS LIBERATION!

STRENGTH THE ORGANIZATION AND THE STRUGGLE AGAINST THE HUNGER BUILDER, POPULIST AND SERVILE MORENO GOVERNMENT!

FIGHT AGAINST REVISIONISM, ALLY OF THE GREAT BOURGEOISIE, LANDOWNERS AND IMPERIALISTS!