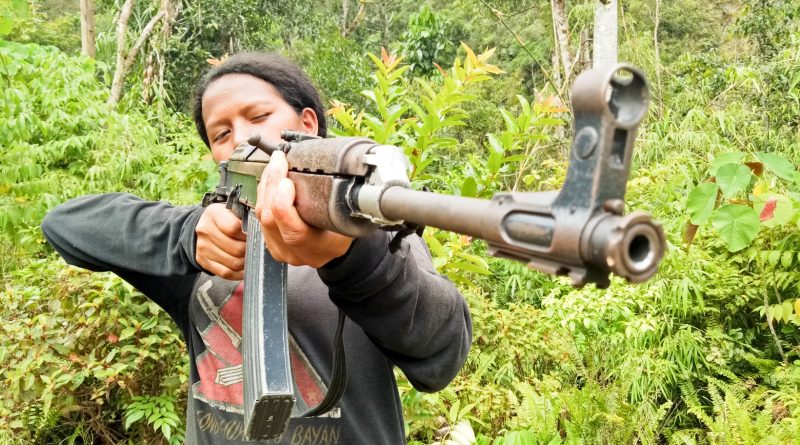 MAKIBAKA, the underground revolutionary organization of women, in Southern Mindanao condemns in the highest terms Rodrigo Duterte’s marching order for AFP soldiers to shoot women members of the NPA in the vagina since taking up arms renders their reproductive organs “useless.” In playing on the AFP’s fascist tradition of rape and male chauvinism, Duterte ignorantly assumes that he can rally his troops to commit the most heinous war crimes with impunity in his anti-people Oplan Kapayapaan.

We commend all women, organizations, civil libertarians, even women members of the AFP, who have taken offense at Duterte’s primitive and misogynistic views on human rights, especially of women, which stand on the wrong side of history and make a mockery of centuries of hard-won struggle by women not only in the country but around the world.

Malacañang can no longer sweep Duterte’s comments under the rug like it did in the past. Duterte’s recent order is yet another attack against all women, much like his promise to his fascist soldiers for the latter’s choice of bedding starlets as prize or immunity lest they rape women in their anti-terror rampage. It can never be downplayed “in context” like his detestable joke of wanting to be the first to rape an Australian religious missionary. His downright sexist treatment of women media practitioners will no longer be lumped up with his general distaste for the Philippine media who struggle to exercise freedom of speech against his tyrannical rule.

Duterte is a misogynistic tyrrant not only in words but in deed. Every single day, his newly-minted TRAIN Law beats down mothers of the working class who carry the burden of making ends meet in the face of rising prices of commodities and dwindling value of already barely livable wages. In farms, corporate plantations and haciendas nationwide, women alongside men work like slaves because Duterte favors foreign investments over the institution of genuine land reform. In factories and semi-processing plants in urban centers, women alongside men continue to be victimized by corporate greed with Duterte’s adamant neoliberal policies on job contractualization.

Like any dictator, Duterte detests women and wants them to kowtow to the patriarchal authorities of the semi-fuedal and semi-colonial society that condemn women as docile, unthinking secondary citizens. He wants women to never question, raise doubt or protest the inequalities that he himself is perpetrating against the masses of peasants, workers and Lumad. He demands subservience, and where there is none, he either unravels his dirty mouth to ridicule women or raises his iron-clad fist to stifle dissent, be it against the legal democratic movement or the underground movement.

But in truth, Duterte is deathly afraid of women, especially strong-willed women who see him for the mysogynistic tyrrant that he is. He is most afraid of women who choose the hard road of arm struggle against the exploitative reactionary government which he now desperately endeavors to keep together with fascism and dictatorship. He knows that when the masses rise up to topple him, more than half of those will be mothers, daughters and women of all sectors.
We likewise challenge presidential daughter and Davao City Mayor Sara Duterte, as a woman and a human being, to make a stand against her father’s egregious anti-women tirades. For the sake of the sector she belongs to and human rights in general, she must denounce this retrograde order that objectifies women and uses our reproductive organ as an instrument of subordination and derision.

MAKIBAKA calls on all women to wage all forms of resistance in the national democratic struggle to bring down the US-Duterte regime, the number one enemy of all Filipino women today. We call on more women to join the ranks of men and march with the New People’s Army which imbibes the long and heroic tradition of revolutionary women who fight against the roots of our patriarchal bondage—imperialism, feudalism and bureaucract capitalism.