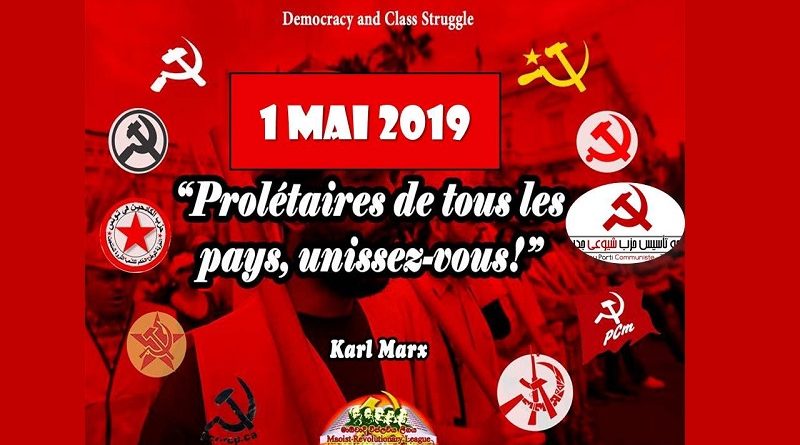 Proletarians and oppressed people of the world unite!

The imperialist system continues going through a deep crisis.

Current attempts imperialist and reactionary to deal with and overcome it are unsuccessful and it is going to deepen and extend.

The crisis, emerged in the field of finance, has its cause in production and today results in a new recession.

These new disputes start as trade war, and then are increasingly turning into political-military geo-strategic contradictions, resulting in and expanding in aggressive, occupied and proxy wars in countries oppressed by imperialism and also somewhat advancing the tendency to a new direct world war between imperialist for world repartition.

It means an increasing gap between the wealth of a handful of imperialist countries and the poverty of three-quarters of the humanity of in the countries oppressed by imperialism and, within each country, between the ruling classes and the proletarians, peasants and exploited masses.

Within the imperialist countries the tendency to fascism and open dictatorship advances.In countries oppressed by imperialism, where the ruling regimes have always been reactionary and subservient of the imperialist powers, illusions on national, popular and anti-imperialist governments are falling down and dictatorships with openly fascist and military character are advancing Imperialism is misery, reaction and war.

Development, wealth, democracy and peace, the safeguard of health and environment are increasingly proven to be incompatible with the rule of the imperialist system.

On the subjective level, the proletariat and its Marxist-Leninist-Maoist (MLM) organizations are still lagging behind in developing strategies, tactics and organizations and are not up to the challenges put by the objective situation both in the imperialist countries and in the countries oppressed by imperialism.

The ruling classes of the whole world are increasingly resorting to fascism, to impose their plans and their power and also to divert the growing discontent and resistance of the people’s masses.

The rebellions of the masses in the countries oppressed by imperialism are led by sectors still bound to one or another fraction of the big, petty or middle bourgeoisie, or even the feudal forces or to one or another imperialism and cannot find the way to a genuine revolutionary struggle for New Democracy and socialism.

In the imperialist countries, even if the people’s struggle increase, as in France, the fascist-populist demagogy advances and the use of the huge immigration waves, caused by imperialism, to divert the anger of the masses not towards the domination of the ruling bourgeois forces but towards the migrants, provoking a war between the poor.

In this national and world situation, the task of the communist, revolutionary and progressive forces in the world is huge.

To affirm the irrefutable truth that the only alternative to waged slavery, exploitation, oppression, domination, misery, discrimination, devastation, crises and wars created by capitalism in today’s world is socialism and communism.

To develop and build the parties of the working class, to root them among the masses; to wage a hard struggle within the ranks of the masses for the ideological and political independence of the proletariat, based on Marxism-Leninism-Maoism; to build mass organizations under the leadership of these parties, able to lead the struggling sectors of masses and tear them away form the influence of the reactionary fundamentalist Pan Islamist. fascist-populist forces as well as the remnants of the social democratic and reformist forces; fight economism, legalism, imperialist chauvinism.

To organize the proletariat and mass resistance to internal reactionaries wars and, when the imperialist war advances, make serious determined preparations, to transform it into revolution; to build the militant and fighting forces of the masses to respond to state repression and fight fascist groups; to direct and pave the way for a true revolutionary struggle to overthrow imperialism, its states, its governments and establish the proletarian power.

The proletariat is an international class.

It is the most revolutionary class.

It can free himself only by fulfilling the mission of emancipating the whole humanity, a world task to be carried out leading the world socialist revolution to the victory, destroying the imperialist system and all the reaction and thus advancing towards communism.

This year occurs the 100th anniversary of the Foundation of the Third Communist International, founded by Lenin and led by Stalin.

As Lenin pointed out: “The epoch-making significance of the Third, Communist International lies in its having begun to give effect to Marx’s cardinal slogan, the slogan which sums up the centuries-old development of socialism and the working-class movement, the slogan which is expressed in the concept of the dictatorship of the proletariat.”

The Third International and Its Place in History 1919

The grand epic of its foundation, its development and effectiveness in every corner of the world has represented the most gigantic step forward for the proletariat and the international communist movement.

It allowed extending the world historical significance of the October Revolution and the building of genuine communist parties in every corner of the world.

It treated and solved all the problems of tactics and strategy necessary for the victory of proletariat in the imperialist countries as well as in the countries oppressed by imperialism.

It allowed the proletarians and the peoples of the world to unite in the grandiose and epochal battle to defeat the imperialist world war II and defeat Nazi-fascism.

It provided the historical, theoretical and political heritage on whose base the theoretical, political and organizational struggle against the emergence of revisionism developed in the international communist movement, even after its dissolution, against the abandonment of the dictatorship of the proletariat and socialism and the path of revolution for the violent demolition of the bourgeois state.

Mao Zedong said: “During its entire existence it has rendered the greatest services in helping each country to organize a truly revolutionary workers’ party, and it has also contributed enormously to the great cause of organizing the anti-fascist war.”

Mao Zedong also developed a critical summation of its its errors and shortcomings, as well as of the socialist construction in the USSR, up to the Great Proletarian Cultural Revolution as a further step forward, which inspired the gigantic wave of rebellions in the 70s.

The taking up of all this historical heritage is needed today more than ever for a real advancement of the international working class movement and the communist MLM movement in order to get rid, by means the active ideological struggle and the two-line-struggle, of the influences of the right revisionism-opportunism that leads to capitulation and also, as a secondary enemy but harmful to the purpose the ‘leftist’ opportunism, dogmatism and petty bourgeois revolutionism.

This May Day, the genuine MLM communists call for:- a unity based on Marxism-Leninism-Maoism, on the path of people’s war for the development of the world proletarian revolution.

A unity that will develop mutual help and cooperation to make common steps forward in the construction of proletarian parties able to lead the class struggle through the direct experience of the proletarians and peoples, towards the development of new democratic and socialist revolutions.

– a unity of action in the fundamental fields of the class struggle both in the imperialist countries and in the countries oppressed by imperialism: the support to the People’s war in India, the Philippines and all the countries, Peru, Turkey etc.- where the path of the people’s war is developed at different stages; the defense and release of the political prisoners and prisoners of war in the world; the development of the anti-fascist and anti-imperialist front; the unity of the classist trade union organizations; the development of women’s struggle and proletarian feminist revolutionary organizations.

It is to achieve this goals that today we need the Marxist-Leninist-Maoist International Joint Conference of the MLM parties and organizations, with meetings and content discussions about ideological political items and tasks of this.

In the year of the 100th anniversary of the Communist Third International, let us organize a preparatory meeting this year, to reach this International Conference.

STOP THE MARCH OF FASCIST FORCES ON ALL FIELDS

FIGHT THE REFORMIST AND POPULIST PARLIAMENTARY WAY, ACCORDING TO THE SPECIFIC CONDITIONS IN EACH COUNTRY

BUILD COMMUNIST PARTIES IN THE FIRE OF THE CLASS STRUGGLE AND CLOSELY LINKED WITH THE MASSES ESTABLISH THE PATH OF PEOPLE’S WAR AS THE WAY TO NEW DEMOCRATIC REVOLUTION AND SOCIALIST REVOLUTION IN ACCORDANCE WITH THE CONDITIONS OF EACH COUNTRY LONG LIVE PROLETARIAN INTERNATIONALISM!

LONG LIVE THE 100th ANNIVERSARY OF THE COMMUNIST THIRD INTERNATIONAL AND ITS IMMORTAL STRATEGIC AND TACTICAL LESSONS!