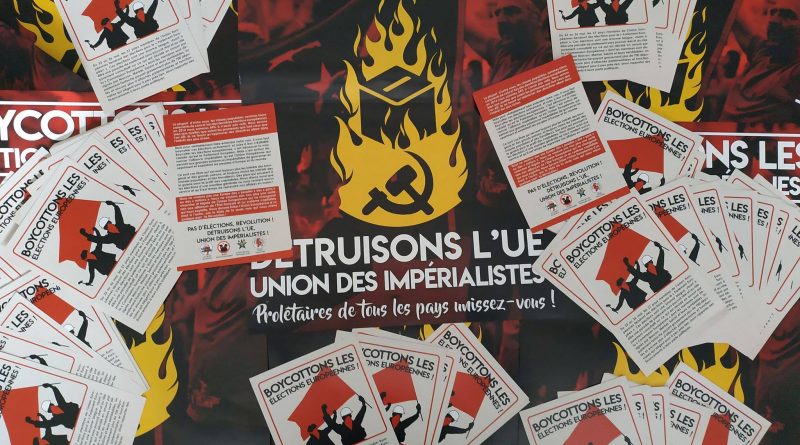 From May 23rd to 26th, the 27 member countries of the European Union will hold elections for the “European Parliament”. These elections are a huge joke, aiming to elect a mock parliament without real power and with a purely advisory role on what is decided upstream by the “European Commission,” whose members are appointed by Macron, Merkel, Salvini and their ilk. A puppet parliament pays handsomely, has more than 700 deputies and even more parliamentary attachés and officials who sit for almost no reason, except to bring back funding to their political parties.

Most of us, from the working class, are well aware of this and in the last European elections in 2014 54% of us have not voted.

We know that whatever promises are made by those who are elected, they will only approve directives that are in the interests of the wealthiest.

It is these states that always serve the interests of the bourgeoisie and of the big bosses, and less and less the interests of the peoples’ masses and the workers. Those are the countries pushing for war for the benefit of capitalists. We also say that elections in general do not do serve us, and it is time to take back our lives and matters into our hands!

We do not want a Europe of “peoples”, “people” or “nations”. We also do not want a chauvinistic and legal exit from the European Union that would not change the alliances of the French State and the capitalist system that exploits us. We must break the European Union from one end to the other, through the only path that leads us somewhere: the Revolution!

Boycott the European elections!
No elections, Revolution!
Let’s destroy the EU, union of the imperialists!