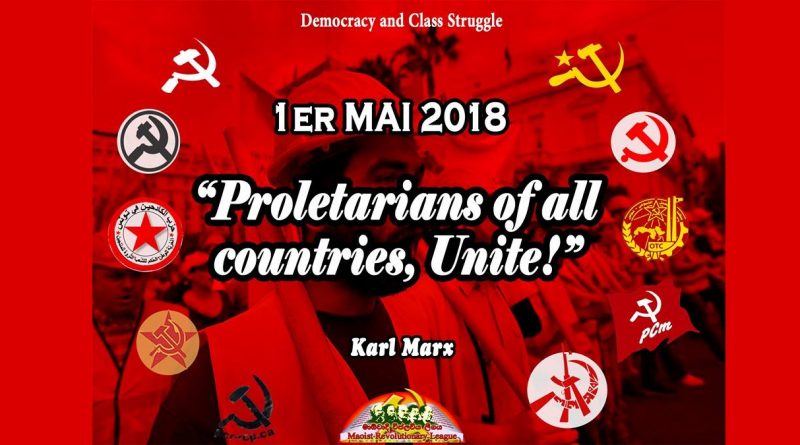 On 1st May 2018 – on the 200th anniversary of the birth of Karl Marx, and on the 170th anniversary of the first issue of Manifesto of the Communist Party, written by Marx and Engels – is the great opportunity to affirm their relevance and power, as living weapons of the communists and the proletarians of yesterday, today and forever.

“The history of every society that has existed so far is a history of class struggle.”

“The political power of the modern state is just a committee that administers the common affairs of the entire bourgeois class.”

This system produces continuous crises – the Manifesto writes – these are crises of overproduction that are the manifestation of the fact that “bourgeois relations have become too narrow to contain the wealth that they themselves produce”.

How does the bourgeoisie manage to overcome the crises? “On the one hand through the forced destruction of a great quantity of productive forces, for another with the conquest of new markets and more intense exploitation of those already existing”.

But this only prepares new and formidable crises.

But the bourgeoisie has not only created the weapons that produce death but also men who can use these weapons to put an end to their system.
“These men – the Manifesto writes – are the modern workers, the proletarians, who live until they find work and find work as long as their work increases capital”.

“Of all the classes that today are opposed to the bourgeoisie, only the proletariat constitutes a truly revolutionary class; the other classes are corrupted and perish and when they want to go back to the previous privileges they are conservative and reactionary; when they fall into the mass of the proletariat they are part of the proletarian class struggle”.

“Only one way can the proletarians seize the social productive forces, which is to abolish the whole system of existing appropriation”.

“History, therefore, becomes the history of the class struggle and this class struggle is the more or less hidden ‘civil war’ that troubles current society until the moment it explodes in an open revolution and the proletariat establishes its domination with the violent overthrow of the bourgeoisie”.

The aim of the communists is clear and precise: the formation of the proletariat in class, the overthrow of the bourgeois domination, the conquest of political power by the proletariat.

The task of the Communists is traced in an eternal and indispensable form by the Manifesto, they “struggle to achieve the immediate aims and interests of the working class, but in the present movement they represent at the same time the future of the movement itself. They work to awaken in the workers the conscience, as clear as possible, of the hostile antagonism existing between the bourgeoisie and the proletariat, so that the workers can convert into direct weapons against the bourgeoisie the social and political conditions”.

“The communists everywhere support every revolutionary movement against the existing social and political conditions and in all these movements stress the question of the ownership of capital as a fundamental problem”.

“The Communists – today more than ever teach us Marx and Engels – disdain to hide their opinions and their intentions and openly declare that their objectives can be achieved through the violent overthrow of the whole social order existing … because the proletarians they have nothing to lose but their chains and have a world to win”.

Capitalism, analyzed by Marx, who has become imperialism in Lenin’s development, continues to go through a profound economic crisis and unload it on the proletarians and peoples of the world.

They speak of “recovery” but the only thing that resumes is the race for profits, wealth and armaments.

For the proletarians and the popular masses we have unemployment, precariousness, exploitation and slavery, poverty, robbery of raw materials and energy resources, devastation of the environment and territories.

Proletarians and peoples resist and develop their struggles and people’s wars to affirm the revolution as the main trend.

The imperialist bourgeoisies and the reactionary states enslaved to them intensify the inter-imperialist quarrels, unleash commercial and through a third party wars, revive the tendency towards a new world war of division.

Against the way of the revolution is opposed within the workers’ and popular movement, the path of reformism, the path pursued by revisionists and social democrats, to reconcile with governments and imperialist states and to favor the realization of their plans.

In front of the crisis of reformism, social democracy and revisionism, new populist electoral forces that use reactionary demagogy to divide the masses and take them to the chariot of the ruling classes are advanced in the interest of the bourgeoisie and the imperialist states. Populism fuels fascism and neo-Nazism.

Communists and avant-garde proletarians work to turn the rebellion of the masses into a victorious revolution, of New Democracy in the countries oppressed by imperialism marching towards socialism, and in proletarian and socialist revolutions in imperialist countries marching towards communism. The communists, based on the ideas of Marx, Lenin and Mao applied to the concrete reality of each country, build and develop new genuine revolutionary communist parties, united fronts directed by the proletariat of all the exploited and oppressed masses, combat forces and revolutionary and popular armies.

Only where the masses have these instruments, their heroic and generous struggles can win.

On a world scale, the people’s wars led by the Marxist-Leninist-Maoist parties are the decisive and essential strategic indication.

The people’s war in India, directly affecting one of the main bastions of imperialism and reaction in the world, is a powerful reference point, along with people’s wars in the Philippines, Peru, Turkey. Today they concretely show the way to overthrow the system of exploitation and oppression of imperialism and of all reactionary reactionary forces, for the construction of a new power and a new society.

The MLM communists must unite and strengthen their unity, freeing the ranks of the international communist movement from revisionist and capitulationist tendencies, without at the same time falling into the sterility of petty bourgeois revolutionism, of dogmatism.

The construction of the communist parties is only possible in the fire of the class struggle in close connection with the masses, as a function of the authentic revolutionary struggle for power.

In the 200th anniversary of the birth of Karl Marx we declare with force that Marxism-Leninism-Maoism is the Marxism of our age! The essential basis for the unity of communists all over the world.

“Proletarians of all countries, Unite!” the great slogan indicated by Marx, it is the red flag of proletarian internationalism, it is the weapon for the construction of a new Communist International.

The future of communism is in our hands.