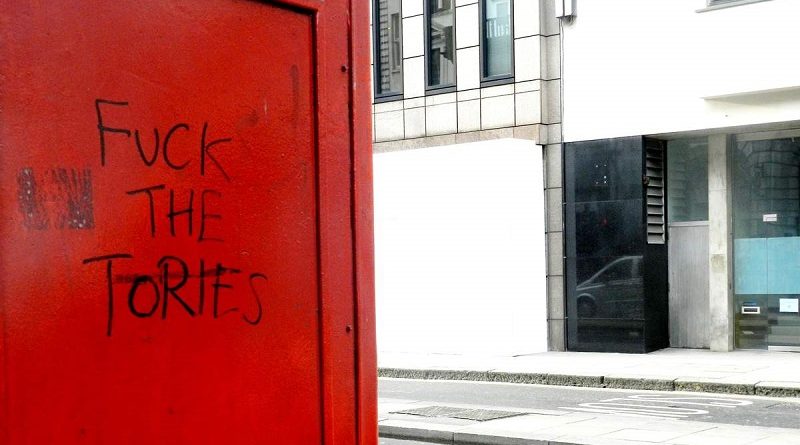 Many, if not most, Tories don’t like the working class. Thus very often they go out of their way to make life difficult for working people even if those doing so obtain for themselves no immediate advantage, financial or otherwise. For example, in introducing the new system for paying benefits, Universal Credit, it has been done so that recipients have to wait six weeks or more before they receive any payments. This means that people have to try to borrow money or ask family and friends for handouts to cover the gap. This is quite unnecessary because the State has adequate funds to pay the benefits on time. So why do the Tories do things like this, especially as it is likely to antagonise some workers against them?

Tories tend to have a negative view of the working class. They see them as not too bright, unimaginative, surly, lazy and as thinking that the world owes them a living. In providing employment for workers, Tories see themselves as benevolent beneficiaries of these undeserving laggards. When workers ask for improvements in their pay and conditions the Tories view this as gross ingratitude towards those who have provided them with opportunities to earn anything at all. Further, they claim that rises in earnings will generate inflationary pressures which will destabilise the economy and thus be to the disadvantage of the working class. These people don’t know what’s good for them and have to be told so by their superiors.

This attitude towards the working class is part of the false consciousness of the capitalist ruling class and their functionaries i.e. the higher level managers and administrators in the economy and state apparatus. It is a distorted view of society which serves to justify to themselves their privileged position in society. The fact of the matter is that these people are living off the exploitation of the working class. The profits received by the owners of industry and commerce constitute that part of the economic value created by workers but which they do not receive. The large salaries of senior civil servants and high level local government officers come from the taxes paid mainly by workers. The truth is that these people are not doing the working class any favours. On the contrary, they are parasitic upon the working class. This characterisation of the working class by Tories helps them to avoid facing up to the fact that they are the real parasites.

The capitalist class and their political representatives in the Tory Party largely control the means in society whereby ideas are disseminated among the population at large. The mass media are particularly important in this respect and it is by this means that many members of the working class pick up and internalise negative representations of working people. Thus a lot of workers, to a greater or lesser extent, adopt these attitudes towards themselves and their class. They are quick to believe that people receiving welfare benefits are “social security scroungers”, that groups of workers who through industrial action manage to achieve relatively high wage levels, e.g. train drivers, are “greedy”, that successful capitalist entrepreneurs of working class origin, such as Alan Sugar, deserve what they’ve got because they got it through “their own efforts”, etc.. These ideas, originating in the ruling class, are part of the false consciousness of the working class. Such negative self-images have to be internalised and reinforced if the working class are to accept, however reluctantly, their subordinate and exploited position in capitalist society.

But there is another side to working class social and political consciousness and this is generated out of their own everyday experiences in work and the wider community. This takes a more critical view of the ruling class and their functionaries. It sees mainstream politicians as “being in it for themselves”, as business firms “ripping us off” and the mass news media as telling “a load of lies”. This is the true consciousness side of the outlook of the working class which is in dialectical contradiction with the false consciousness side. Unfortunately for most workers most of the time the stronger side of their consciousness is that which accepts the negative view of them emanating from the ruling class. Indeed, if this were not the case then capitalism would not last long because masses of workers would revolt against it.

To put the matter a different way, the working class don’t hate the ruling class and their Tory political representatives as much as the latter hate the workers. Working people are too ready to turn the other cheek. The problem is to get the workers to be less forgiving, less nice towards their exploiters, to learn to hate them more. Some people will be shocked by this suggestion but pacifist tendencies have been one of the factors holding back militant working class opposition to capitalism. Pacifism is not one of the characteristic traits of the bourgeoisie.

An important task of revolutionary communists is to target and expose particularly repulsive members of the bourgeoisie and their Tory political representatives, e.g Philip Green, Mike Ashley, Jacob Rees Mogg, “Boris” Johnson, etc.. Full background details of these people should be disseminated, e.g. the location of their offices, where they live, where their yachts are anchored etc. Let’s make them feel unwanted.

WORKERS, LEARN TO HATE YOUR ENEMIES!