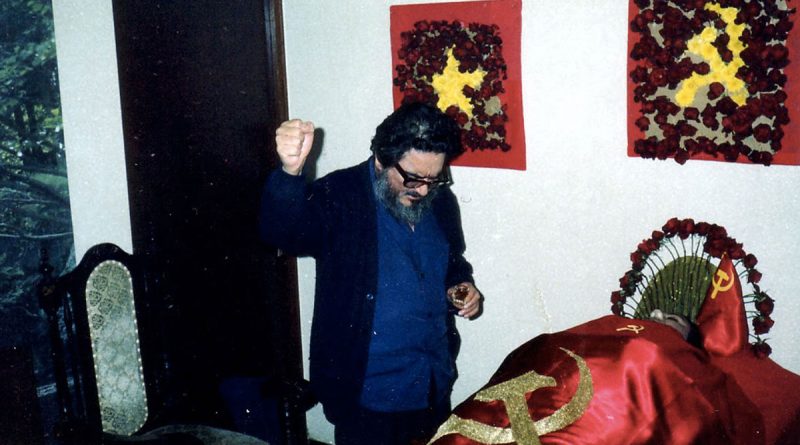 Yesterday, Dec. 3 2017, was the 83rd birthday of the greatest living Marxist-Leninist-Maoist alive, the fourth sword of Marxism, who – with the Communist Party of Peru and the Peruvian masses – introduced contemporary revolutionary Maoism to the world, Manuel Rubén Abimael Guzmán Reynoso, also known as Presidente Gonzalo.

A man imprisoned by the Peruvian state, kept behind bars since his capture in 1992, for the rest of his life. Abimael Guzman is kept in a subterranean cell in the maximum security Callao naval base surrounded by round-the-clock military guards and landmines.

A man who, still, does not fear death. But rather, whose life and ideology are still feared by the Peruvian state and the international revisionists and bourgeoisie. His Peruvian and international supporters and students continue to call on the defense of his life – from India, Finland, Germany, the Netherlands, Turkey, Columbia, Mexico, Italy, Spain, the U.S., Canada and other countries across the globe.

As we utilize the birth date of Presidente Gonzalo to reaffirm our commitment to proletarian revolution, to reaffirm the greatest weapon of the proletariat and the oppressed, Maoism, we must also honor and reflect on today – Dec. 4 – the anniversary of the martyrdom of Black revolutionary communists – Chairman of the Illinois chapter of the Black Panther Party for Self-Defense Fred Hampton and comrade and Party member Mark Clark. Chairman Fred Hampton and comrade Mark Clark were martyred by the Chicago police with the assistance of federal agents and treacherous informants in 1969.

And on the other side of the ocean in France, comrade Pierre has fallen, a revolutionary senior leader of the Maoist Communist Party of France (Parti  Communiste Maoïste – PCM) who took up the scarlet flag of Maoism only to pass it down to future generations: the obligation of any Maoist.

Or as one comrade put it:

“Today, a great comrade has gone. He was a man who inspired generations of communists, who gave his whole life to the service of a greater idea of humanity, serving a future of justice and freedom. He represented the transmission of knowledge, and he passed the torch to the PCM with a tireless energy, representing the living memory of the struggle. More than a comrade, many of us considered him a brother, a father or a grandfather, smiling and full of common sense. He fought against all deviations, against all renouncement, sometimes almost alone against all. Comrade, we will not forget you. For us you are an example, and in our struggle you will live forever. Your memory is with us, wherever this flag you love so much, the red flag struck by the hammer and sickle. Long Live Marxism-Leninism-Maoism! Comrade Pierre, present! Salute and honor!”

To be a revolutionary, to be a Maoist, must mean to be fearless and to surrender to the historical and philosophical acceptance of giving one’s life for the revolution.

“Fear? I believe that fear and lack of fear form a contradiction. The point is to take up our ideology, and unleash the courage within us. It is our ideology that makes us brave, that gives us courage. In my opinion, no one is born brave. It is society, the class struggle, that makes people and communists courageous–the class struggle, the proletariat, the Party, and our ideology. What could the greatest fear be? Death? As a materialist I know that life will end some day. What is most important to me is to be an optimist, with the conviction that others will continue the work to which I am committed, and will carry it forward until they reach our final goal, communism…” – Abimael Guzman