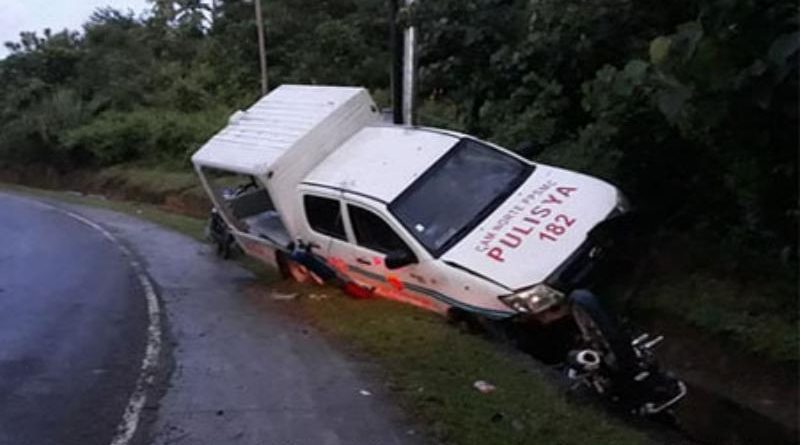 The Armando Catapia Command (New People’s Army – Camarines Norte) launched an ambush yesterday, December 2, in Sitio Binuang, Barangay Daguit, Labo, Camarines Norte. The said ambush is in response to the call of the Communist Party of the Philippines (CPP) for the NPA to intensify tactical offensives as part of overthrowing the fascist regime of Rodrigo Duterte. The ambush also serves as a punitive action for military abuses and extrajudicial killings perpetrated by the government forces in Camarines Norte.

At past 1:00 a.m., December 2, a unit from the Armando Catapia Command (ACC) ambushed two police mobiles of the Provincial Public Safety Company (PPSC) of the Camarines Norte Provincial Office (CNPPO). With the help of the people, the ACC was able to study the pattern of activities of the police unit and waited as the police mobiles traversed the Maharlika Highway. The two mobiles were then blown up using command-detonated explosives, in adherence to the Geneva Conventions. A 15-minute firefight ensued, wherein PO2 Richard M. Abad was killed, while eight (8) of his companions were wounded, namely, PO2 Ronald Gutierrez, PO2 Ericson De Vera, PO1 Jeffrey Tarrobago, PO1 Pedro Valero, PO1 Romar Umandap, PO1 Johnson España, PO1 Mark Anthony Aguilar and PO2 Rommel Orante. The ACC unit was also able to seize four (4) M16 rifles, one 9mm handgun and ammunition from the police. There were no casualties from the ACC.

The New People’s Army (NPA) in Camarines Norte, being under the absolute leadership of the CPP, also condemns Duterte’s arbitrary termination of the peace talks. The termination disregards the detailed program for socio-economic reforms proposed by the revolutionary forces, through the National Democratic Front (NDF), which aims to end poverty and injustice, the root causes of armed struggle. This proves that Duterte was never interested in genuine peace. All he wanted was to silence his critics and those protesting his incompetence in resolving poverty and his all-out-war against the people – his unsuccessful drug war, the aggravated Marawi situation, the attack on activists, and the all-out-war in the countryside. To suppress the strongest forces of opposition, Duterte has also labeled the revolutionary forces of the CPP, NPA and NDF as terrorists, in accordance with the counter-insurgency doctrine of the US.

The ACC extends its gratitude to the people of Camarines Norte for their support towards achieving the victories of the people’s war. They can be assured that the ACC will continue to advance and strengthen the revolutionary armed struggle and to continue the offensives against Duterte’s fascist machinery. The US-supported all-out-war and calls for surrender will never weaken the resolve of the Red fighters to defend the people against the real terrorists – the US, Armed Forces of the Philippines, Duterte, and those who will follow in his fascist footsteps after he is overthrown – and to establish the People’s Democratic Government, the true revolutionary government of the Filipino people.