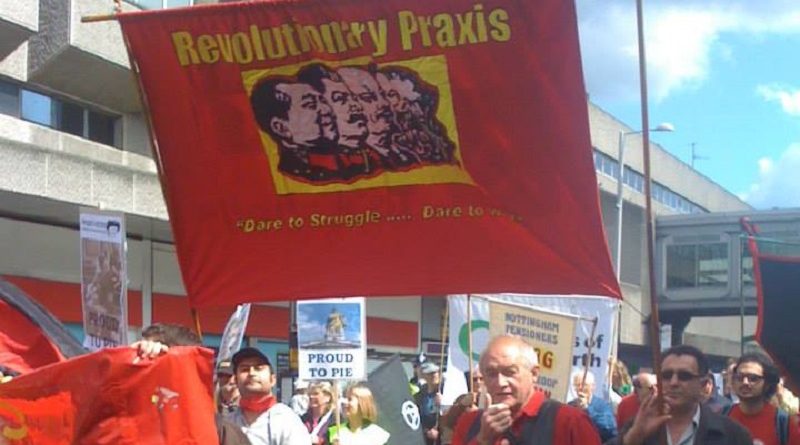 May Day is International Workers’ Day, the day allocated by the working class movement to celebrate its struggles for a better world and a memorial for those workers at Haymarket in the United States who became martyrs in struggle at the hands of the state.

May Day this year should be a time of reflection on the positive results of our class’s struggles of the past and also of the negative outcomes. The Russian and Chinese Revolutions were the great high point of the working class struggle for a better world in the twentieth century and the defeats of these revolutions have been a great setback for our class.

Capitalism may have had a temporary victory in these blows to our class but it cannot solve the problems facing humanity. In the 21st century the need for communism is greater than ever before and the future of our very species depends upon it. In Britain and the West our economic growth is largely based on money laundering, financial speculation and over-inflated land values. The real needs of the people are neglected and welfare provision is being daily cut back while wages stagnate, workers are over-worked and many are thrown into poverty, homelessness and starvation. In the less developed countries progress is held back. Many of the people in these countries and therefore the world live without the basic necessities of life, their countries chained into debt and interest payments and their resources bought sold and pillaged by the big powers led by the USA. This state of affairs benefits a few thousand billionaires whose luxury and wealth is unparalleled in history at the same time as inequality is rapidly widening across the world. This at a time when humanity is at its most technologically advanced and capable of providing food and shelter for everyone.

Britain has a great tradition of working class struggle. The Chartist Movement was a mass working class movement which fought for the rights of the people. They waged many heroic battles and even threatened to march on Parliament and destroy it! Unfortunately in Britain we do not possess such a movement today. We need to start building one and stop tailing the Labour Party, a party of support for capitalism.

In the 20th century the working class movement went from strength to strength gaining many advances and reforms. The greatest victory for the working class and all the oppressed came in 1917 with the October Revolution in Russia. This year is the centenary of the Russian Revolution and the fiftieth anniversary of the Great Naxalbari Insurgency in India which continues its brave and heroic struggle today, even more significant now that India languishes under the jack boot of reactionary Hindu nationalism. The people’s wars being waged by the peoples of India, Philippines and Turkey show the way forward for workers and oppressed people today.

When the workers and oppressed can take control and exercise real collective ownership of the world’s resources a new society would in the words of English communist William Morris “be co-operative in the widest sense. It would of course be subordinate to the real welfare of society; i.e., the production of wares would not be looked upon as the end of society (as the production of profit-bearing wares now is), but it would be regarded as the means for the ease and happiness of life, which therefore would never be sacrificed to any false ideas of necessity, or to any merely conventional views of comfort or luxury.”

“Without a Peoples Army, the people have nothing”
– Mao Tse-tung

It is clear to many people that capitalism is an outmoded and decaying system of waste, inequality, war, pollution and premature death. It’s crap and we need to get rid of it! Armed struggle is an essential part of the class struggle and the means by which capitalism and its state, the instrument of its ruling class, can be overthrown.

In India the Communist Party of India (Maoist) is guiding the Peoples Army with Marxism-Leninism-Maoism which is the shining path to liberation. We in Britain can learn a lot from the struggles of the oppressed masses of India and should ignore the leftist rhetoric of Labour and trade union leaders. Mao Tse-tung said “the East wind prevails over the West wind” meaning the revolution against capitalist imperialism has begun in the poorer east of the planet but will spread west.

All workers, peasants and oppressed people across the planet have the same enemy – global capitalism – and we all have one way out and that is socialism leading on to communism. History never stands still: if we do not move forward then we will move backwards. The choice before us in the coming period is, as Rosa Luxemburg once put it, “Socialism or barbarism”.

Workers and oppressed peoples of all countries, unite!