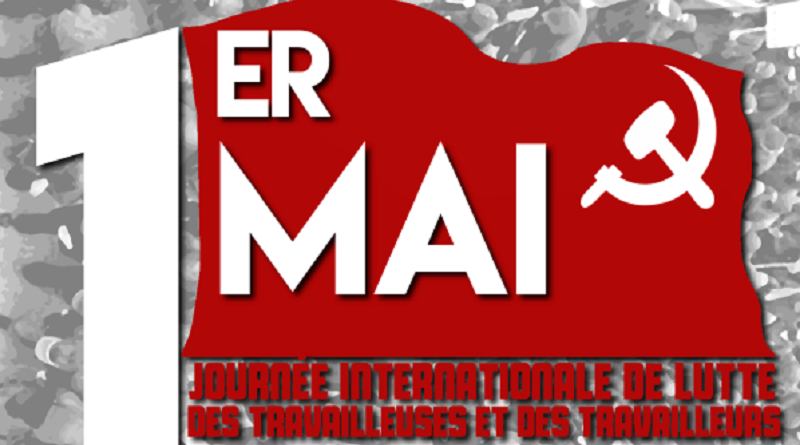 This May 1st is the year of the centenary of the Great Socialist October Revolution. The 1917 Revolution marked the creation of the first socialist state in the world, a victory of great importance to workers throughout the world.

Even today we must seize this heritage, as well as the heritage of the Chinese Revolution, to develop the revolution in our own country. Indeed, it is not the elections that can liberate the proletariat from capitalism’s misery and exploitation, but only socialist revolution. Today therefore the question for the working class is how to struggle to advance this revolution.

On the situation in France…

The five-year term of Hollande has once again shown the true nature of the Socialist Party: a succession of promises in order to be elected and then once in power, anti-people’s governments in the service of the bourgeoisie, which attack all the proletariat conquests one after another. After four years of attack against the proletariat (Pact of Responsibility, ANI, Macron Law…), Holland’s government’s last year had to face the movement against the Labor Reform. It was the greatest movement of class struggle in France of the last decade. This was an extremely important moment for the working class to begin to rebuild class solidarity, to show the strength that the struggle and the combativeness that our class can have.

The working class has nothing to gain in the bourgeois elections. The bourgeoisie only seeks legitimacy by trying to have as many ballots cast as possible. Let us not be divided by their elections, boycott their elections and prepare instead for the struggle under the next five year period because the fight is going to be tough.

…and in the World

After the election of Trump in the United States, a massive mobilization against him took place in the streets. Nearly half of the US population refused to choose between Clinton and Trump and eventually mobilized massively. This must serve as an example, we must prepare ourselves to mobilize against the next government whatever it is, for it will necessarily represent a reactionary offensive against the proletariat.

Under Hollande, French imperialism continued to intensify its wars of aggression initiated by Sarkozy: Libya, Central African Republic, Mali and now Syria. Everywhere in the world, the tendency towards war increases – this tendency towards war is the fruit of the increase of inter-imperialist contradictions. American imperialism, which played the role of the cop of the world, sees its position as endangered; it is an imperialism in crisis which is declining, facing new imperialists such as Russia and China. This situation leads to wars to re-divide the world, increasing the risk of a widespread war. Against the imperialist war, there is only one solution: socialist revolution. Just as the October Revolution put an end to the imperialist war in Russia, today we have to fight against our own imperialism and build the tools to move towards revolution.

The most advanced revolutionary movements in the world today are the People’s Wars leaded by Communist Parties based on Marxism-Leninism-Maoism. This is the case with the People’s War in India and the Philippines, where the Communist Party-led masses carry out extreme revolutions by fighting imperialism, bureaucratic capitalism and feudalism and by building a new power, putting in place the agrarian revolution to reappropriate the land, organizing the workers in the industrial centers, and so on.

Let us prepare ourselves for the struggle and for the revolutionary response!

Nothing will come out of the bourgeois elections for the working class. We must prepare ourselves today for the struggle under the next government. This struggle must be based on a revolutionary perspective, there is nothing to expect from capitalism, which is in its decaying phase.

To advance the struggle, there is a need of a powerful Revolutionary United Front with a revolutionary strategy. To create this revolutionary front, we must organize ourselves wherever our class is and wherever our class meets exploitation and oppression: in working-class neighborhoods on the issue of housing, police violence, at work through trade-unions, we must create organizations that can respond directly to our needs, create cultural and sporting associations in all spheres of life to strengthen our solidarity and develop class consciousness. We must develop a proletarian feminist movement to fight patriarchy. This front must be openly anti-fascist.

And to carry out all these struggles, we need a Communist Party, a Party capable of giving a revolutionary perspective, a Party capable of fighting and offering a consistent strategy against the capitalist system under present conditions. This Communist Party is the Maoist Communist Party. Our strategy is Protracted People’s War: the revolution will not be a “great evening” that will fall from the sky, it will be a long process, it will be a violent process that will undergo different stages. This revolution, we must begin to prepare it now and not wait for it.

Long live the Centenary of the Great October Revolution! Let’s learn from our History to move forward!

Let us develop the class struggle based trade-union and arm the proletariat of combattive organizations on all fronts!

Death to Imperialism! Long live the international solidarity of all oppressed workers and peoples!

Against the war and the aggressions of the bourgeoisie, let us prepare People’s War to build socialism until communism!