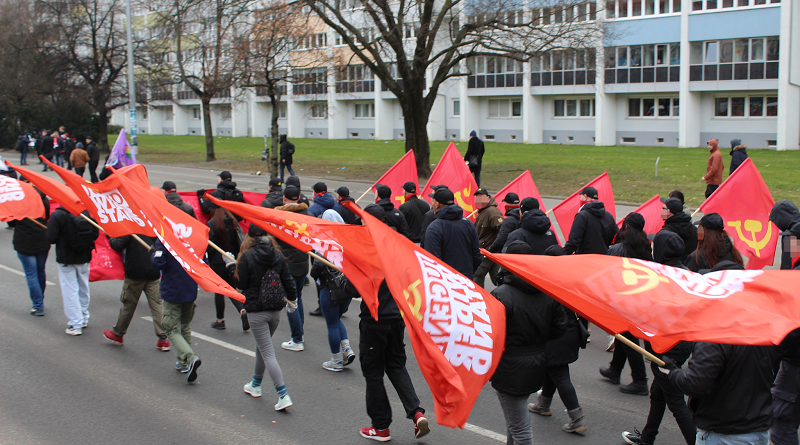 We left behind us a successful Lenin-Liebknecht-Luxemburg Weekend in honor of the great Lenin, of the founders of the Communist Party of Germany and in honor of all the dead of our movement and the international proletariat. Based on our experience in the last two years, this time we can further expand the scope of our actions in quantity and quality and thus, in the future, to organize a worthy commemoration. 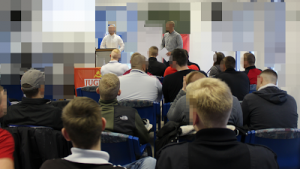 The day before the demonstration, we held a Maoist conference with our comrades here and abroad. International guests from the Tjen Folket of Norway and the Maoist Communist Party of France reported in their vigorous speeches about their ideological development, their history and about work in their respective countries. A greeting from the Italian Maoists of the PCm was also read. Then, comrades from the west, north and east of Germany reported on their antifascist struggle from their concrete local conditions, how they came to MLM and how they built their youthful red circles. Then there was a brief intervention by Jugendwiderstand (Youth Resistance) that gave a perspective of the next tasks and stressed the need for an organizational leap for the red youth, with the purpose of carry out the legacy of Lenin, Liebknecht and Luxemburg. Later, a powerful speech by Maoist communists that was sent to us was read, which concretized the path of the revolution in Germany. The speech was read with enthusiasm by the speakers and ended with loud songs of “Honor and glory to the martyrs!” and “Everything for the people, the class and the party!”.

The conference was characterized by proletarian optimism and the solidarity network in the spirit of proletarian internationalism and national unification and therefore represents an important part of the events of the Memorial Weekend for the Martyrs. 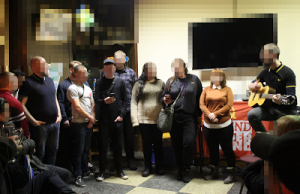 At evening, we celebrate our own cultural event in the premises of the Neukölln district. Inaugurated by a concurrent speech, a delegate from each of the MLM organizations took the floor; Revolutionary Praxis of England and Irish Socialist Republicans of Ireland, presenting their organizations and transmitting their greetings. Then the red rap of our rappers in Berlin: Masur & Crudelis, Detweiler and Tactikka. Meanwhile, there were brief representations of speeches by Rosa Luxemburg and Karl Liebknecht. Later, a German choir sang the old song of the KPD/ML (Communist Party of Germany/Marxist-Leninist) “Auf ihr Arbeiter, Brüder” (To your workers, brothers). After this, the impressive choir of the Norwegian comrades of Tjen Folket, accompanied by guitar music, with their own creative compositions and the partisan song “Bella Ciao”. Later, the French comrades sang the central song of the Maoist movement in France, “Les Nouveaux Partisans”, favorite song of the recently deceased Comrade Pierre, important MLM thinker and leader of his party.

The event ended before midnight with thunderous slogans and the multilingual singing of our class’s common anthem: The International. More than 70 people attended the cultural evening. The attendance of people from the neighborhood was especially gratifying. The event as a whole demonstrated to what extent our culture can become a struggle weapon. Especially our red rap, fed by a deep class hatred, is an instrument that we will use again next year. 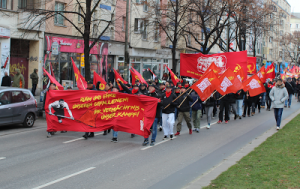 On Sunday morning our block aligned with several Turkish/Kurdish organizations. In disciplined rows of four, we established an appropriate block for that day under our banners, with intense slogans, uniform appearance and militant attitude.

It is known that we decided to oppose the line and direction carried out by the Kurdish national movement. However, our block did not hesitated when the state police harassed the Hevals once more, breaking into the Kurdish back of the Antifa block hitting people and making arrests for displaying banners.

The block advanced closed and uniform forward and showed solidarity in a practical and offensive way with the harassed. Unfortunately several comrades were later arrested, had to spend up to a day behind the bars of the enemy and now face hypocritical accusations; 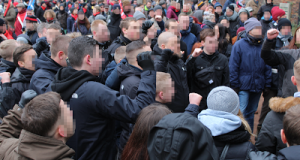 attempt to release prisoners, serious injuries, resistance, disturbance of public order and insults to the face. We know that these intimidations, as so many times, are useless and surrender is not an option for anyone. We give those affected by repression our promise to work with more energy and devotion to serve and fight. 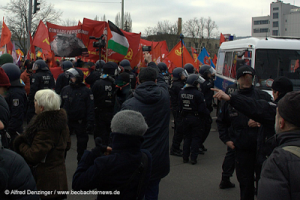 Despite the henchmen of the system we were not left aside, we managed to avoid more arrests and attacks in our block through organized and disciplined behavior and a judicious and tactical action. With this, we also want to emphasize and praise the solidarity resistance of the “Revolutionary Block” that ran for us!

Another hammer and sickle flag waved in the wind at that moment. At the time of the state attack against the Antifa block the Hamburg Sect acted as they always do in such situations. They keep their own masses pretending to fight away from the battle and send two alibi-flag-wavers to the front to maintain the appearance of participating in the riots and, in the best of cases, to produce some useful images to later look great on the Internet.

In general, the Hamburg Sect appears again this year as if it had political relevance, mainly through the group that they recently annexed as parasites. His bragging last year about “In the FRG, in general, this problem is basically solved” (on the issue of leadership of the political resistance movement) and the “struggle and time” that would lead the international communist movement through intrigues and lies against the Jugendwiderstand and on the side of the Hamburg Sect, converted, as so many times with colleagues, into nothing more than hot air.

We finish our activities in the LLL demonstration as in recent years, heading together towards the tombs of the martyrs. There, one of the comrades gave a speech urging us to be disciplined, willing to sacrifice and to be optimistic for the next year of struggle, and once again, honoring the fallen, together we sing The International. Our weekend for the martyrs was completed with the march to the socialist cemetery, but it did not end there. 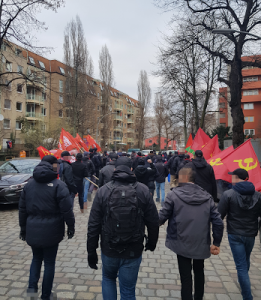 Beyond police surveillance, we returned to Neukölln, our neighborhood. There we formed our alignment again, the banners were redeployed and the flags were raised to make a short and powerful spontaneous demonstration so that the names of the proletarian martyrs and the class tradition would dress the red working district of Neukölln. 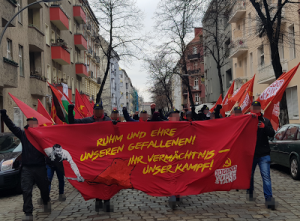 The demonstration was welcome in Neukölln. Local residents joined spontaneously, the demonstration was received by some of them with flags and later, there was praise for the youth for their activity. This confirms once again the strong link between Jugendwiderstand and Neukölln, between the popular masses of the neighborhood and the revolutionaries, which we will strengthen, expand and harden for next year.

Through this new and powerful accent the weekend ended properly. By keeping our word alive with the spontaneous manifestation we made the martyrs live in battle in a militant way. We take them to where they lived, fought and where they finally fell: Among their class brothers. 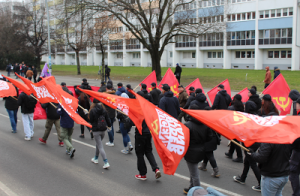 We believe that we have the great task of carrying out a worthy commemoration, a work even better organized than the previous ones. We have held a conference to fight for the reconstitution of the KPD in the direct tradition of the martyrs and founders of the party and to debate on its behalf the concrete and urgent tasks of the present and thus be able to move forward. Nothing else can be in the mind of Rosa and Karl, because they were communists and militants. 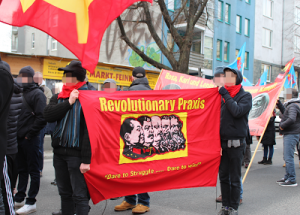 We have organized a cultural event to give a concrete, traditional and appropriate form to the commemoration. The speeches, selected quotes, slogans and traditional worker songs provided a serious and communist character of the event, while the rap performances focused all their attention on the culture of the present, and the event, despite its seriousness, did not was stale or outdated. After all, what good is it to wallow in nostalgia and become the next club of arbitrary interpreters of history, if we can not create for the youth the great sacrifice of communists and fallen revolutionaries? 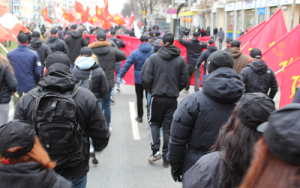 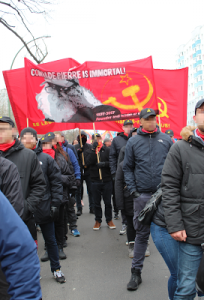 A corrective that summarizes in a few words what a communist demonstration should be: orderly and marching in formation, with clearly distributed tasks, active participation, with ferocity, combat readiness and, above all, ideologically clear. In times of unbridled opportunism and revisionism, the most important thing is that the block, which for the third time is carried out unambiguously and with pride among the 5 classics of Marxism, grows and gains in vitality and discipline.
We salute all the comrades, men and women, who with us have turned these days into a victory.

Glory and honor to the martyrs, their legacy is our fight! 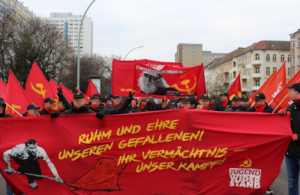