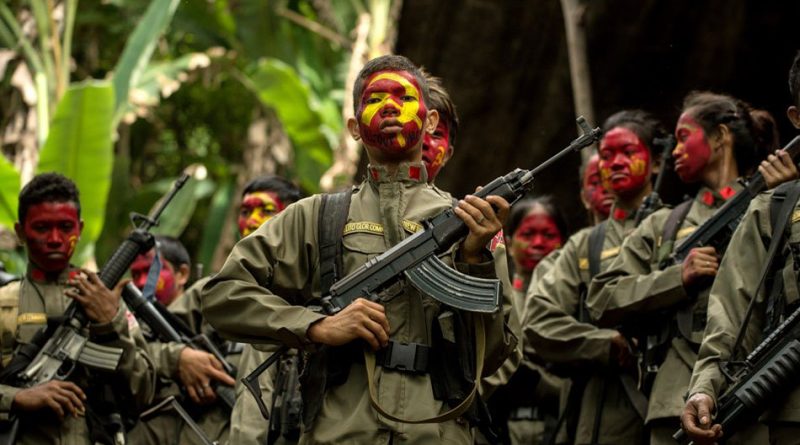 In response to the US-Duterte regime’s all-out war offensive and troops build-up in Southern Mindanao, with special focus in Lumad areas, the New People’s Army Regional Operations Command in Southern Mindanao has directed all NPA units to persist in the expansion and consolidation of revolutionary mass base and launch attritive and annihilative attacks to disperse enemy concentration and thwart treacherous military operations.

The NPA Regional Command also ordered all subregional NPA units to impose standing order and punish the most rabid Police and Army officers and members, intelligence units and civilian operatives who mastermind and implement the heinous extra-judicial killings and rights abuses against hapless civilians.

The NPA-SMROC congratulates Red fighters and operatives for imposing its standing order to Cafgu leader Banadjao Mampaundag and son, Jhonard, who was also a Cafgu, in Sitio Igang, Brgy. Palma Gil, Talaingod, Davao del Norte on February 4. The two were armed and attempted to open fire against the Red fighters. Seized from them were .45 caliber pistol and a shotgun.

Mampaundag was no hero or a benevolent tribal leader of Talaingod but a longtime Cafgu and rabid recruiter of the notorious Alamara paramilitary forces under the payroll of the 10th Infantry Division-AFP. He was responsible for crimes against the people such as landgrabbing, theft and extortion, grave abuse, and host of other human rights atrocities.

Despite appeals from his relatives and civilians in the community, he pushed for building a military detachment in the area and organized Alamara forces for counter-revolutionary operations.
Lumad villagers who refuse to enlist in the Alamara Cafgu training were ordered to leave their homes and farms.

Mampaundag was active in intelligence gathering and psychological warfare campaign in the area.
He also engaged and extorted for profit the sale of ancestral lands including lots and farms with dubious land titles which he did not own to unsuspecting non-Lumad buyers and interested parties.

NPA fighters have repeatedly issued warning to Mampaundag and his son Jhonard, to desist from engaging in criminal activities and in the counter-revolutionary operations. In several occasions, Red fighters patiently explained to Mampaundag the perils of military detachment building amid the civilian populace, the conscription of Lumad for paramilitary work, and the dangers in abetting enemy’s search and combat operations.

The Mampaundags had refused to heed these warnings and continued with their counter-revolutionary activities.

The Lumad and civilians of Talaingod have long clamoured for justice and for the Mampaundags to answer for their crimes.

Weighing on the grave abuses and injustice masterminded and implemented by the Mampaundags in Talaingod, the NPA has meted the revolutionary justice that the masses have long sought for.

The revolutionary justice is in stark contrast to the extra-judicial killings ordered by GPH Pres. Rodrigo Duterte and carried out by the PNP against poor civilians linked to illegal drugs. The drug-related killings smokescreen and protect the biggest drug syndicate run by the Duterte family and its allies in power.

The revolutionary justice of the NPA is also in contrast to Duterte’s policy of elimination and neutralization of members of legal organizations accused as communist fronts.