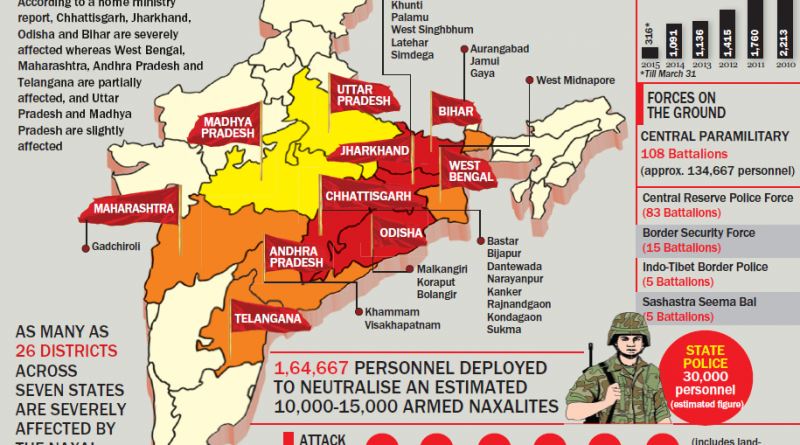 Bhupalpally: Maoists’ bandh on Monday, accusing the state of detaining innocent tribals and implementing anti-people policies, further escalated tension in the region forcing the police to beef up the security in forest-fringe villages to avoid any untoward incidents.

In spite of heightened security on the Telangana-Chhattisgarh border, the Maoists set the BSNL cell tower at Edhira under Venkatapuram mandal in Jayashankar-Bhupalpally district on fire in the wee hours of Monday. “Around 20 ultras ransacked the electronic equipment of a cell tower before setting it on fire. We have sent in forces besides intensifying combing operations,” Superintendent of Police R Bhaskaran told The Hans India.

He said that barring this incident the law and order in the district is totally under the control despite the bandh call given by the Maoists. However, there were reports of arson on Chhattisgarh side. Meanwhile, fear gripped the tribals living in villages close on the border of Chhattisgarh. On the other hand, the police alerted those in the hit list of the Maoists.

If what has happened in the Dandakaranya region in the last fortnight is any indication, the outlawed CPI-Maoists seem to be unperturbed by the setbacks it had faced in the recent past.

The enticing surrender policies offered by various state governments and threateningly poised nearly two lakh security forces stationed across the red corridor – Chhattisgarh, Telangana, AP, Odisha, Maharashtra and Madhya Pradesh – that could have suffocated the ultras appears to have no effect on them.

Little over a week ago, around 20 Maoists went on rampage killing a tribal and setting several vehicles at a sand quarry in Veerapuram panchayat under Pinapaka mandal in Bhadradri-Kothagudem district with a renewed vigour. They also killed another tribal belonging to Cherla branding him as police informer.

The daylight gun battle between the security forces and ultras at Thippapuram outpost under Pameru police station limits in Bijapur district of Chhattisgarh, just a few kilometers away from Cherla mandal, on February 3 in which two apiece on both sides injured further indicates that Maoist agenda is still alive and kicking.