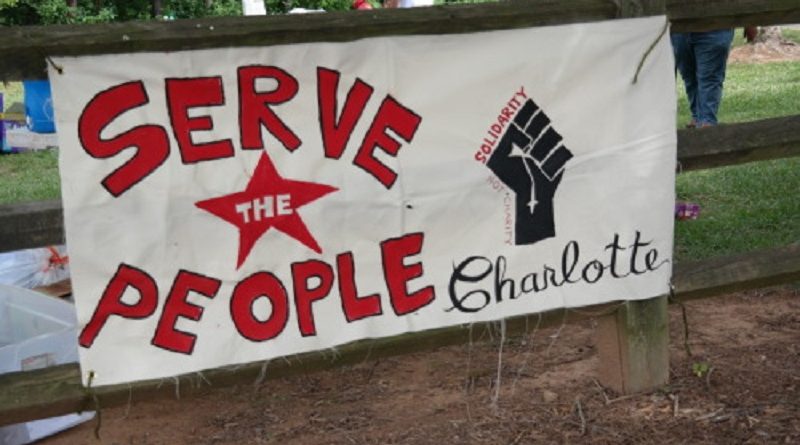 The primary purpose of Serve the People is to build class consciousness of the masses and build for revolution against capitalism. STP does this through meeting the needs of the people, because we cannot build with people unless we are actively struggling with them.

In forming STP-CLT, we conducted a social investigation- class analysis of the city and found that one of the most exploited and over-policed areas was the west side, particularly West Boulevard. In the neighborhoods surrounding the site of STP-CLT’s program, the median household incomes are between the range of $9,000/ year to $40,000/ year. Within this range, most of the neighborhoods’ median incomes fall between the range of $19,000/ year to $30,000/ year (Source 1). This is in comparison to Charlotte’s average median household income of $53,000/ year. The average median income of this area of investigation being about half the average median income of the city helps justify this area as an important site for struggle. Charlotte also ranked in the lowest 10 areas of commerce for economic mobility in the US (Source 2). Hence, in this city most people who are born into the most exploited sections of the masses
remain fighting capitalism at the same rate the rest of their lives. While we do not rely on bourgeois statistics alone, they can be useful in identifying which areas of any given city could be most useful in building with. Primarily, our analysis of the area comes from our practice there, and interactions with the masses there. Many of the jobs available in this area are fast food and other minimum to low wage jobs.

Preliminary canvassing of the area, mostly outside of convenience stores, lead us to draw conclusions based on conversations with the masses there. The primary goal of doing this before starting an STP program was to ask community members what the biggest issues in the neighborhood were so that STP-CLT could be geared toward meeting specific needs. STP volunteers wrote down the topics that came up in conversations. These issues fell into a few categories. These included drug abuse, credit system, landlords, felony charges, gentrification, the need for recreational centers, the need for jobs, grocery stores, transportation, politicians preying on the community, police, domestic violence, things for the children, community gardens/ food programs, things for the elderly, and housing. Of these, we did a tally of those issues that came up most often. Those were: recreational centers, issues concerning the police, transportation, jobs, and food programs. This was a necessary first step in carrying out the mass-line method of organizing (you can read more about the mass-line in STP-CLT’s points of unity here). The next step was to synthesize these most common ideas into a feasible program.

We began to canvas the neighborhood in April 2017 and as we gathered more volunteers, decided to have the first STP-CLT serving in the end of May.

Servings up to this point

The first event was presented as a cookout (hotdogs and other hot food) with diapers that were also handed out. Signs at the serving were propagandized with communist imagery and sayings. Brochures included the points of unity. At this serving, people from different food distributors showed up and also served food. About 200 people came through. This included a couple politicians who had seen the facebook event. They were told that STP-CLT does not endorse or participate in electoral politics. This led to the formation of an STP Points of Unity sign being added to consecutive servings so that this was made clear. One of these politicians was an armed reactionary who concealed his politics and also concealed that he was a candidate for office. This man, Daniel Herrera later posted about the event on facebook in an antagonistic way. We later responded with a poster exposing his reactionary politics and support for Donald Trump, stating that he is not welcome at STP servings where he aims to prey on the people and work against their interests.

There have been three servings within two months with a fourth quickly approaching.

At the second serving, there were smaller numbers of masses which is understandable for a second event. At this serving free clothing was incorporated in addition to diapers and food, which was popularly received. This time, there was also a political program that was incorporated with two STP volunteers speaking in the middle of the serving for about 15 minutes. The first spoke describing the politics of the organization as outlined in the points of unity and why we have to bring down capitalism. The second speaker spoke on oppressed genders under patriarchy and how patriarchy has developed under capitalism. The intention behind doing this was to put revolutionary politics into practice and actively talk to the masses because if we do not talk to the masses about revolution then we become just another charity. After this method we concluded that it was a great start and our comrades both did a great job speaking on behalf of the program, but we wanted to get more community members themselves to speak on the issues they face in this system, under capitalism. Therefore, at the next serving, we pushed an open mic platform and an actual microphone. This was effective in that more community members took the mic and spoke on oppressive systems and whatever they wanted to talk about.

Up to this point, organizing for STP-CLT has fallen into two teams: outreach and logistics. Logistics encompasses acquiring goods for the servings themselves.

After the preliminary round of canvassing, the outreach team started to canvass with the specific intention of inviting the masses to servings while talking about revolutionary politics. The masses must be primary in mass work. The canvassing goal for each serving has been to hand out between 200-400 fliers. Outreach has done this using two methods: door-to-door canvassing of the proletarian neighborhoods surrounding the park where servings are held, as well as handing them out outside convenience stores. Outreach has found that the door-to-door method is more effective for numbers, but the convenience store method is more effective for having longer conversations. STP-CLT’s volunteers also prioritize outreach at the servings themselves.

Conclusions and next steps

This preliminary statement lacks the scope to describe everything surrounding STP-CLT’s inner workings. We are undergoing steps to further centralize the organization. From this point forward we aim to put special emphasis on bringing the advanced masses up into volunteering within STP, as truly serving the people means bringing them into leadership. We have started this process but must follow up with it. We also plan to incorporate community meetings outside of servings into the program, pushing revolutionary politics so that people can take them up for themselves. The tool of mass-line organizing will transform society!