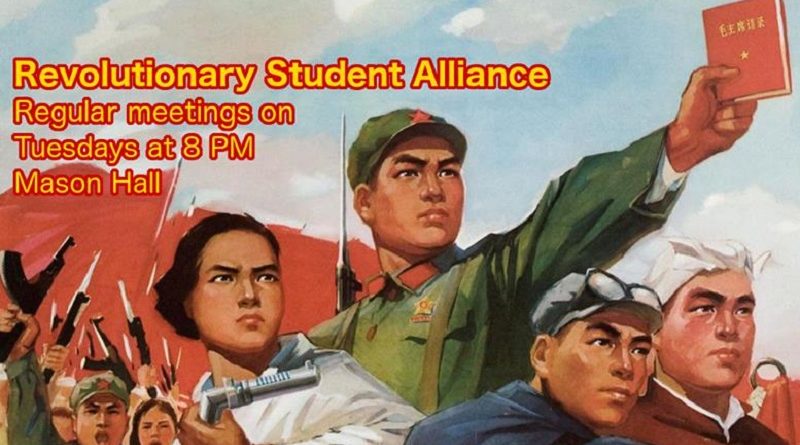 For the sake of transparency, members of the former Ann Arbor chapter of Students for a Democratic Society have drafted and ratified the following message. After much deliberation, we have decided it is in our best interest as organizers to break away from the national SDS organization and become an independent, revolutionary anti-capitalist organization dedicated to political activity and study.

Firstly, we want to break away from the structure of Students for a Democratic Society which limits the organization’s activity to making demands of the University of Michigan administration. While this can be useful, we don’t think it should be the organization’s sole realm of activity. The simple fact of the matter is that we aren’t just fighting for students, but for the USAmerican working class and oppressed nations. Our activity must get out of the stuffy atmosphere of book worship and petty bourgeois ideas in the University so we can immerse ourselves in the masses. We need to analyze our material conditions in the larger community of Ann Arbor. We should care about campus and university issues, but our primary concern is not the “map” that is the University’s insulated world, but the “territory” the University actually occupies.

There are things we can provide for ourselves that the University can’t. Earlier this year, many students expressed concern for their safety following the results of the election. This is something the University can’t provide, because they can only use the police, a violent organization that is antagonistic to the people and squarely on the side of capital. We could work to create a network that could protect students ourselves as students and community members, independent of the University. There’s no demand we could make of the University that would suit this problem we learned about in our social investigation.

Secondly, we believe that real leftist political activity can only be explicitly anti-capitalist. We don’t agree with Students for a Democratic Society’s decision to remain ambiguously “radical.” We need to be open with our politics and loudly declare that our enemy is capitalism and the USAmerican ruling classes. Politics should not just be made clear, they should be at the forefront of all revolutionary activity. A healthy relationship with the masses can only be cultivated through absolute transparency in our activity and our aims. We’re here to serve the people, not lead them astray.

Thirdly, Students for a Democratic Society does not permit theoretical study. This is a serious error. Our actions must be informed by a larger understanding of the system we’re fighting against. We need to be able to understand revolutionary theory and study it together. Avoiding theoretical study because it risks scaring away liberals is useless and opportunistic. We are not interested in hiding theory from the masses, who need a method to analyze their conditions, lift themselves up, and destroy the white supremacist cisheteropatriarchal capitalist-imperialist society that keeps them pinned to the ground, we want to share it with them.

We will also comment briefly on the role of Freedom Road Socialist Organization-Fight Back! (FRSO-FB) in Students for a Democratic Society. This has been a subject of debate within our chapter for some time and we have been quiet on the issue up to this point while doing independent research and making up our minds.

SDS is often called a “front group” for FRSO-FB, which, though not entirely correct, does have some merit. The most active leadership of SDS seem to be FRSO-FB members or have close ties to FRSO-FB. It is impossible to work in SDS without also being influenced by this organization. For several years now, FRSO-FB has been the subject of accusations which have denounced the organization for harboring sexual predators/abusers and silencing critics, as well as lacking transparency on this subject. We have done investigation into this matter. To our knowledge, FRSO-FB has never issued a formal statement explaining the actions of its members or the situation at hand, much to our dismay and concern. We believe this is a serious error. A lack of transparency with the masses is opportunistic at best, and this has strained our trust in FRSO-FB. We disagree very strongly with the way FRSO-FB handled this issue. We also learned that FRSO-FB currently has a member who has received some kind of discipline for multiple instances of predatory behavior—though the precise details are not available to us—and yet this person remains in the organization. Again, this knowledge has strained our trust with FRSO-FB. We think the political activity of FRSO-FB, i.e., planting its membership into unaffiliated organizations in an attempt to guide them, is at best ineffective and we are not convinced their methods, nor their political line, are correct. We have therefore decided that we are no longer interested in working directly with this organization and this has contributed to our split with Students for a Democratic Society. We say this not to be “wreckers” but for the sake of transparency, because the reasoning behind our decisions should be known to the public.

Going forward, we are re-establishing ourselves as an independent, anti-capitalist, anti-reformist, trans feminist, anti-racist and revolutionary organization, guided by communist principles that serve the people in their fight for emancipation from capital. Anyone who agrees with our main principles of revolution and anti-capitalism is welcome to join.

“The world is yours, as well as ours, but in the last analysis, it is yours. You young people, full of vigor and vitality, are in the bloom of life, like the sun at eight or nine in the morning. Our hope is placed on you. The world belongs to you.” — Mao Zedong