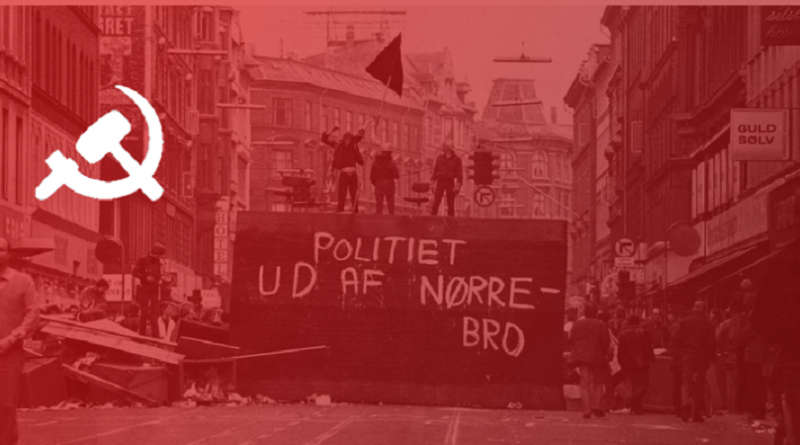 In the last few months, the people of Northwestern Copenhagen have been forced to live under what looks like a state of emergency—pigs everywhere, police helicopters over their heads, soldiers in the streets, unreasonable arrests and searches, and many more abuses from the police. The pigs and their media friends say that this is to protect the people against crime—but that’s a bold-faced lie. It doesn’t at all help against crime in Copenhagen, and does nothing at all besides oppress the city’s populace.

Denmark is a changing country. Since the 1980’s, and especially since the capitalist crisis of 2008, our society has been marked by austerity and a growing proletarianization of the middle class. There has also been a growing amount of discrimination among the masses, where especially Muslims, Romani and Eastern Europeans have been victims of racist oppression. These circumstances have forced many people into the working class, and forces many workers (especially youths and immigrants) into crime. This is the background of the high amount of gang crime in Copenhagen. It also says something important about how crime appears—namely that the police can’t stop it.

This is because it is the bourgeois state that has helped the capitalists destroy the people’s livelihood to such a degree that many oppressed people are forced into crime. The state has created the entire problem, and it can only make it worse. We have to investigate the situation itself, find out who the friends and enemies of the people are, and then we’ll be able to find a common solution.

THE ROOTS OF CRIME

It is true that there has been more crime and a fair amount of shootings in Nørrebro and Nordvest in the last few months, we can’t deny that. But we don’t seek to deny it—we want to investigate the situation concretely, and in that way, find out how the problems can be solved by the community, without asking the capitalist state for help. Here, we will have to start with the root causes of crime, especially gang crime, in order for us to find out why there’s so much of it in Copenhagen.

For a great deal of young people, it’s incredibly difficult to find a proper job. With serious underpayment of young workers (a 17-year old can usually only expect a wage of 60 DKK [1 USD = 6.3 DKK], whereas an adult will get at least 120 DKK for the same work) or in general just capitalists who refuse to hire youths, it becomes very difficult to find work—additionally, it’s a completely legitimate reason to fire somebody because they turn 18 in Denmark. As such, there is no kind of job stability for a young person. There are also many examples of capitalists who outright don’t hire people with “foreign” names, people who have been convicted of a crime, transgender people, women, etc. So we’re talking about a very large degree of discrimination against socially vulnerable groups of people—therefore, it shouldn’t surprise anybody that over 60% of Copenhagen’s criminals have immigrant background! The police also overwhelmingly target oppressed groups of people, and a Muslim or an Eastern European can expect a much harsher punishment or ticket than an ethnic Dane, for example.

That’s why crime represents a realistic way for these people to earn money. We’re talking about a system which outright encourages people to commit crime by not giving them any other opportunities. And there are also other causes—for example, there are a lot of people, especially victims of ageism or racism, who have a deeply rooted hatred of the capitalist, patriarchal, ageist, imperialist society that Denmark is today. This makes them seek alternative ways to survive, ways that don’t involve becoming willing wage slaves for Danish capitalists. In that way, crime could be called a form of “rebellion” against a system that offers no meaning to these people’s lives.

So is crime a good thing? Far from it. People who live off crime (pushers, pimps, etc.) live by leeching on the people. They sell poison to the masses, and they exploit the masses’ despair to an extreme extent. Crime is a big problem—but it’s still just a symptom of the real, systematic issue, and isn’t on its own a systematic issue. And it’s a problem that the system itself can’t solve, not even in a welfare capitalist society like the Danish one. But it’s important to remember that many criminals turned to crime out of a hate of the system—a rebellion—tat can be transformed into revolutionary will.

THE SYSTEM CAN’T SOLVE THE PROBLEM

A system built on the exploitation of the working class can never deal with crime, because crime is a product of this exploitation. All the alienation and discrimination faced by the most oppressed groups in Denmark (immigrants, people with foreign roots, queers, youths, Greenlanders, etc.) gives them no other option than crime. At most, it becomes a choice between crime and welfare, and it should be obvious which of the two offers the most exciting lifestyle. But world history shows us what can happen if people are given meaning to their lives, and if a society without exploitation and discrimination is being built.

In the Soviet Union, back when the country was socialist, crime as it’s known in capitalist Denmark didn’t really exist. Robbery, burglary, gang crime, assault and many other kinds of crime were totally unheard of, and drugs (alcohol included) weren’t a social problem in the same way as in the capitalist countries. Only after the capitalist restoration of 1953-56 did gangs and black markets show up, and alcohol abuse (and the crime that follows drug abuse) and other drug abuse became much worse. In the 1920’s and 30’s, Soviet society handled youth crime (which still existed due to poverty) by gathering the criminal and vulnerable youths in colonies, where education and labor took place. The youths thus served the construction of the new society, their needs were taken care of, their lumpen-proletarian consciousness and worldview was treated through community and solidarity, and the entire problem got taken care of. In that way, a new and crime-free generation was brought up in the USSR.

Under capitalism, the state doesn’t serve the people, but rather the ruling class which lives by exploiting and oppressing the working class. The masses are pushed down by wage slavery, patriarchy, ageism and imperialism, and the pigs’ interference only makes it worse. How is a community helped against crime by exposing its people to violence, searches, arrests, tickets and jail? Does it help the people find jobs? Does it help fight racism and ageism? Does it make rent cheaper or wages higher? No, it makes everything worse, and forces more people into crime!

A great example is drug crime, and a lot of Copenhagen’s gangs are based around the drug trade. Drug crime is only possible because the state banned the drugs in the first place—otherwise, no black market for the drugs would exist. When alcohol was banned in the USA in the 1920’s, an entire mafia arose which profited off the alcohol! Why do people do drugs? They do it to escape from capitalism’s brutal reality, and they wouldn’t get addicted to drugs (alcohol and cannabis included) if they lived comfortable and meaningful lives. Only a socialist society can give people a life where they’ll no longer want to do drugs. We saw this in China, where the Southern areas of the country had up to 90% of the population being addicted to opium. In the 1950’s, there were no more opium addicts. How come? Because the socialist state neither punished addicts nor poor pushers, but rather treated them like victims of the system. People were helped out of addiction by the state, opium stopped being produced (as it wasn’t profitable under socialism) and the big drug capitalists were punished for their crimes. In this way, China was drug- and crime-free until the capitalist restoration in the late 1970’s.

ONLY THE PEOPLE CAN SOLVE THE PROBLEM — THROUGH REVOLUTION

Only the people can solve the problem of crime and police.

The roots of crime can only be dug up through common action against poverty, unemployment and discrimination—and it can only happen in the community through coordinated, revolutionary solidarity work. The masses must be organized in revolutionary organizations to build their own power in the community (and not capitalist power, which is represented by the pigs!) to combat racism, ageism, etc. Capitalism must be driven out of the community, and that will only happen when we build the people’s power, the red power.

Through common action, things can change for the better in the community, and the people who would otherwise get pushed into crime can be helped. The most violent and dangerous criminals can be fought by the people’s own self-defense groups, which we communists will help found and coordinate. Poverty and oppressive ideology can be fought by the mass organizations through campaigns, and the would-be criminals can use their potential for resistance for making revolution. If the people get organized, if the people learn to defend their communities against police and gangs, we can make a revolution—in this manner, we can build communism, a society without exploitation or oppression. We have to create cop-free zones, where nobody calls the police, where the pigs are afraid to step out of their cars, where any attempt to arrest somebody is resisted. This begins by the creation of conflict-solving teams as an alternative to the police, and we start to monitor the actions of the police in the community. Once we have zones where the state’s influence is limited, it will be easier to improve people’s livelihoods, and to carry out actions against the enemies of the people (violent criminals, landlords, principals, capitalists, etc.) when they harm the masses. These cop-free zones can be the embryo of a socialist society.

In Istanbul, the communists organize people to fight against the police and the gangs, and they have succeeded in driving out both of these threats from several neighborhoods there. In the red areas, people live better and safer lives than before, and they cooperate to build their new society. Similarly, communists organize people in the Philippines, India, the rest of Turkey, and elsewhere on Earth—by teaching the people to get organized and to defend themselves, we communists can build the people’s own power and crush the old system. This is revolution, people’s war, and we communists are for it! The communists turn people’s rebellions into revolution by coordinating and strengthening these rebellions—and this is why we need a Communist Party. That is why the Construction Committee exists, this is why we are building the Red Guards, because we want to build the Party that can organize the masses and make this revolution. We’ll build the red power, because it’s the only solution to the system’s problems, both pigs and pushers and anything else that society ruins our lives with.