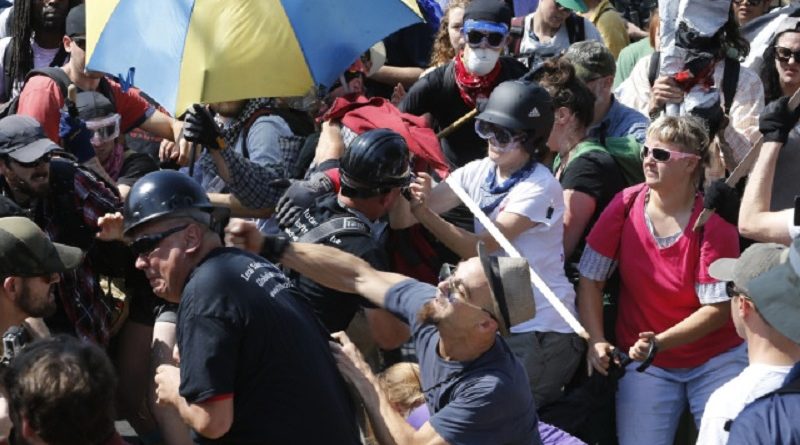 At some point in your life, someone had to explain to you what a Nazi was. Many of us have seen movies and shows depicting a small sliver of what occurred in Nazi Germany. It became a theme to compare everything evil to Hitler. Who hasn’t thought about what they would have done if only they’d been there? The question isn’t hard. When you’ve heard about Nazis and what they did, you know the right course of action. You just never thought, in your whole life, you might be asked to do it. It’s hard to think anyone would ever want to see a country where that might have to be answered. There’s no secret about it at this point, the Nazis are here.

Last week, in Charlottesville, Virginia, Heather Hayer, a participant in an Anti-Fascist rally in response to “Unite the Right”, was run over and slain by a Nazi, who also managed to injure 19 others. Deandre Harris, a Black man, was savagely beaten by nearly a dozen fascists in a parking garage that was all caught on video. These people wear no masks, because they have sympathizers in cars, running into crowds. They have no fears of expressing their far right views because these views are normalized and ingrained in the history of the United States. We are generations of people who have thought about how we would stand up to these monsters if we ever got a chance and here they are. We have more unity in us than they could even imagine but we need more, we need to organize more people.

An entire week of Nazis rallying went unchecked by the police, until antifa got involved. In fact the police had pulled back their forces, allowing the fascists full license to commit violence against a crowd that included the elderly and clergy. Many of those there remarked that the anti-fascists who were there to meet the white supremacists with blows for blows had actually “saved their lives”. While we usually think we can do nothing the truth is we have the power to change this, and we have to use it, because nobody else is going to. This isn’t one City or one stand-alone incident. Time and time again we have proven that when the masses of people unite together they can accomplish anything. They can make the impossible possible!

Not long ago, this June, many of the same group of people that were in Charlottesville, Virginia, were in Kansas City, Missouri. We in Serve the People, witnessed people affiliated with fascist organizations such as the Proud Boys, an organization that was present in Charlottesville, and an organization whose sole purpose is to incite violence and fight leftists. We also saw them come out with militia groups from all across the state, a degenerate movement that also was represented in Charlottesville from III%ers to Oathkeepers. But this sort of mess is not solely limited to just Virginia or Missouri. This is happening all over the country. Fascists and Nazis are gaining audacity and they’re flaunting the license they’ve been given . They have taken the next bold step in a “Unite the Right” rally and are mobilizing in many more cities.

As an organization that is looking to take up struggles of The People we cannot operate under such an existential threat. We also realize we cannot advance current victories that have been achieved under conditions where a right wing backlash is gaining ground in the country and will not stand by while it seeks to make a basehead in Kansas City. This is why we are mobilizing our organization to gather on September 9th at Washington Square Park where they are seeking to use the events that happened on 9/11/2001 to gain a platform for their anti-immigrant, anti-Black, anti-Muslim, anti-Queer and anti-People views. We call on all progressive people to come out with us on this day and shut these reactionaries down.

FIGHT BACK FOR CHARLOTTESVILLE!
NO PASARAN!
THEY WILL NOT PASS!