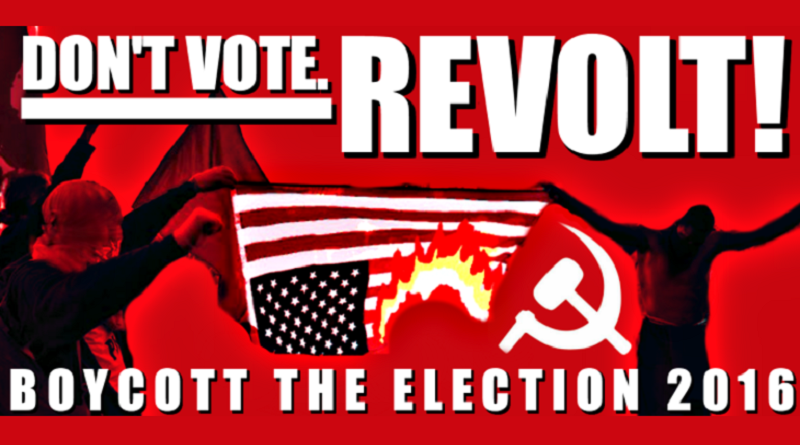 This is the rallying cry of American maoists in the seasonal election circus. “Don’t vote: Revolt!” The Red Guards maoist group propagates this slogan, the graphic and a call to boycott the election which can be read on the Redspark newsblog.

Tjen Folket agrees that the choice between Trump and Clinton is a choice between two extreme evils for the peoples of the world. The goal of the election circus is to crown a figurehead for US-imperialism. Even if just half the people decide to vote, it doesn’t mean these people actually decide US policy.

US politics are determined by the nation’s imperialist interests. There are nuances and differences to be found among candidates and different political parties but the policy pursued remains fixed. We’re talking about the world’s largest economic and military superpower. How it is to be controlled is not left to something as arbitrary as an election, even if the monopolies control who people can choose between through a thoroughly corrupt system of sifting and grooming candidates.

This year’s election is interesting because the Trump wave has continued the reactionary Tea Party’s move to attack the old Republican party. The party is now de facto dissolved as its leadership and democratic organs have lost all control and even people like Bush the elder say they will vote for Clinton.

The election is also interesting because the Sanders wave has loosened up the Democrats a bit – even though the leadership here has managed to keep their house in order. Through corruption and smear campaigns, the Democrats have succeeded in getting Hillary past the primaries. She represents the status quo for the US political system.

Regardless, the war against the world’s poor will continue. The ravages of US-imperialism will continue. Genocide and occupation will continue. And racist internal oppression will continue – even if Clinton poses as an “anti-racist” in the face of Trump’s banal anti-Muslim and anti-Mexican rhetoric. The system kills black people through systemic poverty and repression, dope and crime. It has continued under Obama and will continue regardless of whether Trump or Clinton wins out.

The fascist tendency within Trump’s movement is real. It existed before Trump in the form of things like the Tea Party and supporters of Sara Palin. The strongly racist tendencies and formations that support armed groups along the Mexican border and seek to intern people and flag Muslims is a dangerous movement. It is a populist American fascism that we can recognize from the Ku Klux Klan to America First before World War II and the southern democrats of the 60’s. This movement is dangerous but it cannot be fought by Clinton. It cannot be fought by parliamentary movements á la Sanders. It must be fought in the streets with a militant and popular struggle and organization. There is also a real fascist threat to be found in the traditional support base of Hillary and friends. Imperialist fascism, zionist fascism and the fascism suffered by oppressed nations within US borders are a daily reality for many people, even under Obama and Hillary. A united front with these same forces is meaningless and a betrayal to the world’s poor. As for today they couldn’t care less if some marginalized “left wing” supports them or not. They have Sanders to scoop up any discontents. They couldn’t care less about other so-called leftists.

Most proletarians in the US gave up on the bankrupt political system long ago. The job of communists is to put forward a real alternative to all this decay. Our answer is rebellion and socialism – and furthermore to concretize this in theory and practice. The MLM answer is neither simple nor fully developed. But we do have an alternative. We do not show up empty-handed to the enemy’s circus. This stands in contradistinction to reformist leftists of every stripe. It is not our job to examine reality to the depth in every nook and cranny. We are neither capable not willing to become experts in foreign policy commentary. Our job is to put forward our alternative and win over people so they might help develop it in struggle against the whole rotten system.

In this regard, it is inspiring to witness the rise of new MLM groupings within the US in recent years. They struggle against police brutality, gentrification and fight for the liberation of trans people. They run serve the people programs and develop revolutionary communist theory adapted to local conditions in the largest and most aggressive imperialist state on Earth.