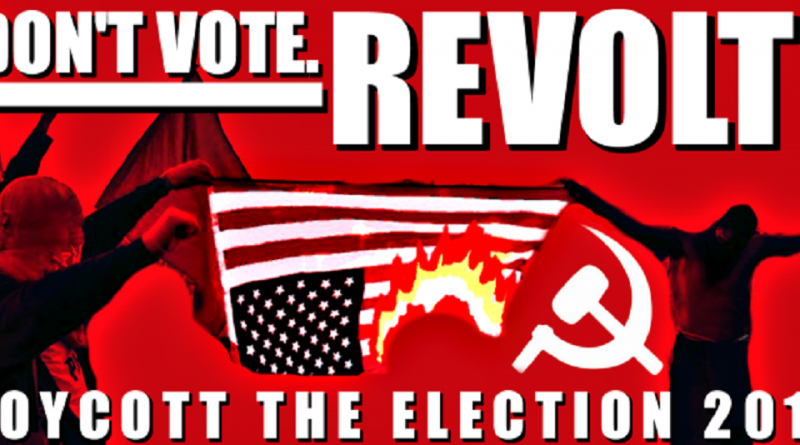 This year we call on all genuine revolutionaries, the masses, and all allied or supportive mass organizations to boycott the November presidential elections. We encourage all progressive community organizers and revolutionary collectives to take part in opposing this election and educating those around them on the true nature of US politics. We encourage all our comrades to promote revolution as the only viable path to freedom from the oppression and exploitation of this capitalist imperialist system, and to no longer sign off on these representatives of the ruling class either by endorsing them or lending them credibility through the vote. This year’s election and every other US presidential election is a sham, a spectacle that is designed only to offer the illusion of political agency. Talk to people at your work, at school, at the bus stop, and in the streets about the hard reality that we workers have no real representation in this system. Talk about how democracy does not mean checking a box once every four years; it means unified action by the people to express their real concerns and assert their power in the form of rebellion and revolution. Organize educational or cultural events around the boycott and promote it in the form of posters in your area. For those working class people who still feel compelled to take part in voting, we challenge you to not stop there, to take to the streets with us and use every possible means to enact and assert change that goes far beyond the polling stations. Real power is in revolt, not the ballot box.

There has never been such a clear indication of the sham politics of bourgeois democracy as this year’s presidential election, where we get to choose either a proven war criminal or a crooked slum lord who relies on fascist and reactionary populism. In between them is a sea of liberalism which would shame the average worker for not taking part in such a spectacle. The US presidential election has shaped up to be as dramatic and shallow as a televised wrestling match between two representatives of the ruling class, only far less entertaining. While many will participate in the theatrics by putting forward their best hopeless candidate, exhausting resources and volunteer time to get you to vote for a “socialist,” we call this what it is—a waste of time. We have zero interest in offering even the most marginal amount of legitimacy to something as illegitimate as US elections, a circus where the bourgeois ruling class capitalists pretend to let us choose which of their representatives gets to head up the criminal empire that exploits workers domestically and kills them in drone strikes overseas, all in our name. The joke is on us and we will never take part in such a bullshit system. Why choose “the lesser of two evils” when the only decent choice is to fight for a better world?

During the 2012 elections, about 240 million Americans were of voting age, while about 146 million were actually registered. Of those registered, 17 million people did not go to the polls. 39% of people know that registering to vote is a waste of time, and only 53% of people actually vote. We are constantly told that we live in the greatest democracy in the world, and that voting is the pinnacle of this democratic achievement, yet the numbers show that it’s nearly a 50/50 split among the population between seeing through the sham of US bourgeois politics on the one hand, and dragging oneself out to the polls to exercise this “historic opportunity” before heading back to work and the unchanging grind of exploitation on the other. Even considering the massive propaganda machine that the state deploys to shame, guilt and motivate people to vote, 111 million voting age people do not, and people making less than $20,000 a year have the lowest voting rates of anyone.

Some people will tell us that if we do not vote then we cannot complain. We say the opposite—since we have no one to vote for who actually represents the people, all we can do is rebel against this system. By not voting, we are protesting and refusing to be complicit in the crimes that both of these two candidates would be certain to commit as president, and we denounce the crimes they have already committed so far. Even the most “radical” president would still be confined to the limitations and activity approved by the ruling elite. Without totally smashing the existing ruling class and its state we will not see thorough revolutionary change, and it is high time we stopped buying the snake oil hocked by these criminal politicians. We must cast aside all illusions and prepare for struggle.

Many workers already see through the sham of US elections. When we speak to them, they tell us the many reasons why they see no point in voting. Others from both the left and right would misidentify and criticize this stance as lazy or apathetic. In reality, the working class knows in its heart that these cosmetic questions of who will be the next president do not address the real issues they face as a class. This is a correct idea and it must be seen as an advanced form of class awareness.

The purpose of this boycott is to highlight the limitations of participating in this bogus system, while agitating for revolution as the only solution. We must utilize everything at our disposal make information pamphlets, posters, and fliers which can be spread widely both in the streets and online, uniting all who can be united around the spreading of revolutionary ideas in opposition to the reformist and defeatist ideas, mobilizing the masses in the interest of ending capitalism. We must build in the interest of revolution!

Revolution requires a full ideological break with capitalist “democracy” and their bourgeois elections. When revisionists call on the masses to vote for a bourgeois candidate or one of their hopeless “socialists,” they are actually refusing to break with the ideology of bourgeois “democracy,” which can only perpetuate it. This amounts to pathetic and cynical distrust for revolution, a lack of faith in the ability of the masses to resist such a system, and confusion on who actually constitutes the advanced within our society. They attempt to drag the masses of workers and oppressed nations people back into the bourgeois system—a system we already see as pointless to participate in, and one the masses have largely abandoned. Organizing people to boycott the elections allows real revolutionaries to consolidate those who can already identify the toxic nature of the US electoral machine, instead of pulling them backward into a system we can all see as undemocratic. We must draw firm lines between those who are part of the system and those who organize to dismantle and destroy capitalism.

Time and time again we are fed promises from these ruling class puppets it is high time we stopped listening and started acting! We call for a day of action on November 8th as soon as the polls open; a day where we can make our voices heard and let others know why it is that we will not be voting!

Down with the elections
Fuck voting for a ruling class vulture
Build for revolution in 2016!