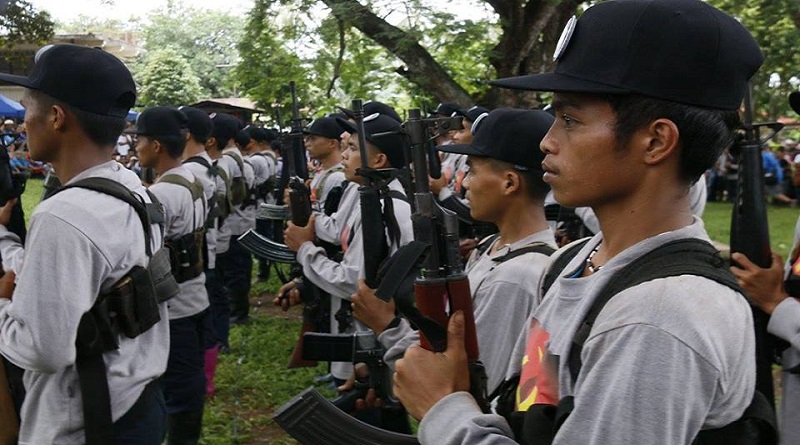 (In the battle of people’s hearts and minds)

The method is no other than the dismantling or complete overhaul of the whole system through force. There is a natural and dialectical base for this. No qualitative change could take effect without force nor violence. Take for instance an egg. The breaking, i.e. force, of the shell signals the quantitative change of an egg to qualitative change, into a chick; the leap to vaporal state of the water is effected by boiling, i.e. force, through fire; the birth of a child comes through force exerted by the writhing of the mother immersed in blood and water.

Peaceful means through reactionary elections and parliamentary methods cannot effect meaningful change because whoever has the golds, guns and goons is sure to win through vote buying or cheating. Results are also padded and fabricated. Thus results in reactionary elections do not reflect the true sentiment of the people. Besides, Congress is dominated by big landlords and compradors whose interests they would attend first in their legislations. As the saying goes, “What is food for the chicken is not victuals for the coyote.”

A revolution is progressive and constructive. It is creative and not destructive. Although at first it is necessary to destroy the old to be able to create a new set up. History has shown that almost all countries that have now attained high level of industrial development had undergone revolutions in their society by destroying the old set up before attaining what they are today.

The United States had undergone two revolutions: one against colonialist Britain and one against the slave-owning South America. In the first, they destroyed colonialism and created an independent America. Then afterwards, in the second (in 1860s) they destroyed slavery and created a society free of slaves. Great Britain has undergone revolution too, widely known as the Puritan Revolution or the English Revolution from 1640 to 1660. Similarly, France in 1789 and Germany starting in 1525 had their own wars with the revolts of the Peasants and the end of the the Thirty Years’ War (1618-1648). Same as with Japan, following centuries of civil war, in the Edo period (the place where the Bakufu or military government fortified its headquarters widely known as Shogunate) has brought more than 250 years of peace, prosperity, and progress to their country.

Russia, after the victory of the 1917 October Revolution, arose into superpower status. China also, after the victory of Chinese Revolution, is now industrialized and is even extending aid and investments to the Government of the Republic of the Philippines (GRP). North Korea, as witnessed by Discovery Channel in their coverage of the North Korean Mass Games in 2005 and in the 2017 commemoration of the death anniversary of Kim IL Sung, is very prosperous and highly disciplined contrary to the news feed by the CIA and other US mass media. But the success of Cuba in Health Care, Disaster Preparedness and Education could not be surpassed not even by the United States. Cuba is on the top of the whole world in these fields. And this is socialist Cuba!

Same thing with our country. Unless the GRP would do away with its puppetry from US diktats, the country could not extricate itself from this economic quicksand. Carrying out national industrialization and with agriculture as its base, although toddling at first as we encounter hardships and difficulties, is only temporary in nature. In the long run, as we persist and persevere, we will ultimately achieve prosperity and we will not be a toddler anymore. We then can fully stand on our own without external interference. Look at Venezuela, Bolivia and other Latin American countries who chose to veer away from the US imperialism’s stranglehold. Now, Venezuela and Bolivia nationalized all exploitative foreign-owned companies. The tumultuous clamor now happening in said countries are instigated by the CIA to effect regime change (similar to what happened in Chile and Indonesia in the 70s) that they can tow by the nose.

In the battle of hearts and minds of the people, the NPA together with the masses in the countrysides are working hand-in-hand to alleviate poverty, giving them guidance, encouraging them and if condition permits, even partakes in mutual aid teams – a form of simple cooperation. The NPA also organizes them so farm wages and their farm produce could be raised. They do not “give them fish,” for the NPA have none but they taught them how to catch fish by leading and guiding them in building fishponds so they can eat fish all of their lives. They taught them how to read and write. Thus an NPA organizer could be an engineer, a teacher, a doctor, a nurse, a lawyer, radio technician, all rolled into one. He is not alien to them but considers him as part of the community ready to help them when problems arise ranging from petty family quarrels to thefts, gambling, drug problems and many others.

On the other hand the AFP–PNP–CAFGU is fighting a counterrevolutionary unjust war with its campaign plan dubbed Oplan Bayanihan and now Oplan Kapayapaan (Development Support and Security Plan) characterized by widespread killings of progressive leaders, journalists and political opposition and also “Tokhang or Tokbang” to suspected drug users and drug lords. It is counterrevolutionary because it opposes change. It is unjust because it defends and preserves the status quo ruled by big landlords and compradors—- the super-rich in our society. It is destructive because it creates culture of fear and destroys whatever the masses and the revolutionary movement have built on for so many years of painstaking hard work in the countrysides. The AFP is therefore defending the interest of the ruling elite – their huge plantations, haciendas and capitalist enterprises. Thus, they are very far from the hearts and minds of the people. And worst, these AFP–PNP troops are the ones promoting gambling, drug use and trafficking, robbery and thievery, coveting wives of their men and many more vices in places where there are army detachments.

But the masses won’t believe in them. If there are those who they can bait, are those people who too are inclined to do wrong and evil deeds and hate the presence of the NPA. It is these people who easily got recruited as informers and assets of the reactionary troops in exchange for some privileges and amenities. Others out of fear are only taking them lightheartedly in silence and meekly follow whatever order the military imposed.

To mislead and deceive the masses, our class enemies and their armed machinery, the AFP–PNP resorted to black propaganda demeaning the People’s Court of the Revolutionary People’s Democratic Government as “Kangaroo Court.” But if there is such a “Kangaroo court” it is none other than the reactionary courts. Many innocents have been imprisoned because they are poor and do not have the means to pursue their case while their adversary has the money and influence to circumvent the truth. Hukumang Bayan or People’s Court is the exact opposite of reactionary courts. It does not require filing fees in order for a case to be heard. Thus, there is no such thing as “witnesses who may or may not be telling the truth.” Circumventing the truth has no place in a revolutionary people’s government and a hundred heads in the mass organization, the Pambansang Katipunan ng mga Magbubukid or PKM as witnesses or judges cannot be wrong in arriving at the truth.

Thus, in their countless “pulong-pulongs” in the countrysides, many they declared have “surrendered and have returned to the folds of the law.” But deep inside their hearts and minds are the longings that these army detachments would be gone. This is the easy explanation why army detachments and municipal police stations got so easily raided by the NPA even without a single shot fired. It is because the NPAs are still harboring the people’s support.

In general, the masses detest and fear the presence of the army troopers for they feel it is not their army. They feel the AFP is the army of the ruling class, the rich and the super-rich who are out there in the countrysides to impose their will on them often victimizing innocent civilians in their counterinsurgency operations. Subjecting civilans to population and resource control only reinforces their sufferings too. Imagine, limiting barrio residents to their places of work and their rations; hiking far distances in the early morning to their farms from their hamletted position in barrio centers and return to the barrio at 4:00 pm. These, plus the vices mentioned above perpetrated by their supposed “protector” are the reasons why the AFP’s battle for the people’s hearts and minds will surely fail. Other reasons are history and experience. This has already been put into practice by the US military and the Army of the Republic of Vietnam (ARVN) in Vietnam. And it only ended in their utter failure and defeat.