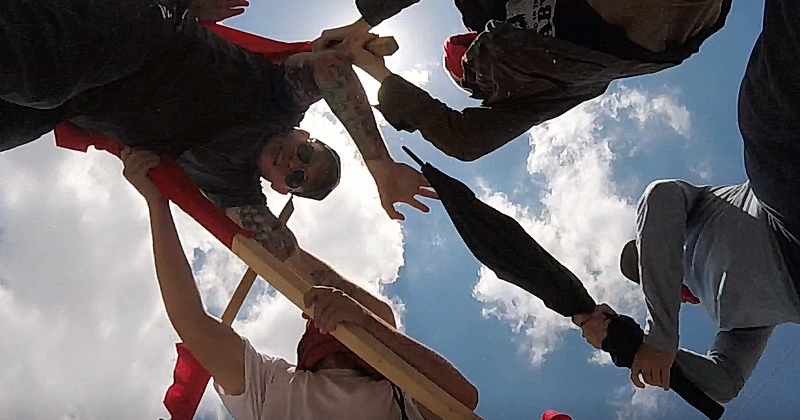 On July 2, 2017, the far right and assorted fascists tried to bully and intimidate a large group of liberal Democrats who were participating in an “Impeach Trump” rally. It is not appropriate to think of the antagonists as fringe elements: fascism has been a steadily growing popular movement in the US, and Texas is no exception. However, there is unstable unity at best in the enemy camp. The popular fascist movement is rife with contradictions, not only ideological contradictions but also tactical and strategic contradictions.

It is crucial to understand that the far right relies on having a common enemy to unite around since there can be no unity among their varying programs and agendas. Every public action they take demonstrates this fact and shows off their own instability. They hoped to find this common enemy in the form of “antifa” and “red guard” [sic]. Fascist organizers are so desperate to conjure this enemy that they resort in many instances to false flag events and phony “antifa” pages that promise the bullheaded participants an enemy to confront. This tactic seldom pays off, and many are discouraged to be denied their promised glimpse at “antifa.” This slightly humorous scenario has played out all over the country, most notably in Houston around the Sam Houston monument and in Gettysburg, VA, where a fascist who came to fight “antifa” accidentally shot himself with a faulty revolver that he triggered with a flag pole. They attempted the same thing here in Austin on July 1. They used a fake antifascist page with the name “antifa USA” to bait antifascists to their rally—it did not work. Upon finding no “antifa” and no Red Guards Austin, they began accusing everyone from the Clintonites to the APD of being a “communist.” As funny as this sounds, what is exposed in their thinking is a more serious danger—and it is a harbinger of what life under growing fascist terror will resemble.

These events also expose a particular weakness inherited from the anarchist adoption of the name Antifascist Action. The original Antifascist Action was a far cry from the decentralized and largely depoliticized anarchist model of leaderless resistance. Antifascist Action and many of its variations were paramilitary street-fighting units with a relatively good level of discipline, sharing both strategy and long- and short-term goals. It was deeply connected to the German Communist Party, which controlled the proletarian slums and neighborhoods  in pre-fascist Germany. Then too it came into sharp contradictions with social democracy and the liberal so-called left; these contradictions were often violent. We must understand that with its decentralized and low level of action, faulty communications networks, and completely voluntarist approach to work, it will continue being easy for anyone to call themselves “antifa” and call for actions that are not only risky and foolish but outright disadvantageous to the point of promising an enemy victory. In spite of the fascists’ claims, they were robbed of this victory in Austin—their honeypot was smelled for the trash heap that it was and everyone on the local level knew already that the calls to action from “antifa USA” were made by people outside of Austin who have no clue on what is going on in our city. No one was fooled and no “antifa” took the bait.

Still, to correct these errors we must seek a higher level of organizing antifascist resistance. We must study and apply military strategy when confronting the enemy, and we must not give the enemy any easy victories. Sometime this means being maneuverable and elusive and confronting them one by one, bite by bite, until they are eradicated. We study Mao on this question: even the US military finds it crucial to study his works on asymmetric warfare—it would seem the only ones not studying Mao are the common fascists. In the long term this contradiction will be solved with the creation of the Communist Party, which will lead the proletariat in all aspects of struggle, including the struggles against fascism. Today such a party would be necessarily guided by Marxism-Leninism-Maoism.

Why were communists not on the front lines defending the liberal march?

For starters we were not asked to defend them; we have no basis for unity with Democrats. The Democratic Party, which led the country for the past two presidential terms, and, true to its whole history, faithfully represents the bourgeois class. Obama was our enemy as we raged in the streets over the continued murders of black people by the police, and Hillary Clinton has been implicated in countless war crimes and is as dirty as they come—and we make little distinction between her and Trump politically. What the Democrats have given us is worsening conditions and imperialist crisis, which creates the fertile ground for fascism. While the system remains intact, we see very little to no use in impeachment campaigns, as whatever pig this system chooses for president still represents US imperialism and the monopoly class of capitalists at the top. Impeachment is simply not a communist demand, as it allows the state to go on with its bloodthirsty, genocidal activity without so much as skipping a beat. What we fight for is the smashing of the old state and its replacement with a new proletarian state.

More than anything else though, the contradiction between the fascists/far right and the liberal Democrats shows the faulty logic of the fascists’ reasoning as much as it shows the futile death throes of the Democratic Party, whose mass base is becoming more and more disillusioned with it. The dominant narrative among fascists in the US is one of “free speech” and First Amendment rights. They declare that because their hate speech is technically protected it should be accepted with no resistance and no consequence. These fascists of course did not care that the right to call for an impeachment is also protected free speech, as they chose to try to surround a number of Democrats. What the fascists detest is any sort of freedom for anyone outside of their preferred national interests. Fascism itself is the promise that democratic rights of all types are on the way out—especially for the working classes and particularly for oppressed sections of those classes. But the liberals’ faith was shaken. They insist that the police be worked with—the same police who time and time again not only defend but give physical assistance to fascist violence in Austin. The liberal Democrats paint both neo-Nazis and communists with the same brush. They are as guilty as the right of spreading rumors and disinformation about the masked bogeyman “antifa.”

On July 2 in Austin, many liberals for the first time (through the blinders of their own middle-class upbringing) came that much closer to understanding the purpose and necessity of antifascism. They begin to notice that Trump himself is not the biggest issue—fascism is. In this process many of them will bury their heads in the sand and forget what they witnessed firsthand in regard to the police/fascist collaboration. Others will begin to understand the purpose and necessity of antifascism, of organizing strong and militarized forces capable of defending the people, of pinning the fascists down and upon either violence or the threat of violence forcing them out. The fascists themselves as well as the current administration will be a recruitment force for the communist movement polarizing society and driving many to the far left. In the future under conditions of war they will be this movement’s supply line for weapons and equipment, which will be captured in battle.

The fascists have been unpacking a very old strategy whether or not they are themselves cognizant of this. In the years before Hitler came to power the Nazi party attacked left-leaning cities in Germany, focusing on proletarian neighborhoods in an effort to soften the hard communist influence. The Nazis understood how to manipulate and use the social democrats, who were the ruling party at the time, to their advantage. They also knew that the threat posed by their opposite (the Communist Party) was a significant one that could block their attempts at gaining state power. Now, just as then, the fascists target and focus on what they understand to be left centers: Austin, Berkeley, Portland, Seattle, and the list goes on. We should understand every street as a battleground, every place of social gathering as a site of struggle; we should understand that the solutions to this system will not grow within its institutions. We should give them no quarter in our workplaces and schools, and we should apply antifascism creatively and widely in ways that benefit the people. Antifascism must speak to the needs of the people—if it does not accomplish this, the fascist will be allowed to trick and deceive to push their poison on desperate communities. We should understand that the lack of solutions from either the Democrats or social democrats is precisely what made some people desperate enough to see a solution in Donald Trump, whose election victory blew wind into the sails of fascism.

We call on all those who struggle in the state of Texas to get organized, to cast aside illusions of a leaderless resistance—a pipe dream of an Occupy Wall Street type of antifascism—in favor of a genuine mass-based antifascist resistance organized along militant lines. We call on you to see the current struggles against fascism as warfare. We must institute people’s self-defense committees against fascism. We must learn to defend ourselves: to shoot and to fight. We must be better in all respects than the enemy, not only in ideological principle but in our physical abilities, in our courage, and in our perseverance. The battle for the streets has already commenced, and the least safe place is on the sidelines when there is no one left to defend you from the threat inherent in fascism’s rise. In these struggles we will build our party and we will win.