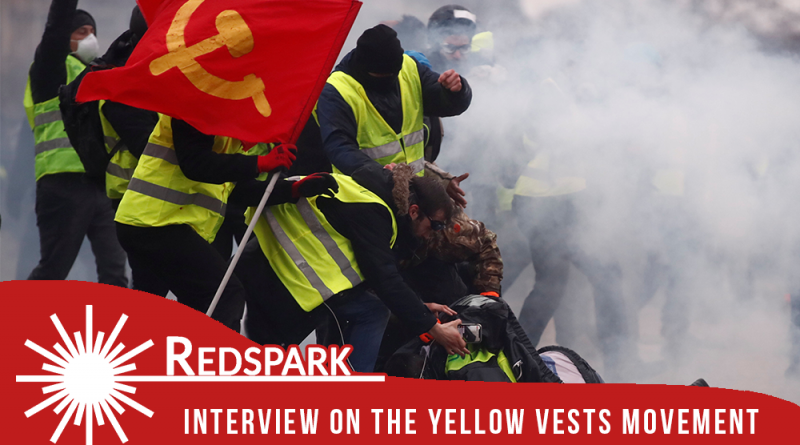 For this second interview of our new series, a french comrade, a member of Jeunes Révolutionnaires and one of the editors of La Cause du Peuple, discusses the current situation of the Yellow Vests Movement.

Redspark: What is the current status of the Yellow Vests movement?

Firstly, the media has been saying that the movement is dying down for months now, even as early as December when the movement was at its peak.
After six months of struggle though, it is true to say that the first forms of the movement, especially the large demonstrations, are withering away, especially in the last two months.

Secondly, this change does not mean that the problems that led to the Yellow Vests movement have been solved. On the contrary, nothing has been addressed by the government or its other bourgeois opponents, and the masses’ general level of anger with the status quo is high. Prices keep rising, wages are frozen, unemployment is still very high and the country is generally in crisis. This incapacity of the bourgeois government to handle the crisis has led to a surge in its use of force to deal with anybody who revolts. For example during the second month of the movement, 80,000 police were deployed in the streets, an enormous number compared to previous movements. The State was so threatened that it even paved the way for the use of patrolling army forces against the Yellow Vests. The fact that the army was deployed in the metropolis and that police forces were sent to the colonies, like La Réunion, to maintain order, shows a level of repression that had not yet been seen in the 21st century and which echoes decades of struggle after World War II. The current situation is like this: whether you talk to people involved before November 17th (the starting point of the movement), on roundabouts in December (roundabouts are where the Yellow Vests started their movement, blocking the intersections with their cars and erecting shacks to hold assemblies), in demos in January, in local assemblies in February or just now after six months – nobody will tell you that their demands have been satisfied. This means that there is an enormous mass of people who have risen again and are now looking for tools to actually meet their demands.

Redspark: What is your analysis of what brought the movement to its current status?

The movement has known several situations, which have led it to its current status.

On the one hand, there are internal contradictions to the movement, such as the fact that it started as a blend of different class forces: proletarians and workers, of course, but also, to cite an extreme counter-example, owners of truck transport monopolies. After a few weeks, the most bourgeois elements bailed out for different reasons: the capitalists got a cut in their taxes by the government after a week and ceased to support the movement; the conservative right became a staunch opponent to the movement after the beginning of violent actions and demonstrations; the rural petit bourgeoisie who were interested in the movement were uninterested in prolonged struggle. At that point, the movement started to use tactics and actions that truly showed that it came from the masses: taking down the barriers for toll collection on highways, strikes, blockades of oil dispensers local assemblies and so on. But keeping these actions alive for a prolonged struggle requires an organizational structure, which was done in some cases locally, but never more broadly. This led to dispersion and a loss of momentum and interest by local protesters.

Another contradiction is the division on the question of the vote: several of the “first” Yellow Vests (or so they say) were interviewed by the media and picked to meet the government to discuss a “way out.” Some of those who did started to try to direct the movement towards electoralism, with the upcoming European Elections in May. This was a failure, since the large number of “Yellow Vest” candidates garnered less than 1% of the votes. The level of media attention that was given to “party politics” as a way out of the Yellow Vest crisis to try to influence the fate of the movement backfired. It was no surprise that in the national Yellow Vest assembly in Saint-Nazaire a few months ago, the Yellow Vests decided it was important to abstain from supporting anybody in the elections, underlining that their demands need to be met regardless of the electoral results.

On the other hand, there are problems in the movement which come from the outside. The first and most evident one is the level of repression, which has escalated dramatically with several thousands injured, more than a hundred severely injured, and more than a dozen people killed since the beginning of the movement. The results of this were two-fold: first the movement became more radical once the State used violence and repression, and the vast majority of those who were arrested and tried for having taken part in the movement were usually workers and proletarians with no previous political affiliations. However, becoming active in the movement became more dangerous as the State did not hesitate to use police to destroy people’s shacks on the roundabouts, or to throw tear gas and beat up elderly protesters in the street, arresting by people by the thousands (sometimes arresting more people than the numbers they claimed had participated in demos!). This high level of repression, both physically (police brutality and use of arms, which have led to death or grave injuries) and judicially (trials by the thousands resulting in many prison sentences) had a huge impact on the movement. Locally, people still struggle against this situation: if you take the example of Teo and Tristan, two protesters tried and imprisoned for their activism in the Yellow Vests, the local support committee for them has received the support of the masses (Yellow Vests or not) in demonstrations time and time again, such as the May 1st demonstration or at other gatherings.

Redspark: To what extent has the Far Right been able to utilize the movement to grow their forces in popularity and numbers? How does this compare to the Left?

About the Far Right and the movement, it is important to understand two different things:

First: the mass movement and the street-fascist groups. From the beginning these groups have tried to infiltrate the movement, some going as far as to spread the idea that it was a revolt against “globalism.” Of course none of that held truth in the real world, like on the roundabouts where people were talking about their daily lives and struggles, and not about some giant fascist conspiracy. Still, these groups tried to lead local gatherings and to be accepted as part of the movement. This resulted in failure, since on several occasions, be it locally or on a regional level, Yellow Vest assemblies took a clear stance to exclude these groups from the movement. The last straw was when these fascists disguised in yellow vests tried to attack Yellow Vests in Paris and Lyon, which only led to them to being beaten up and pushed back by the masses and anti-fascist militants.

This leads to the present situation: the rise of fascism must be countered by the organization of the masses in larger numbers to show that the true alternative is revolution. This is especially important because ever since the start of the Yellow Vest movement, the debates have focused on topics that are tied to all the masses and to the working class like the cost of living and wage levels, and not the traditional fascist-leaning topics. Showing the people that the fascists do not want to solve these issues (because they profit from them) is now possible and necessary.

Redspark: What needs to change in order for the Left to effectively provide leadership at the advent of such popular movements in the future?

First, if we talk about the “Left” in general terms, this movement has shown, just as the 2005 Revolt of the Banlieues did that it is incapable of leading a mass movement. The hesitation in social-democratic and revisionist organizations was such that they often waited a full month before pledging their support to a movement and joining it. This was shameful, and only a handful of organizations, including Jeunes Révolutionnaires and many local trade unions, had some presence on the ground with the Yellow Vests from the start.

But this movement marks a deep change: there will be a “before” and an “after” Yellow Vests. To quote a comrade: “The dead, the injured, the imprisoned, those who have been beaten up, who have lost their jobs, but also all of those who have raised their heads, the youth who threw rocks at the cops, the workers who saw fear in the eyes of their boss or the BAC (Anti-criminality Brigade, one of the most brutal police forces) flee in the face of an angry mass of people, the women who have led the struggle… they won’t forget! And with their families, workmates, neighbors, friends, it amounts to a crazy number of people.”

This movement represents something new. In quantity, it involved a very large number of people, spread over the whole French territory. It was particularly active in some of the colonies, like La Réunion, which was at the forefront of the struggle. The level of mass support reached more than 70% in the early months. Now, this movement also shows a qualitative change: large amounts of people are left unorganized, but their consciousness has been lifted in the struggle. Now this raised consciousness must be channeled into revolutionary organizing to avoid a loss in interest or fascist infiltration.

The role of revolutionaries in the current situation is to take up the task left by the mass movement: to go to the masses who have revolted, especially in local rallying points on the roundabouts or in public spaces, and push forward agitation, education and organization to the large numbers of people who have finally raised their heads in this `movement and who are determined not to lower it again. If we want the masses to organize for revolution, then we should not be spectators – we should not be commentators, but rather actors at the forefront who go to the people and make plain our perspectives and analysis.