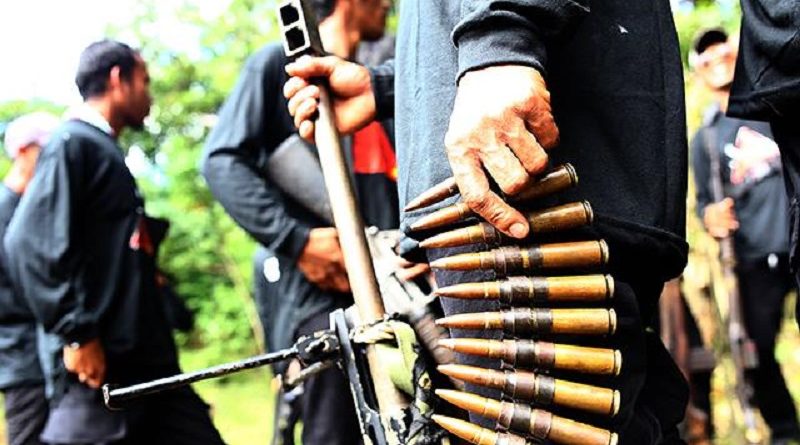 The Rodante Urtal Command (RUC) of the New People’s Army in Northern Samar today announced the successful raid of a detachment of the Alpha Company, 63rd Infantry Battalion-Philippine Army in Lao-ang last May 21, where three Army troops were killed including two corporals, while several rifles were confiscated. “This is a slap in the face of Maj. Gen. Raul Farnacio of the 8th Infantry Division-PA who boasted of redeploying the fascist 63rd IB from their terrorist siege of Marawi to Northern Samar only to serve as security force for a corruption-ridden road project under the Duterte regime,” said Ka Amado Pesante, spokesperson for the NPA-RUC.

Red fighters of the RUC strategically used command-detonated explosives and fire maneuver tactics to defeat one squad of enemy troops during 30 minutes of firefight in Little Lanubi, Brgy. Lanubi, in Lao-ang at around 4 in the morning, resulting to the death of Cpl. Alix Saliwan, Cpl. Mark Andrew Abunda and PFC Domingo. They likewise confiscated three R4 rifles, one super 38 caliber pistol, 26 magazines and 382 bullets for M4 rifles, one Harris radio, a pair of night vision goggles, military telescopes, cellphones and other important military equipment.

According to Pesante, the tactical offensive is in response to the people’s clamor after the latest slew of blood debts incurred by units under the 8th ID. “The 20th IB led by Lt. Daniel Salvador Sumawang is responsible for the killing of San Miguel barangay captain Apolinario ‘Kap Pening’ Lebico and the frustrated killing of his son-in-law, as well as the indiscriminate strafing of civilians in Sityo Inuman, Brgy. Tagab-iran, killing resident Melvin Obiado Cabe and seriously wounding his underage child.”

The RUC spokesperson condemned the military for turning to civilians to seek vengeance for their heavy losses, after their hot pursuit operation against the retreating Red fighters failed. “Residents reported that 20th IB soldiers fired a 105 Howitzer towards their barangay, and threatened and terrorized them after the clash.”

Pesante also exposed the lame cover-up by Gen. Ramil Bitong of the 803rd Brigade through fake news of “extortion” by the NPA on construction projects of the Duterte regime such as the Simora-Palapag road. “Meanwhile, Gen. Bitong and other high-ranking military and local government officials collude to rake in corruption money from such infrastructure projects, and to excuse their militarization of the countryside through the so-called ‘whole-of-nation approach’ of the US-Duterte regime.”

The RUC likewise gives the highest salute to Ka Yulo/Lysan, farmer-youth and provincial cadre, who selflessly gave his life for the victory of the tactical offensive and for the cause of the national-democratic revolution. “From his years as a local youth organizer to his service as a Red commander until his death, his example inspired both young and old revolutionaries to do their best in the work. In his memory, the RUC vows to carry forward the people’s war, achieve victory for the Filipino people and attain national and social liberation,” Pesante ended.