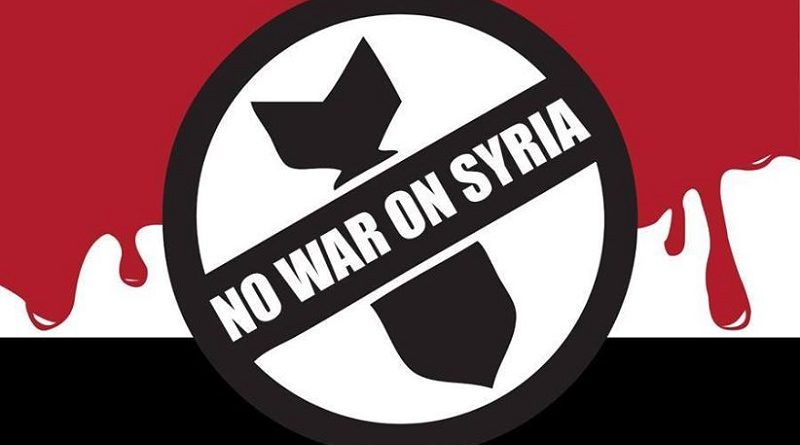 The International League of Peoples’ Struggle (ILPS) strongly condemns the missile attack launched by the US against a Syrian airbase based on the lie that Syria used chemical weapons to attack ISIS positions in Idlib. This action is a gross and grievous war crime, an act of aggression against a sovereign nation without any justification whatsoever.

The Shayrat airbase that was attacked with dozens of Tomahawk missiles launched from a US ship based in the Mediterranean Sea is being heavily used by Syria in fighting ISIS and Al Nusra. According to the governor of Homs province, the US missile attack was actually seized as an opportunity by ISIS to launch attempts at retaking control over rich oil fields near Palmyra which had earlier been liberated from the terrorists by the Syrian Arab Army (SAA).

Without showing any shred of evidence, US ambassador to the UN Nikki Haley, condemned the Syrian government for allegedly using chemical weapons in Idlib and justified the US unilateral action. And in a fit of overweening arrogance, she warned that if the UN did not act according to US caprices the US was fully prepared to take matters into its own hands and undertake more unilateral action.

In another show as to what length they have morally degraded themselves, western “leaders” from the United Kingdom, France and Germany joined in another shameless chorus echoing the American line. They endorse, support and assist the US in unleashing wars and devastation of lives and property in the Middle East and North Africa. But they refuse to receive millions of refugees displaced by the wars.

The Syrian government and Russia have already explained what actually happened in Idlib. A Syrian airstrike had hit a building that was storing chemical weapons that are being used by the terrorists in the war. If indeed there were civilian casualties from the airstrike, it would have come about from the release of toxic gases from the chemical weapons hit by the airstrike. But guilt must be squarely put on the terrorists for producing and storing such weapons and not on the Syrian Government.

When Aleppo was liberated from Al Nusra and other western-backed terrorists, the Syrian Arab Army (SAA) and Kurdish fighters fighting alongside the SAA came upon a warehouse where chemical weapons were being manufactured and stored.

It was proven in 2013, that the US-NATO backed terrorists are not only capable of producing chemical weapons but they had actually used them repeatedly in Syria and Iraq. UN officials have confirmed that Al-Qaeda terrorists were responsible for the sarin gas attack in Ghouta which was prematurely blamed on Assad by the same countries now joining in a chorus blaming Assad and now calling for his ouster through escalation of foreign intervention and ouright aggression by the US against Syria as a sovereign state.

In 2014, it was proven that the terrorists were being supplied such chemical weapons by Saudi Arabia and Turkey. On the other hand, the Organization for the Prohibition of Chemical Weapons (OPCW) confirmed in 2016 that all Syrian government chemical weapons had been destroyed under their supervision upon Assad’s affirmation of the International Chemical Weapons Convention in 2013.

The US claim is bereft of any logic. Why would Assad use chemical weapons to discredit himself when he is winning the war, liberating territory after territory from the western-backed terrorists? He had also gained from the track of peaceful negotiations. Even Trump had declared that there was nothing to gain from a war with Russia over Syria.

But the Trump administration has reversed itself and has excalated acts of military intervention and aggression. If Trump continues on this path, the US can bring about more dangerous confrontations between the US and Russia, two nuclear powers. It is veritably trying to start a nuclear World War III Russia has suspended the Memorandum of Understanding on Prevention of Flight Safety Incidents it signed with the US. It means Russia may shoot down any US aircraft entering Syrian airspace without authorization from the Syrian government.

Despite his electoral campaign line of avoiding a war with Russia, Trump is now conspicuously in the pocket of the criminal “deep state” in the US, the neoconservative gangs in the US National Security Council, State Department, the Central Intelligence Agency and Pentagon, the military industrial complex that wishes to keep up war production and superprofits and the US oil and gas monopolies that wish to prevent the oil and gas pipelines going through Syria from Iran to Europe. In the meantime, Israel is accelerating its exploration of oil and gas in the Golan Heights and benefitting from the escalation of war against Syria.

The ILPS calls on all-freedom loving peoples of the world to condemn this latest war crime of US imperialism and its collaborators against the people of Syria. The ILPS calls on all its member organizations and allies to issue statements of condemnation and carry out mass actions against this latest US act of aggression which is creating more tension and disorder in the world. #