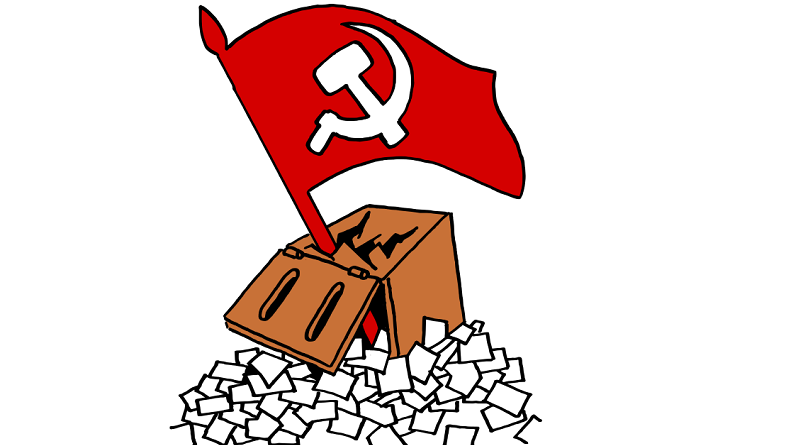 Circus has arrived in the city – the electoral circus! The magical election campaigns of these clowns and magicians are trying to remove everyday misery from people’s minds, along with it’s root cause – the despotism of the owning class. Even the most leftist candidates have a habit of praising Tampere as a good city, but is it really? Continuous mass unemployment and constantly weakening services torment our dear city. Is this a sign of a good city? Not a single election has changed this trend and the regress in decades – is this not an indisputable sign of oligarchy?

We are in favor of people’s power, and that is why we oppose this election show. The poor people, the working class in the forefront, has been on our side on this issue, because according to statistics, the majority of them already refuses to give their vote in elections. Mainly well-off bother to vote, since councils work only for their benefit.

The bourgeoisie owns not only the means of production and banks, but also the state and its municipalities. Such is the capitalist social system in Finland all the way down to the smallest unit of the political system. The city council of Tampere reflects the balance of power between various large capitalist groups, building companies, chain stores and the local bourgeoisie through its decisions. The council’s decisions must serve the enrichment of the rich and the impoverishment of the poor. This bourgeois state organization called the City of Tampere is not “our” or for us. Its property is not common, and its decisions are not in our hands, even indirectly.

The struggle for political power is not taking place in elections. Why would the bourgeoisie allow its dictatorship to be voted away? The only option is a determined class struggle in which the proletariat across gender and skin color builds its own power and challenges the class enemy as a united front. The workers and the rest of the people, you have a right to be angry, and you have the right to rebel – and we communists want to serve your rightful struggle!

The oppressed into united front!

The bourgeoisie has deprived from the people their property and rights, and to secure their class power they have the police and the army, equipped with the latest technology. But these enemies of the people are only a small minority, while the people are an overwhelming majority, who can trust only in their own unity in the struggle. People’s internal hostilities are an obstacle to its unity and a mortal danger.

In particular, racism is a serious threat to the working class, because without the revolutionary unity of the workers of all countries, peoples can be turned against each other. When migrant workers and refugees come to get a living and a life for themselves and their families, the bourgeoisie which is exploiting and oppressing them and all workers is leechig off of our disunity. Why would Finnish workers fight against workers who are from elsewhere? Would not it be better to fight together against the bourgeoisie of Finland, of the EU, and of the whole world? This shall be the starting point for our friendship and our solidarity.

Unemployment has increased in Finland for almost half a century, and the economical depression in the 1990’s made mass unemployment permanent. For the embarrassment of Tampere, this city has had higher unemployment than any other major cities in Finland. Unemployment is not just the unemployeds’ own problem, much less their own fault. Fear of unemployment has forced every worker to submit to the arbitrariness of their bosses, to constantly tighten the pace of work, curb wage desires and finally even to give up their dreams.

When in the elections the question of gender equality is at best about the amount of women in ballots and in the city council, this conceals its class character tied to patriarchy, which is to keep the majority of women exploited and oppressed. Women by no means bear this burden equally, and while the working class majority of women are holding it up many times over, women of the bourgeoisie and privileged strata compete for the place in the sun of patriarchy, maintaining the exploitation of their “sisters”.

Education, and particularly vocational training, is being developed to serve the needs of business life ever more directly. Universities are driven to beg for money from it in exchange of innovations. In vocational training, the business world’s control is the most pronounced. “Enterpreneurial” ways of thinking and course of action are being planted into students, of whom the vast majority comes from the working class and will stay there.

Unemployment affects directly or indirectly the whole working class, the increased part of which is threatened with complete exclusion from the working life. They are driven to crime, to sell more than just their labour power and to resort to livelihood and lifestyles that are in various ways poisonous to the life of the working class and degrading human dignity. All of the forms of oppression are focused on the working class, and especially unemployment is combined with many of them.

At its worst, the unemployment means being excluded from the society, and even the old labour movement have not taken the unemployed seriously. The unemployed have the least to lose in this society and they have the most to gain from the new socialist society, which is dominated by the working class.

What about their money, why not take them? They claim that then it wouldn’t be worthwhile to keep up the production. Good, you bourgeoisie shall step aside and allow the workers to take the production and all of the society into their control – long live the revolution! Although the vast majority in Finland will benefit from the socialist revolution, the bourgeoisie will be opposed to it to the spirit and blood. Instead of begging from the ruling class, we need organizing uniting all members of the working class in their neighbourhoods, workplaces and vocational schools into revolutionary class struggle.

We are being told that without voting you can’t make a difference. Thus it is being recognized that the bourgeoisie state gives only the option of the continuation of the old power. More than ever, the oppressed should abandon the election hustle and direct themselves towards real people’s power by organising itself independently from the municipal administration against the old power. None of the election parties are presenting this option, but instead, at the most, they rely on crumbling illusions of the elections as an arena of struggle.

As more and more abstain from voting in the face of certain defeat, the official “left-wing” will join the right-wing chorus to blame the proletariat for the economical cuts against the proletariat. “Sleepers’ party” does not exist. The people abstaining from voting are for a reason mostly those who are cut the most, and they don’t have a party. Such a party can only the working class’ own revolutionary communist party. A vote for parties that scare with right wing but never fight against it, is a vote for the continuation of the bourgeois class domination and for the continuation of its politics of more miserability. Day by day our “representatives” are revealing that they stand in the camp of the bourgeoisie, and that shall be the only thing we will help them with.

That the cuts target the most vulnerable is not due to them not voting. It tells what is the weight of their voice in this ”democracy”. Why should we believe those to whom the right to vote is the highest good, but the right to food and housing are mere merchandise? Why should we vote as our representatives parties that push us placebo struggle instead of real struggle, and who present the elections as aid in problems whose source they conceal? The source of our suffering is the capitalist system, in which the elections are just puppet theatre of bourgeoisie’s built-in class domination. For the working class to separate into the road of independent struggle, it shall also separate from the official “left”, who coax and threaten us like children.

A growing majority of the working class in Tampere does not support any political party. It has through its own experience already largely bypassed this closest and a most human-faced facade of bourgeois democracy. In municipal elections there is only defeat and disappoinments available to the working class, without any positive teachings of their opportunities. Those can be acquired only in real struggle, into which we orient ourselves through the election boycott.

We do not want to drag the spontaneously advanced part of the working class backwards, but to give an active content and revolutionary direction for the election boycott. We want that the working class together with the people gathering ranks around it, will be encouraged to trust its own strength and learn to build through struggle their own dual power opposed to the municipal administration and the whole bourgeois state.

In fairness, it must be recognized that we, revolutionary communists, are only a handful in Finland and that in many cases we are lagging behind the development of the working class. But we want to learn from the people to serve the people and we want to raise new communists from its deepest ranks to serve the people. We say here only what we know for certain, but it is only a small part of what we must learn from the living conditions, needs and the infinitely extensive experience of the masses.

However, we are convinced that there is only one solution for the existing and growing misery around us – a socialist revolution, in which the working class takes back from the bourgeoisie the riches it has created and steps into the leadership of the whole society. Its ultimate goal is to do away with all classes, oppression and misery. The road is long and winding, but it must be traveled.

For the working class the only way out of this quaqmire of problems goes through revolutionary organising, empowerment from solidarity and change in lifestyle. Destroy the enemy forces, not yourself!

The road to liberation of gender oppressed workers opens up through the organizing of the class positioned working women’s movement. Pave the way for it by struggling against sexism in our homes, schools, workplaces and the fronts of struggle!

Let’s lean on the unity with the persecuted, lift up the most oppressed of our class into the leadership of its struggle and banish the fascists from our communities. Please contact us and gossip about the bourgies, so we can work together to uncover the whole rottenness of the capitalist society. Join with us into unavoidable struggle against our trembling enemy. Let’s keep the Red Flag on the road of struggle, serving the people and the working class revolution!

Spread our declaration in the working class neighborhoods, workplaces and schools, as well as discuss and debate it also after the elections!