In the early morning hours of June 28th of 1969, the New York Police Department raided the Stonewall Inn bar and began assaulting and arresting working class patrons whose presentation didn’t “match” their IDs and genitals. This was a routine activity for the NYPD. However, what followed was not routine nor anything the pigs had planned for. The patrons were fed up and they reacted with righteous violence. In quick succession, a purse was swung, spare coins were thrown, bottles were broken, tables were toppled, and cop car tires were slashed. The footsoldiers of the capitalist class soon found themselves surrounded by pissed off trans women, street queens, butch lesbians, and an assortment of lgbt folks from the bar and joining in from the street.

For the next few hours, the cops had no choice but to cower in fear as the rebellion ensued: bricks brought from a nearby construction site were now airborne, pay meters were uprooted from concrete and used as battering rams, punches were thrown, and fires were set. For every person the pigs tried to kidnap, five would take their place. It was a historic moment when black, brown, and working class lgbt folks displayed their correct understanding that the conflict with the police could only be resolved through violence, and that it is RIGHT TO REBEL.

Since the Stonewall Riots took place, there has been a steady procession of events, organizations, and even a national monument claiming to commemorate this historic rebellion. However, any honest glance shows that most of these (such as Austin PRIDE) are exercises in denial being headed up by a burgeoning Gay Inc. section of the ruling class. While draped in rainbow flags, they spit on the true legacy of Stonewall. Their reformist political outlook, their cop-escorted (complete with rainbow cop cars!) and corporate funded parades, military showboating, “slice of the capitalist pie” pipe dream they attempt to sell to lgbt workers, their wholesale abandonment of trans folks on the streets… all of these stand against what Stonewall was about. Their claims to commemorate Stonewall are nothing more than attempts to disarm its memory in the mind and political consciousness of the masses. These charlatans share more of a legacy with those having bricks thrown at them during Stonewall than those who were doing the throwing.

It is in the spirit of upholding the true legacy of Stonewall that the Revolutionary Alliance of Trans People Against Capitalism announces our Month of Stonewall. We say it without shame: Stonewall was a violent rebellion against the cops! There is no “pride” in lying about that. Furthermore, we say honoring Stonewall today means not only recognizing it for what it was (a righteous but disorganized and undisciplined rebellion), but carrying it forward to its final conclusions: to make revolution against capitalism-imperialism and secure power for working class lgbt people. Without power, we have nothing!

It is with that in mind that we move forward into the Month of Stonewall in Austin, Texas. We will start on June 11th with a collective art-making gathering for proletarian trans folks to put their ignored anger and struggles on paper (drawings, poems, stories, collages, you name it) while discussing real and necessary solution. If enough art is collected, it will be turned into a compilation to display the creativity and the limitless potential for power that is to be found within trans workers. This compilation would be distributed and also used to raise funds for the existing RATPAC Emergency Trans Housing Program. On the 18th, there will be a screening of collected footage from the roots of working class and black & brown lgbt political activity, along with a critical discussion of their achievements, as well as their shortcomings, and the concrete tasks of the struggle for trans liberation today. And on the 28th, the day of Stonewall, RATPAC will have a Stonewall Day of Revolution rally that aims to celebrate and uphold Stonewall’s true legacy, the same legacy the likes of Austin PRIDE attempts to disarm every year with their own fake “commemoration”.

Please join us in upholding the Stonewall Rebellion, and honoring it today the only way possible: by making revolution! 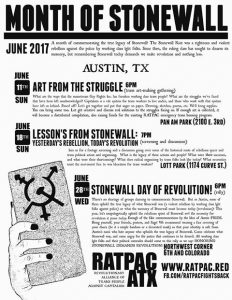