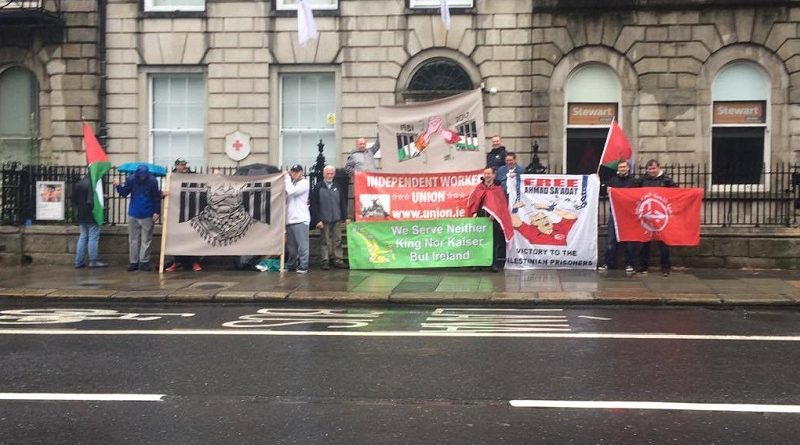 The Popular Front for the Liberation of Palestine received the following statement of solidarity from Irish Socialist Republicans on the victory of the Strike of Freedom and Dignity:

Irish Socialist Republicans express our deepest fraternal solidarity to the Popular Front for the Liberation of Palestine, to the Prison Branch of the Front, to the imprisoned General Secretary of the PFLP, Comrade Ahmed Sa’adat and to all Palestinian Political Prisoners. We salute the courage and steadfast determination of the prisoners in resisting Zionist attempts to criminalise the Palestinian Struggle for National Liberation and congratulate them on the important victory of the Strike for Freedom and Dignity.

Following a mass hunger strike lasting forty days, the Palestinian Prisoners, supported by the Palestinian Masses and international supporters, have exposed the ongoing crimes of Zionism for all to see. The strike for Freedom and Dignity has inflicted a strategic defeat on the forces of occupation and colonialism in Palestine and has acted as an inspiration and rallying cry to struggling people around the world. In Ireland, we know only too well the significance of a hunger strike by Political Prisoners.

In 1981, ten of our comrades from the ranks of the IRA and the INLA gave their lives in Britain’s illegal prisons in Ireland, demonstrating that the struggle for freedom will never be criminalised. In the spirit of those Martyrs, Irish Socialist Republicans will continue to stand in support of the Palestinian Prisoners and your struggle for National Liberation.

On the 100th anniversary of the illegal Balfour Declaration, we stand with you in your ongoing fight against occupation, settler colonialism and imperialism. Irish Socialist Republicans believe that the struggles for National Liberation and Socialism in Ireland and Palestine are part of the one international fight against imperialism.

As the history of Ireland and Palestine demonstrate, resistance is the only path to Freedom and victory. We salute the PFLP and the Palestinian masses for continuing the path of resistance. The world is now in a time of great crisis and international bonds of solidarity are more important now then ever. Now is the time for continuing to build and strengthen the forces of resistance around the world. Irish Socialist Republicans will continue our solidarity work highlighting the struggle for National Liberation in Palestine, confident in the knowledge that every defeat for imperialism is a victory for us all.

Photo: Irish Socialist Republicans protest at the Red Cross in Dublin in support of Palestinian Prisoners on Day 40 of the strike for Freedom and Dignity