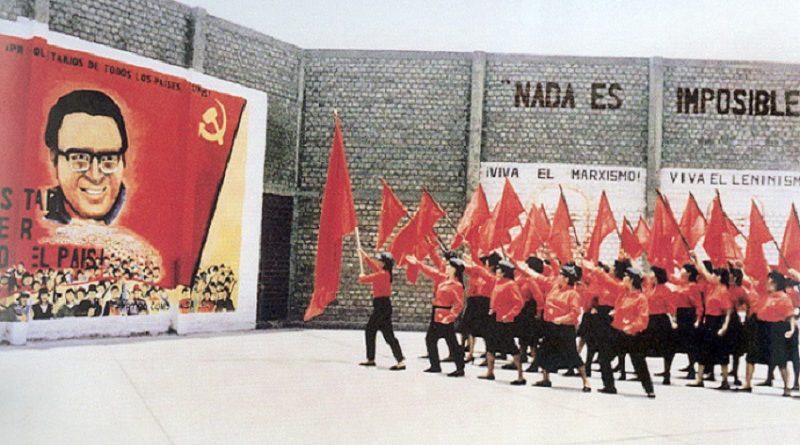 Red is the East, Rises the Sun

One month after the death of Mao Zedong the revisionists, rightists, stuffed shirts, and bureaucrats led by Deng Xiaoping waged a coup within the Chinese Communist Party. The focus of their attack was the revolutionary headquarters led by Zhang Chunqiao and Jiang Qing, two of Mao’s closest comrades, the latter being Mao’s wife. Comrade Jiang, one of the unsung heroes of world revolution, was a fundamental leader in the Great Proletarian Cultural Revolution (GPCR) where she focused on the realm of art, theater, and opera. Imagine your revolution bestowed upon you the power to change things, to obliterate misogyny from the billboards, televisions, and advertisements, imagine all your favorite films with the sexism and bourgeois values removed; now you begin to recognize the importance of Jiang’s cultural work. However Comrade Jiang was not limited to the cultural sphere. In her days leading in the GPCR she would make many important interventions in support of revolutionary workers and against bad ideas like bloodline theory (born “red”, born “white”) held among some of the Red Guards.

For her loyalty to Chairman Mao and for her commitment to making revolution Jiang was arrested and tried in the highest courts—the revisionists wanted blood and they would not stop until the revolution was crushed. Jiang remained defiant: she proclaimed loudly before the world that “Making revolution is no crime”. When threatened with execution she did not fear death and was prepared to die for the proletarian revolutionary cause, stating “let the monkey king give you more heads to chop off”. While the revisionists craved to destroy and degrade the name of Chairman Mao they knew they had to carry out this great reversal of the revolution under Chairman Mao’s name or else the masses would have wasted no time smashing the revisionists in memory of their great helmsman. Jiang reiterated this point by stating that “you are trying to destroy me because you know you can never destroy Chairman Mao”, and before the masses, when the revisionists demanded she yield, her response was only “it is more glorious to have my head chopped off”. Defiant and a rebel to the finish Jiang embodied the principles of continuing the revolution under the dictatorship of the proletariat. She was already in the spirit of what would emerge later as Maoism proper, or Marxism-Leninism-Maoism, which sees Cultural Revolution not only as universal but essential to the success of the communist project as armed struggle. LONG LIVE COMRADE JIANG QING PRESENTE!

The Architect of the People’s War in Peru

Many comrades will invoke the name Gonzalo and but know far less the name La Torre. Augusta La Torre, or Comrade Norah, was a founder of the Movimiento Feminino Popular and coauthor in 1975 of the masterpiece “Marxism Mariategui and the Women’s Movement”, a text which more than any other lays out the foundation for a revolutionary and proletarian feminism. Norah would go on to be the second in command of the Communist Party of Peru (PCP). Chairman Gonzalo in the early days was supported and encouraged by Comrade Norah to launch the People’s War and some claim that Norah held a more firm line on developing armed struggle than Gonzalo did in the period leading up to the people’s war. The first guerrilla attack of the PCP in 1980 was led by comrade Norah after which she went underground to the countryside. The Peruvian People’s War led by the Communist Party of Peru is unlike any other revolution largely because of Norah. The PCP alone claimed the large participation of women from its inception, the burning of the ballots which signaled the start of the Protracted People’s War in 1980 was initiated and carried out by a team of women with only one man. Unlike any other Communist Party before and since the PCP’s central committee hosted a women’s majority. Many of the important branches of the Party were filled by women including the metropolitan Lima Command, at one point run from a women’s prison, which carried out urban assassinations.

Comrade Norah gave her life to the revolution and to the people even while born to a wealthy, left-wing, land owning family. Norah, as well as her brother, mother, and father were all faithful to the cause of the Party founded by Gonzalo and Norah. The La Torre family would sacrifice everything to the cause of the revolution and Norah died underground in November of 1988. Instrumental to the revolution in Peru which would give birth to our ideology Marxism-Leninism-Maoism, Comrade Norah is one of our most beloved martyrs and heroines. LONG LIVE COMRADE NORAH PRESENTE!

Edith Lagos was 19 years old when she was martyred by the Peruvian state on September 2, 1982. 30,000 people would march in her procession.  Those 30,000 people constituted approximately 45 percent of the population of Ayacucho, even though the government had declared it illegal to attend her funeral. What would compel such a turn out? For starters the death of Comrade Edith shows fully how much the masses of people beloved the Communist Party of Peru. Edith had one of the first major criminal cases of any party member and she was known and admired for beating the charges thanks to a team of lawyers who were also supporters of the revolution.

Comrade Edith would go on to lead important actions like the attack on the Ayacucho jail in which she blew a hole into the wall and liberated all of the prisoners, including her captured comrades. In the attack the rebel guerrillas led by Comrade Edith captured many weapons. The capture of weapons was the backbone of the early days of the Protracted People’s War which was started by women with dynamite and not by militarily trained men with high-tech weaponry. In this process we see the reverse of the bourgeois model of warfare which promotes a sexist and anti-people ideology that is reliant on insuring the backward social norms of imperialism. The People’s Guerrilla Army on the other hand transformed the masses into soldiers and transformed their unarmed ranks into a mighty force that within a decade brought the government to the brink of defeat. This was in no small part due to the efforts of women soldiers and leaders like Comrade Edith.

Edith would be captured and bayoneted to death by the state and the world would lose another freedom fighter who at only 19 had made immortal contributions to world revolution. She lives in our hearts as an example of what it really means to be a soldier. LONG LIVE COMRADE EDITH PRESENTE!

On this day we wish to take time to honor our fallen women comrades. These are only three of our tradition’s finest and there are many more whose names were never recorded due to the persisting patriarchy within revolutionary and leftist movements. We must also take this moment to honor the women comrades who command our organizations and populate them. Red Guards Austin especially owes a debt of respect to working women on this day as an organization with a minority of men. We understand the pressing need for women’s war. To all working class women and to all women comrades, we salute you!