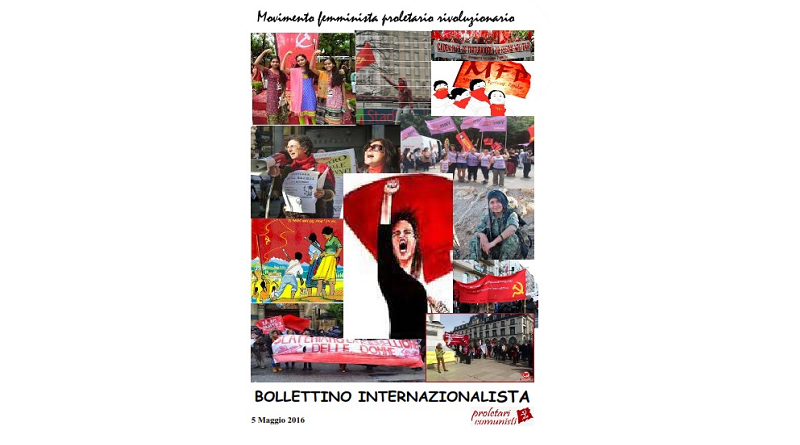 Imperialist States Italy Proletarian Feminism
March 7, 2017August 4, 2017 Redspark Team 8 March, 8 March 2017, MFPR
The Proletarian Revolutionary Feminist Movement is a generated organization promoted by PCm-Italy even before its constitution, to lead proletarian women to revolution, to assert the “revolution in the revolution” and construct a mass vanguard contingent in the women’s movement in general, and to contend with the bourgeoisie, opportunism, revisionism for the hegemony on the women’s movement. Therefore, MFPR works with other women’s organizations placed in the same trench and fighting the same battle throughout the women’s movement both in the imperialist countries and in the countries oppressed by imperialism…..

Concerning the revolutionary proletarian feminism, we stress once more the need for mentioning the complete definition. we do’not agree with the position “Feminism is not something petty bourgeois, it is objectively revolutionary”, is a step backward from MLM position, from the clear definition of Mariategui, who wrote: “we can distinguish three main trends in feminism, three substantive colors: bourgeois feminism, petty bourgeois feminism and proletarian feminism”.

That is why, we also do not agree to simply talk about struggle for emancipation (bourgeois feminists also want emancipation). For the revolutionary proletarian feminists, emancipation means to fight for a socialist/communist society, in which women are part of the proletarian power.

The governments lunch against women and particularly proletarian women the heavy, fierce offensive  at practical, political, ideological level in a framework of modern fascism, in which they combine attacks on living conditions, work conditions, oppression conditions, repression, elimination of rights won by decades-long struggles in the imperialist countries, e. g. abortion. The sexual violence is the obvious consequence and the tip of the iceberg of such attacks. And each attack leads to a more and more violent oppression, discrimination, repression on all spheres (for instance, the ban of veil for Muslim women leads not only to prohibit its use, but also to increase the terrorist campaign of imperialist states against the peoples, migrants).

Millions of women from different countries will mobilize on March 8, and they will fill the streets all-around the world to strongly say “NO” to the imperialist, capitalist and patriarchal attacks on women. But there is a novelty in this: in many countries the women’s movement is taking up the crucial and strategic weapon of the “women’s strike”. And in some countries, such as France, Iceland, the workers women themselves are those who grasp it.

Some revolutionary and mlm forces not give the due worth to this important change, which confirms the correctness of the line of the women’s strike, we worked out, proposed and achieved over the last three years, as a key weapon of the proletarian women to bring their own class and combative contents and and their autonomy from the bourgeois and petty bourgeois feminism, in the revolutionary march of women.

Vanguard women struggle against “chauvinism and racism” against women,. In Italy, for example, this issue is less than secondary. Indeed, as we told you, in many struggles of migrants, mostly males, the women, comrades are those who lead them. The most important is the condition of migrant men and women in our imperialist countries, women who find the death on sea or are rapes, violence, humiliation by cops, soldiers in “concentration camps” in our countries. That is what we should denounce.

Also on the patriarchy, the condemnation is not neutral, even here here we have the positions of the bourgeois and petty bourgeois feminism, and the stand and struggle of the proletarian revolutionary feminism.

The milestones of the history of humanity October Revolution and the GCPR,  have meant for women, a revolution in the revolution, in which women took directly in their hands the revolutionary struggle to transform earth and sky, to destroy all oppressive practice and ideology.

If we do not make the “assault to heaven” of Mao live, the call to apply Maoism becomes a “faith” and not a flame that enlightens the path. It is not this way that the MLM comrades can be recognized by women as the vanguard of their movement.

Clara Zetkin herslef, whose sentence is quoted in the draft, told women “rise up against capitalism”, and not simply says “unite with the working class”- furthermore, many women are themselves working class, they are proletarians.
….it is important  the leading role, as a way to the whole women movement, of the women fighters, the revolutionary communist women in the people’s wars, ..we  strongly  marks the role of women comrades of CPI(M) who in India, one of the largest subcontinents in the world, in the heart of the contradiction between imperialism and oppressed peoples, are making alive the strength of women in all the spheres, and giving contribution to all women in the world, as had already occurred in Peru, Nepal and as occurs today in Turkey/Northern Kurdistan.

This March 8 we and our struggle are close to the women in arms who in the people’s wars are fighting and giving their blood contribution to the new democratic revolution, marching towards socialism, which is fundamental to achieve their emancipation and liberation. As well as we are close to the women who, from Palestine to Rojava, are playing their role in the front line, even when they are not inspired by the revolutionary science of MLM, fighting the reactionary regimes and forces, both at the service of imperialism, which aim to crush women under new dark coils of feudal oppression.

on March 8th women it is good should march alone, because it is the fury of women as a mighty force for the revolution that must march and be clearly visible this day. This is their international contribution to the unity and construction/strengthening of MLM parties, which must have as a “principle” to lay the ideological, theoretical, practical, organizational grounds for the full development of women’s battle.
The MFPR clearly states that without proletarian women there can not be proletarian revolutionary feminism, therefore it is in the factories, the places of precarious work, the areas of female unemployment, the slums and migrant camps that it builds its root and strength.
This is the fury that begins unleashing and this is the way to understand and allow the Maoist parties, born or under construction, make proletarian women a powerful first line, a plus in the ideology, politics and practice.
MFPR -Italy
8th march 2017