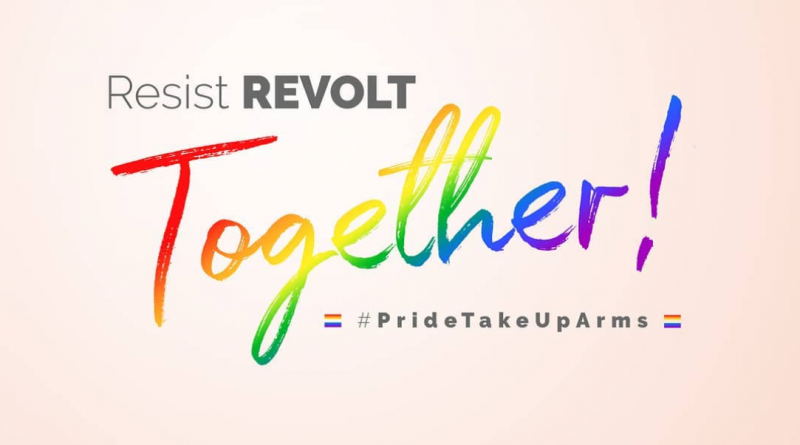 I wish to express my solidarity to the Filipino LGBT community and in spirit join the Metro Manila Pride March set for today in Marikina City. I congratulate the organizers for bringing together LGBTs and allies in this march for equality, and against injustice and oppression.

I congratulate you for choosing “Resist Together” as the theme for Pride March 2019. It highlights the importance of collective action in the history and achievements of the LGBT struggle. It honors the LGBT resistance started by the 1969 Stonewall Uprising, and the first Pride March in the Philippines and in Asia in 1994 spearheaded by the Metropolitan Community Church Manila (MCC Manila) and the Progressive Organization of Gays (ProGay).

This theme is also timely and appropriate inasmuch as we are confronted by a regime that is tyrannical, treasonous, patriarchal, misogynist, mass murdering, corrupt and mendacious. The foul-mouthedness of the tyrant is often spiced with misogynist and anti-gay expletives.

The history of the now-global Pride March is a history of LGBTs collectively fighting for their rights against police brutality, against discrimination, and against a rotten system that excludes, dehumanizes and demonizes LGBTQIs. I join you in honoring and carrying forward this fighting record of LGBTs.

The LGBT community is a major part of the Filipino people. LGBTs have joined and even led movements and campaigns for the advancement of greater freedom, democracy, social justice, all-round development and international solidarity for peace against imperialism and all reaction.

LGBTs have thus played a major role in the struggle for national and social liberation against the four evils of foreign monopoly capitalism, domestic feudalism, bureaucrat capitalism and patriarchy.

The Communist Party of the Philippines has accorded full civil, political, economic, cultural, and social rights to LGBTs in guerilla zones and territories of the provisional revolutionary government.

The CPP has long been affirming and welcoming all LGBTs who seek to overthrow the corrupt system that perpetuates hate, discrimination and oppression. Many LGBTs have taken up the cause of revolution and have become Red fighters and Red commanders of the New People’s Army. We admire their brilliance and bravery.

For 25 years now, the CPP rules on the relation of sexes have included a non-discrimination clause that guarantees LGBTs enjoy the right to love and be loved while in pursuit of revolutionary goals. Yes, marriage equality has long been a part of life in the revolution.

The 12-point program of the National Democratic Front of the Philippines has also included a provision for the cause of LGBTs. When the revolution wins, equal rights and non-discrimination would be part of the law of the land.

The worsening crisis of the ruling system under the homophobic and misogynist Duterte challenges LGBTs to political action. This is a president who claims to have been “cured” of his gayness, and uses the word “gay” as an insult. LGBTs are way more decent, more courageous, and more patriotic than Duterte.

LGBTs thus cannot rely on Duterte for the passage of the Anti-Discrimination Bill. We must depend mainly on the collective action of LGBT community and the support of the Filipino people who had been dubbed as among the “most gay-friendly” in Asia.

The LGBT community deserves the highest appreciation for having persevered in the struggle against discrimination. It is truly admirable that the number of participants in the Metro Manila Pride March have grown for the past years, especially in 2018. More towns and cities have also held their own Pride marches and parades.

I hope that Metro Manila Pride 2019 will achieve the utmost success in upholding, defending and promoting the rights of the LGBT community. Your commitment and your activism would surely earn the respect, admiration and support from allies and from the entire Filipino people.

Beyond Duterte, there’s a country to save and a world to win. The revolution is open to all and fights for all. Let us resist together today, and build a new country and a new world without exploitation tomorrow. ###