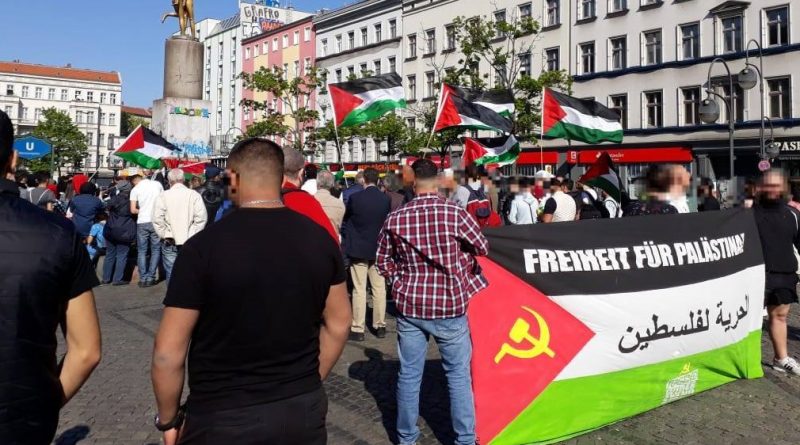 On Wednesday, 26 June, state repression continued to escalate in Berlin, Germany, as Berlin police and right-wing media outlets promoted a series of raids and searches at the homes of nine alleged members of Jugendwiderstand (Youth Resistance), a left revolutionary youth organization that fights fascism and upholds Palestinian rights as well as supporting liberation struggles around the world. After a series of repressive attacks, the group dissolved itself earlier in June, but the raids and attacks have continued.

According to media reports, police allegedly accuse the Jugendwiderstand members of “attacking” two events. First, they accuse them of engaging in militant confrontations with the open neo-Nazis that parade through Berlin each year in the “Rudolf Hess Memorial March” protected from antifascists by the Berlin police. Despite the German government’s cynical use of the term “anti-Semitism” to oppose advocacy for Palestinian rights and criticism of Israel, actual Nazis and anti-Semites who celebrate Nazi leaders are provided with extensive, expensive protection against leftist demonstrators.

In one article, the Berlin Union of Police expressed its support for the “fundamental right” of the “freedom of demonstration,” accusing leftists of “hypocrisy” for seeking to shut down racist Nazi marches. On the other hand, this alleged concern for freedom of expression is nowhere to be found when police issue political bans against Palestinian speakers and activists like Khaled Barakat with reference to spurious allegations of “anti-Semitism,” which they equate to nothing more than “anti-Israelism.” This trend is truly appalling, obscuring the real history and threats of Nazi anti-Semitism while instead attacking leftists, Palestinians and Arabs.

Secondly, the members of Jugendwiderstand are accused of attacking a “pro-Israel gathering” on 12 September 2018. It should be noted that they were actually seeking to informally defend the location of a speech by Palestinian activist, land defender and former political prisoner Manal Tamimi from a group of pro-Zionist, pro-apartheid counterdemonstrators who wanted to see Tamimi’s speech shut down in its new location. Tamimi’s speech was driven from its original venue by threats to cut the funding of an Iranian refugee organization by “leftist” Berlin officials.

These police attacks have followed a series of media propaganda pieces against Jugendwiderstand activists. Jugendwiderstand has been one of only a few left organizations in Berlin to clearly uphold Palestinian rights on a principled basis as part of a commitment to opposing colonialism and racism and supporting national liberation struggles. This has been a key point in the ongoing propaganda pieces aimed at criminalizing both support for Palestine and resistance to fascists in Berlin.

One of the articles reporting the raids in the Berliner Morgenpost has no qualms in labeling both Jugendwiderstand members and Manal Tamimi “anti-Semites” and noting that the Israeli occupation labels her, as an opponent of that occupation, a terrorist; at the same time, it expresses concern about neo-Nazis who were “stuck in Brandenburg” after trains were allegedly sabotaged by anti-fascists to protest their march. The terms “anti-Semite” and “anti-Semitic” are nowhere used to describe the actual neo-Nazis participating in a “Rudolf Hess Memorial March” – further illustrating the degradation of this term in anti-Palestinian propaganda.

Another mainstream press article, this time in the Tagesspiegel (the newspaper that led the anti-Palestinian campaign against Rasmea Odeh), openly labels the raided activists “thugs” within the text of what might be expected to be “objective” coverage. Also within the text of the article, the Tagesspiegel writers take credit for inciting the raids “based on their information.”

Samidoun Palestinian Prisoner Solidarity Network expresses its strong solidarity with the leftists and former Jugendwiderstand members who have come under attack. This is part and parcel of the ongoing, escalating state repression targeting leftist voices and, in particular, Palestinian and Arab communities.

It is no accident that police spokespeople affirm their commitment to the “freedom of expression” of anti-Semitic neo-Nazis through raids on leftists only days after shutting down a Palestinian event against the “deal of the century” and imposing a political ban on Palestinian writer Khaled Barakat. From the anti-BDS resolution of the Bundestag, to the account cancellations and forced resignations of Jewish groups and leaders who criticize Israel in any way, to the criminal prosecution of people who interrupt Israeli officials responsible for the war on Gaza to the deportation of Rasmea Odeh, it is critical to confront the escalating repression in Germany with international solidarity.