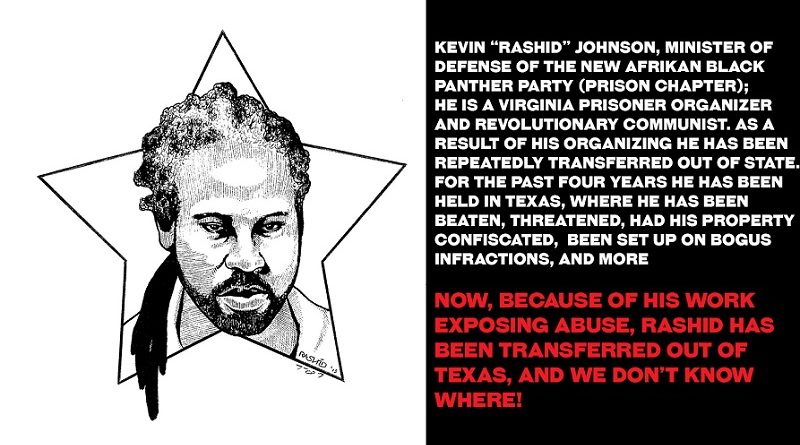 Supporters have received word that Kevin “Rashid” Johnson was picked up by Virginia officials and removed from Clements Unit on Thursday, June 23rd. He is no longer being held by Texas Department of Criminal Justice.

Thanks to so many people phoning Virginia Interstate Compact Supervisor Terry Glenn, we have found out that Rashid is now in Florida at a “reception facility”. However, we do not know where that is, if he can receive mail there, or where he will end up. We will keep you informed as we find out more, and in the meantime will be asking people to phone Glenn back on Monday.

Rashid is Minister of Defense of the New Afrikan Black Panther Party (Prison Chapter); he is a Virginia prisoner organizer and revolutionary communist. As a result of his organizing he has been repeatedly transferred out of state, under a setup called the “Interstate Compact” which is used to remove rebellious prisoners and exile them to locations where they have no friends, support, etc. For the past four years Rashid has been held in Texas, where he has been beaten, threatened, had his property confiscated,  been set up on bogus infractions, and more — nonetheless, he used his time there to forge connections with other prisoners and to write a series of powerful exposés about violence, medical neglect, abuse, and murder in the Texas prison system.

Transfers can be opportunities for prison officials to arrange for violence and abuse. Rashid was beaten when he was first brought to Texas, and lost much of his property at the time. Outside supporters and people concerned about prisoners’ rights and basic human dignity need to make sure this does not happen again!

I am calling on behalf of Kevin Johnson, Virginia inmate number 1007485. I am a friend of Mr. Johnson’s, and am highly concerned for his well-being and safety. I understand that he was recently taken by Virginia Department of Corrections from Clements Unit in Amarillo, TX, and is now in Florida.

What prison is he being held at? Can he receive mail? When will he receive his property?

I demand that ALL of his property, including ALL his legal materials and his typewriter, be given to Mr Johnson as soon as possible, and that his transport be safe and humane.

Please let us know through the comments or by email ([email protected]) if you are told where Rashid has been moved to, or what you are told.