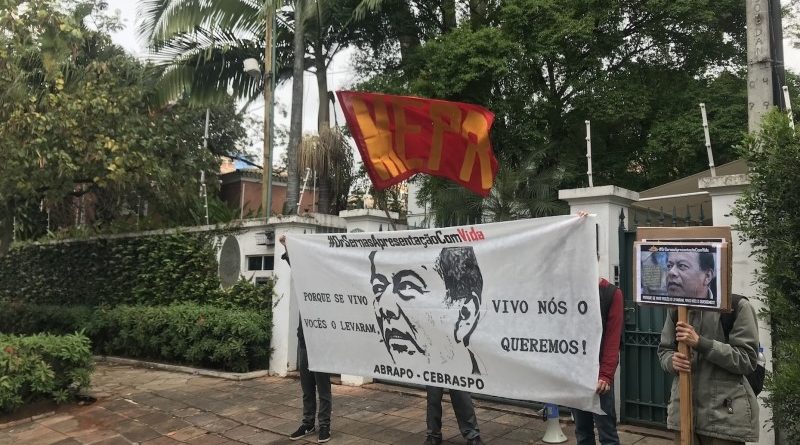 An important demonstration organized by the Brazilian Center for Solidarity with Peoples (Cebraspo) and the Brazilian Association of People’s Lawyers (Abrapo) took the entrance of the Mexican consulate, in São Paulo, demanding the reappearance with life of Dr. Ernesto Sernas García, a people’s lawyer and Mexican university professor, on September 17. The action was part of the international campaign for this purpose.

During the demonstration, after reading the manifesto, one of the participants entered the consulate and filed the document, which explains the importance of Dr. Sernas and the reason for his disappearance, as well as blaming the high level of the State of that country for the fact.

“Dr. Sernas is a law professor at the Universidad Autónoma Benito Juarez de Oaxaca (UABJO), an essayist, researcher, lecturer, and lawyer of the legal defense front of the 22 militants of the Sol Rojo People’s Current detained and prosecuted for terrorist offenses and possession of explosive material for the exclusive use of the Armed Forces, within the judgment-farce assembled by the old bourgeois-landlord state against the organization. Due to his breadth of knowledge and commitment to the causes of the people, Dr. Sernas was able to demonstrate that the whole process, accusations, evidence, etc. were a montage created at the top of the reactionary state. Thus, his disappearance points to the clear and sinister participation of the deepest circles of the old state and the Mexican government,” the document accuses and denounces.

This is the second public act in solidarity with Dr. Sernas held in the country. The first occurred in Rio de Janeiro, on September 5. In addition to the demonstrations, the campaign for Dr. Sernas’s reappearance has been circulating in universities and among the people, among progressive intellectuals, lawyers and democratic fighters.