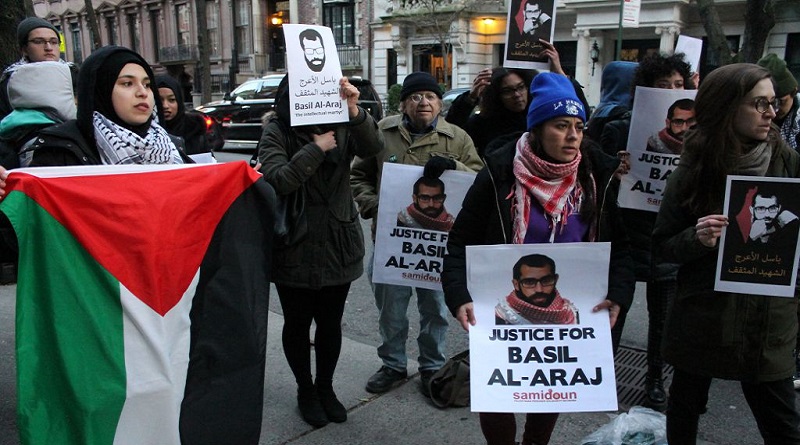 Palestinian and international protests continued as Mahmoud al-Araj, the father of Basil al-Araj, filed a complaint on Tuesday, 14 March against Palestinian Authority officials and directors of the security services. The elder Al-Araj was beaten on Sunday, 12 March by PA security forces alongside many other protesters denouncing PA security coordination with Israel. His son Basil was murdered by Israeli occupation forces on 6 March 2017 when they invaded the home where he was staying in El-Bireh.

Basil al-Araj and five of his comrades had been arrested by PA security forces in April 2016 in a case touted at the time by PA President Mahmoud Abbas as an important achievement for PA/Israel security coordination. They were tortured and imprisoned for five months without charges before being released after a hunger strike that received widespread Palestinian attention and support. Four of Basil’s comrades, Haitham Siyaj, Mohammed Harb, Mohammed al-Salameen and Seif al-Idrissi, have now been seized by Israeli occupation forces and are held without charge or trial under administrative detention. Al-Araj went underground and his family was repeatedly harassed by occupation forces, their home invaded in the middle of the night and their belongings ransacked, before al-Araj was shot dead by occupation forces as he resisted on 6 March. Israeli occupation forces have continued to deny the return of Basil’s body.

Protesters took the streets in Ramallah on Sunday, 12 March against the PA court system continuing criminal charges of “possession of an unlicensed weapon” against al-Araj and the five, four of whom are held in Israeli jails. While the charges against al-Araj were dismissed, the other four’s PA trial was continued until 30 April, with the statement that they may be released from Israeli jail at that time.

The protesters, including al-Araj’s father, were attacked with batons, tear gas, sound grenades and rubber bullets. Many were injured and several arrested; Mahmoud al-Araj was taken to hospital. Along with lawyers Farid al-Atrash and Anas Barghouthi, he filed the complaint against a series of PA officials, including Adnan al-Damiri, the spokesperson of the PA security forces, Sliman Qandil, head of National Security, Abdel-Latif Qaddoumi, chief of Ramallah police, and generally against police and security forces who participated in attacking demonstrators on 12 March. The complaint includes the use of excessive force, attacking a peaceful protest, making false statements in the media and defamation; al-Damiri engaged in public statements attacking the demonstrators, labelling them “mercenaries” and foreign agents, following the violent assault on them by PA forces.

Thousands of Palestinians also took the streets on 13 March in Ramallah, marching from Manara Square in protest of the attack by PA security forces, while demanding an end to PA security coordination with Israel. The mass marches in Ramallah included demands for PA officials, including Mahmoud Abbas, to resign. The demonstrators also emphasized the importance of supporting and protecting Palestinian resistance strugglers.

As the large march wound through Ramallah, demonstrations were organized by young Palestinians in New York City and Washington, DC. On Sunday, 12 March, protests were held in Brussels, Berlin, Vienna, London, Amman, Beirut, Tunis and Rabat demanding justice for al-Araj and an end to PA security coordination.

In New York City, around 40 people gathered to demand justice for al-Araj. Zachariah Barghouti, other PYM representatives and speakers from a number of Palestinian and solidarity organizations, including Samidoun Palestinian Prisoner Solidarity Network, Existence is Resistance and Decolonize this Place, addressed the rally, as well as a number of young Palestinians who knew al-Araj personally. Participants chanted in Arabic and English and left signs and posters at the door to the mission, expressing the demands of the protesters. Adnan Farsakh of Samidoun led spirited chants in Arabic, denouncing Israeli assassination and PA complicity.

“Basel’s unrelenting passion for freedom and justice should be an example for us all. Basel was a hero and freedom fighter. And we have to honor him by securing liberation for Palestine!” said Michela Martinazzi of Samidoun. Another Samidoun activist read the statement about al-Araj’s assassination by Israeli occupation forces.

The PYM presented a statement noting that the protests in New York and Washington were denouncing the killing of Al-Araj by occupation forces while simultaneously demanding accountability for the PA’s role in his assassination due to security coordination.

In Washington, DC, protesters gathered amid falling snow outside the PLO General Delegation to the US. Jehad Salim spoke, delivering a speech in Arabic mourning Basil al-Araj. In his speech, he denounced the Oslo agreements and all that has followed from them, including the PA’s security coordination with the Israeli occupation.

“Al-Araj’s assassination is a continuation of the sordid Israeli practice to eliminate Palestinian leaders and undermine the national liberation movement. Rather than protest these murders and Israel’s use of lethal force against civilians, the PA continues to collude with the Israeli occupying power, thus exacerbating the vulnerability of nearly four million Palestinians residing in the West Bank, including East Jerusalem, and the Gaza Strip,” noted the call for the protest.

Samidoun Palestinian Prisoner Solidarity Network is organizing another protest against the assassination of Basil al-Araj on Friday, 17 March at 5:30 pm outside the Best Buy electronics store in Union Square. The protest will also highlight the growing international campaign to boycott HP for its involvement in Israeli colonization and apartheid while demanding justice for al-Araj. All are invited to attend the Friday protest.