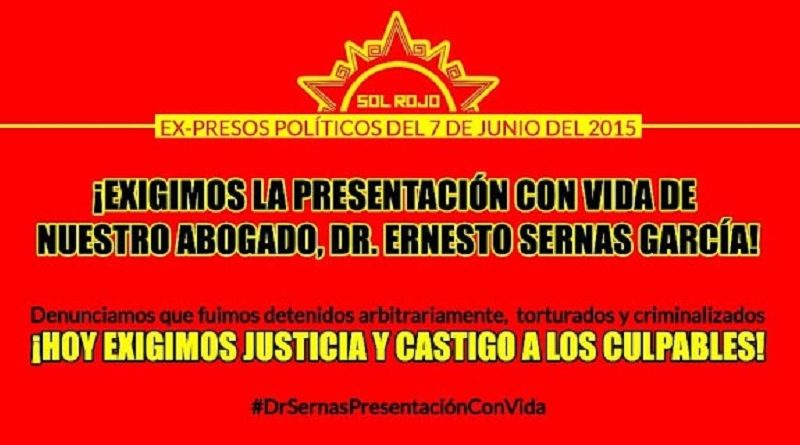 To the proletariat and workers of Mexico and the world

To the oppressed nations and peoples

To the democratic and internationalist organizations

To the International Communist Movement

Corriente del Pueblo Sol Rojo makes known that recently, our 22 comrades accused of the offences of terrorism and possession of explosives reserved for the use of the Mexican army, have been declared acquitted.  They were arrested on June 7, 2015 in the city of Oaxaca and processed in the federal criminal case 30/2015.

Our comrades were detained in Federal High-security prisons, as no are the CEFERESOS No. 4, 5 and 13, of Tepic, Nayarit, Villa Aldama, Veracruz, and Mengoli, Oaxaca respectively, as well as the CERESO 2 of Villa de Etla, Oaxaca.

During the fourteen months of prison and the three years that the criminal process against them lasted, our comrades’ defense – led by the Doctor in law Ernesto Sernas Garcia – managed to prove that the entire criminal process was a montage, a sham trial, where arbitrary detention, torture, isolation, incommunicado detention, concealment of information, fabrication of offences and of evidence were committed by the old landowner-bureaucratic State against the accused.

After a series of means of evidence prepared by the masterful defense of Dr. Sernas García, two other co-processed people within the same criminal case obtained their acquittal, one of them days before May 10, when our legal defender comrade was disappeared by elements of the State, without the Office of the Prosecutor having shown any advances so far in the investigation which they permitted to find the whereabouts and presentation with life of this democratic lawyer, defender of the rights of the people.

The acquittal of all the defendants in criminal case 30/2015, even those whose defenses were performed in parallel to our 22 comrades, has been the product of the intellectual work and the effort of Dr. Sernas García, whose strategic litigation has managed to prove not only the innocence of our comrades, but the responsibility of the old and outdated State in the criminalization of the people’s fighters.

Today with the acquittal of the SolRojista militants, our Organization along with other democratic and revolutionary organizations make an honest acknowledgement to the memory of our beloved comrade Javier López Martínez, “Comandante Rojo,” who was also a political prisoner of June 7, 2015 and confronted prison with fortitude, being released along with the rest of his peers and who unfortunately passed away in March of 2018, so we say that with this acquittal, comrade Comandante Rojo has also been acquitted of any charge and must be recognized as such by all the people.

In the same way we make sincere recognition of the work contributed by Comrade Ernesto Sernas Garcia, whose commitment to the struggle of the people has motivated the most rabid and irrational hatred by the old State, which we hold responsible for his forced disappearance. With this in mind, our absolved comrades and the whole of our Organization reaffirm our commitment to the family of Dr. Ernesto Sernas Garcia, in the indispensable struggle for his presentation with life and for punishment of the guilty, and we emphasize that we will strengthen our actions within the framework of the International Campaign #DrSernasPresentaciónConVida.

We are grateful for the support and class solidarity of various democratic and revolutionary organizations on the national and international levels. The acquittal of the SolRojista political prisoners, is also a victory shared with all of you.

We demand the release and acquittal of all political prisoners from the International Communist Movement, especially of the 23 youth of Brazil and in particular of comrade Igor Mendes, of comrade Dallas from Austin, USA, of comrades Dr. G.N. Saibaba and Varavara Rao in India, of comrade Georges Ibrahim Abdallah in France, of comrade Marguerita Calderazzi in Italy, among many other sons and daughters of the proletariat and the oppressed peoples of the world who, just like the SolRojista militants, have risen in open rebellion against the old order in their respective countries as part of the tasks of the world proletarian revolution.

Freedom to the political prisoners!

Because alive he was taken, alive we want him!

Proletarians and peoples oppressed of all countries, unite! 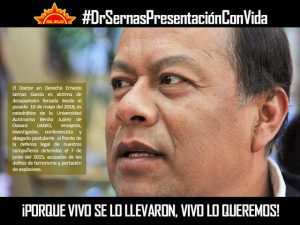 THAT THE WORKERS RULE THE COUNTRY!

WITH SOL ROJO, THE PEOPLE WILL WIN!