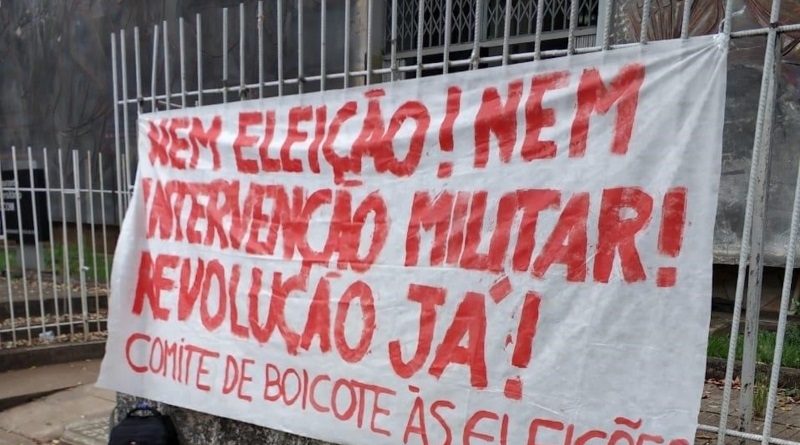 The Brazilian electorate has 147 million registered voters, of these only 115.7 million attended polls handing out their preference to Jair Bolsonaro with 57.7 million and Haddad with 47 million and their rejection with 11 million blank and null votes. Blank and null added to 31.3 million make 42.3 million of voters who refused to participate in the most rotten election causing envy to the feudal lords of the “old Republic”.

The farce begins with the invention of “valid votes” to evade the truth of the preference of the majority of the electorate (half plus one of the 147 million registered voters or 73.5 million plus one) not obtained by any of the candidates. Thus, the winner only represents just over one-third of the registered electorate (38.7% or 57 million votes).  Not to mention those excluded from the registry and the young people who are entitled to vote and refused to register.

This is the result of a sordid campaign through social networks stirring up panic and fear among the electorate, sometimes threatening with ghosts, sometimes with flash flooding of fake news. All this to create an artificial climate of passion and anger and obscure reason. The more evidence of this cabal’s farcical character is to reach a dispute between deceivers of the electoral, opportunist false left and new deceivers of the extreme right. The farce of winning by accusing your opponent of living by lies using bigger lies, even accusing them of being Communist. A more pathetic show couldn’t represent the bankruptcy of the electoral farce of this semicolonial/semifeudal little republic.

But the rejection of the electoral farce, which resisted the violent pressure to choose between one and the other single party candidate, must be taken very seriously, because that signals that a good part of the Brazilian people is not caught up in the campaigns of the two candidates, despite pressure from the reactionary members of the religious aristocracy or opportunistic artists and intellectuals who refuse to understand that the political situation in Brazil only reached this point as a result of the disastrous policy of reconciliation of the PT.

As the wheel spins the day following election day, it is the day to wake up and see how to dismantle the promises which are made to the poor to deceive them again and assemble a Government to the taste of the landowners of agribusiness, the big bourgeoisie and imperialism mainly Yankee.

Like vultures, the power groups of the ruling classes contest with each other and watch the movements of the electorate, to collect their support before others can eat into the coveted morsels.

Having made a campaign on the basis of “he said she said,” the pressure of the vulture’s game, called central, for positions in the State structure that the elected has promised to reduce by half; the Confederation of industry for tax waivers and other incentives and agribusiness by the maintenance of privileges, inevitably will lead the current crisis to abysmal levels, sinking the production, more unemployment, hunger and misery of the people, with a reduction of funds for health, education, transport, housing, etc, except for (in) security, which will boost the out-of-control repression against the poor of the countryside and town, in the name of combating “organized crime”.

To try to contain the inevitable popular rebellion against the brutal exploitation used to contain the fall of local and transnational monopolies’ profits, and as the only way to save the system of its collapse, the counter-revolutionary preventive military coup which was put into march, took institutional form with the rise of the reformed captain to the management of the old State.

Undeniable fact is that the Brazilian people, after the disastrous experience of fourteen years of illusions of PT electoral opportunism to put the brakes on the class struggle, will still have to prove that the lie has short legs and realize that only with their mobilization, politicization conscious and revolutionary organization can overthrow the old order which is supposedly renewed, and build true democracy, through the democratic revolution.