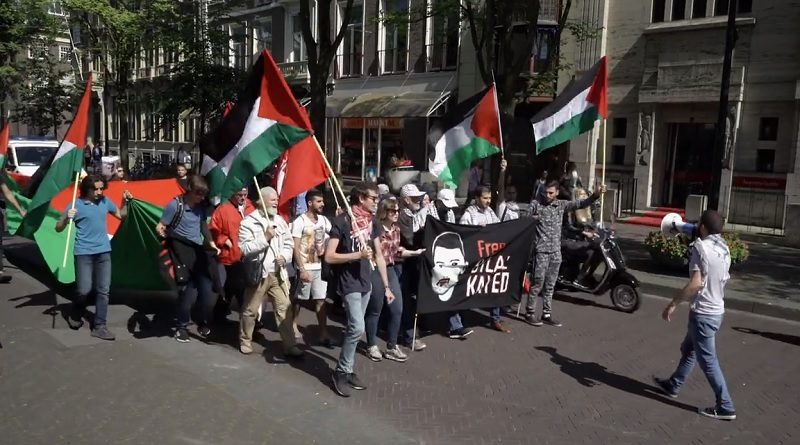 On Friday 24 June, a group of thirty people protested in The Hague for the freedom of Palestinian political prisoner Bilal Kayed and against state pension benefits for Israeli settlers. The action was supported by a dozen organizations and was part of international protests for the freedom of Bilal Kayed in dozens of cities, including New York, Berlin, Brussel and Paris.

While Bilal Kayed is being imprisoned illegally by Israel, the Dutch government is paying illegal state pensions to illegal settlers in the West Bank. The state pension for illegal Israeli settlers is higher than that for older people in The Netherlands! The Dutch government is also trying its very best to pay as little social benefits as possible to Moroccan-Dutch and Turkish-Dutch citizens who emigrate. The Dutch state pension for illegal settlers goes against international and Dutch law. We demand an end to the support for the colonization and occupation of Palestine.

Along the route from the Central Station to the Drees-monument, chants were shouted such as ‘free, free Bilal Kayed’ and ‘geen AOW voor kolonisten’ (‘no state pension for settlers’). Flyers were distributed to bystanders and the message of the protest was spread. Some bystanders spontaneously joined the protest.