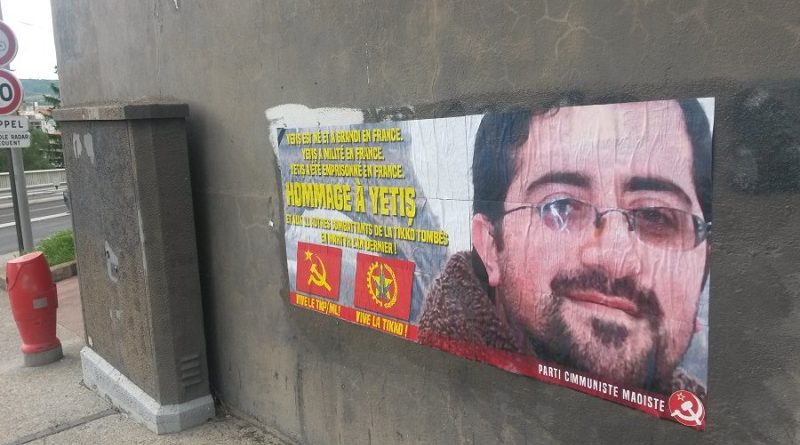 It’s with a great pain that we learned the death of Yetiş Yalnız and his eleven comrades of TIKKO.

We express our condolences to the comrades of the TKP/ML, the TIKKO and their front organizations, and also to the families of the martyrs.

We want to pay a special tribute to Yetiş because we had the chance to know him.

Yetiş was first and foremost an exceptional human being.

Yetiş was born in France and grew up there in Nevers, then in Strasbourg.

Yetiş comes from a family of exiled Communists from Turkey who is aware that the struggle for revolution continues in France and wants to change the society.

Yetiş was a son of the people, and it is quite natural that he committed himself at an early age to fight the capitalist oppression in France in Nevers, Strasbourg and then in Paris.

Yetiş was an example of altruism and each and every one of his comrades of YDG, and beyond, recognized him as a respected organizer and leader.

Thus, Yetiş very early took important responsibilities and was enthusiastically involved in the YDG for example through the newspaper “L’audace” and more generally the organization of democratic youth in France.

Demonstrating unflagging involvement as an exemplary communist leader, he was at the forefront of all struggles. It is for this reason that the French State has monitored, tracked and imprisoned him through its anti-terrorist judges.

Yetiş then decided to take part in the Protracted People’s War in Turkey within the TIKKO.

Finally, Yetiş was a remarkable singer and player of saz. If he gave up a career as a professional artist, it was because it took too much time to allow him also to be the activist he wanted to be.

He reconciled art and revolution through his songs and performed in parties and festivals of revolutionary organizations without sectarianism. In the army he was a member of the TİKKO Müzik Topluluğu.

Yetiş, you humbly fought concretely for communism. May your memory serve as an example and guide us. Let us carry high the flag of the revolution!